The population is predominantly Albanians. According to the 1989 census, they accounted for 98 percent of the population, with minority elements of Greeks and a smaller number of slaves, mainly Macedonians. The figures have been questioned from both Greek and Northern Macedonian, but have their biggest defect in underestimating the minority groups Roma and Vlachs (Arumans). According to Countryaah, the lack of precision in the population statistics is reinforced by the fact that the Albanian population has undergone a very marked, albeit quantitatively difficult change since the fall of the socialist regime. Population growth declined sharply in the late 1900s as a result of declining nativity and extensive emigration. During the 2000s it has again increased.

The other major change, which is also behind a significant part of the uncertainty that permits population statistics, is labor migration. The figures on the number of Albanians, with or without a permit, are mainly in Greece but also in Italy, but 250,000 to half a million are common estimates. Much of this emigration, which is to some extent seasonal, has taken place from the southern and central parts of the country. In particular, the Greek minority seems to have seized this opportunity. Young, well-educated people are also over-represented among those who move. The emigration, together with the decrease in birth rates, is also believed to have contributed to changing the gender distribution of the population over the course of less than ten years from a surplus of men to a deficit.

Moving within the country has further increased significantly. From having been regulated with domestic passports, residence permits, household registers and workbooks, the population is no longer subject to any legal restrictions on geographical mobility. In particular, the residents of the mountainous hinterland, and especially in northern central and northeastern Albania, have taken advantage of the new opportunities, with a rapidly growing population in the lowlands in the west as a result.

Immigration to the larger cities, the vast majority of which are located in the lowland areas to which many have applied during the late 1900s and early 2000s. The capital of Tirana is generally believed to have doubled its population during this period, to 400,000. 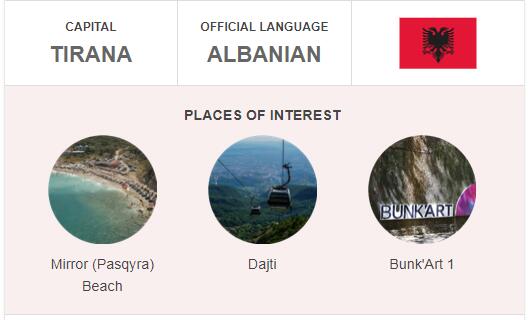 The official language and mother tongue of the majority of the population is Albanian, an Indo-European language. The Albanian can be roughly divided into two main dialect groups: Gaelic in northern Albania and Tuscan in southern Albania. The boundary between the dialect areas is considered the river Shkumbin. The written language, gjuha letrare shqipe (‘the Albanian language of literature’), has been largely standardized since the 1970s.

Christianity has been established in the country since the 100s. During the 11th century, the East Roman Church conducted a mission in the area, while the Franciscans established themselves there in the 1300s, in connection with Venice’s increasing influence.

Under Ottoman supremacy, Islam was introduced, and several waves of Islam crossed the country in the following centuries. Over time, Sunnis and various dervish orders, including bektashi, which comprised about 20% of the population, came to dominate. An autocephalic Albanian Orthodox church was proclaimed in 1927 but was first recognized by Constantinople in 1937.

According to the 1945 census, more than 2/3 of the population professed Islam, 1/6 were Orthodox Christians (concentrated in southern Albania) and 1/10 of Catholics (mainly in the north). During the land reform in 1945, the land holdings of the religious institutions were confiscated. The following years entailed a growing anti-religious policy, which largely turned to community leaders and schools. In 1967, Albania was proclaimed the world’s first atheist state, and all public religious practices were banned.

There is now freedom again to practice their religion, and Islam is officially recognized as the dominant religion. Of the population, 55% are estimated to be Sunni Muslims, 3% Shiites, 18% Orthodox Christians, 10% Catholics and just over 1% Protestants, but the numbers are approximate and in reality religious participation is very low.