In 2019, the population density in Armenia was 101 residents per km2, and 64 percent of the population lived in cities. The capital Yerevan is the dominant city, with more than a third of the country’s total population.

According to Countryaah, the Armenians early became known as successful traders and managed to gain control of business in many cities of the Ottoman Empire, which contributed to the hatred of Armenians who subsequently flared up in difficult pogroms.

The older settlements in the countryside consisted mainly of small villages, located in the river valleys and gathered in extensive clusters. The dwellings consisted of one-roomed huts, usually with dome roofs. In the mountainous areas, in many cases, the dwellings lay as small fortresses more or less hanging on the mountain slopes. Especially in the north there were also two-storey houses with the housing on the upper floor. Agriculture was largely carried out with the help of irrigation and terrace facilities. Livestock management (sheep and goats) meant herding livestock during the summer.

The traditional men’s suit was a cotton shirt, a kaftan and wide balloon trousers of the usual frontal oriental model. The women’s outfit was similar but of finer fabric and included an often very motley headdress. In the West, women’s costumes in particular during the Middle Ages were influenced by Western (Venetian) fashion. Older women enjoyed great respect and as widows could lead their extended family. Younger sons often have to take poorly paid jobs in the cities. The use of hashish was formerly commonplace.

Armenian folklore has been documented by extensive collection work by the Academy of Sciences in Yerevan; among other things, over 10,000 folk tales have been recorded. There are also anthologies in German and English. During the Soviet era, which meant, among other things, that the village system was replaced by colchos and sovoschos, the church’s strong influence over the culture decreased. However, the strong national awareness of the Armenians did not decrease. 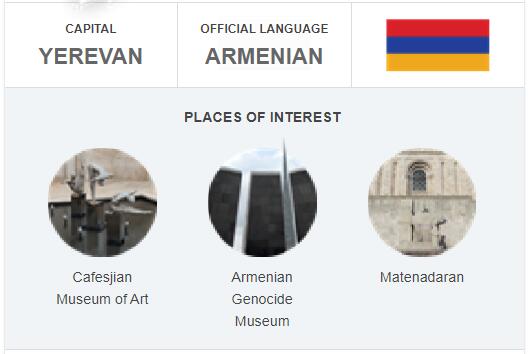 The official language is Armenian, which forms its own branch within the Indo-European language family. Other important languages are Kurdish and Russian.

The pre-Christian history of Armenia is poorly known in the absence of written sources. Single notes from the 400s AD reveals the Iranian origin of several deities, although over time they became distinctly Armenian in character.

Christianity became the official religion of Armenia in the early 300s and has been an important part of Armenian identity ever since. The Armenian Apostolic Church is an independent monophysite national church with richly developed liturgy and, like other Eastern churches (the Coptic and Syrian Orthodox), has not recognized the church meeting in Chalcedon 451. The head of the church bears the title of Katholikos and has its seat in Edmyzine, millennia the foremost Christian cultural town in Armenia.

Among the ethnic Russians, the Russian Orthodox Church is represented. The few ethnic Azeris who remain after the conflict with neighboring Azerbaijan form a minority of Sunni and Shia Muslims. The Kurdish minority is mainly Muslim, but there are also Yazidis among the Kurds.

Of the pagan period, prior to the 5th century. AD, few ancient epic or occasional songs remain, due to storytellers, mourners, and especially the singers of Gołthn (in Vaspurakan), sung to the sound of cymbals. From the century 5 ° we are witnessing the rapid development of a Christian musical civilization, in which a liturgy and a religious song are born, especially rich in original hymns or translated from Greek, which have arrived in the collection called Sharakan(Songbook or Necklace of gems). The style is simple and monodic, close to that of Greek-Latin Christianity, as well as the tonal system based on eight ecclesiastical modes, or tones, (4 authentic and 4 plagal); the notation (still not deciphered), was introduced in the century. 12 °. Among the most important centers of musical activity between the 5th and 13th centuries. worthy of mention are the monasteries of Tathew (9th century), Kamrǧatsor (10th century), Hałpat, Sanahin and Narek (11th-12th century), Arkhakałin in Cilicia (13th) etc. The ancient tradition is still cultivated today, especially in the centers of Ečmiadzin, Sevan and S. Lazzaro in Venice.

In the nineteenth century, in addition to purely monodic singing, polyphonic music began to be composed, published and performed, based on original or ancient songs, theoretical treatises, studies on Armenian folk song.