Bangladesh is one of the world’s most densely populated countries (1,094 residents per km2). The urbanization rate is low for South Asian conditions (37 percent).

According to Countryaah, the largest cities are Dhaka (7 million residents, 2012), Chittagong (2.6 million) and Khulna (663,000). It is estimated that the country has 85,000 villages. Especially densely populated are the river plains in the south.

The majority (98 percent) of the population is Bengali. They are predominantly Muslims, but a significant minority are Hindus. Although there are often both Muslims and Hindus in the same village, the cultural differences between the two groups are evident and expressed, except in the practice of religion itself, i.e. in the attire, in the way of health, in the choice of personal names and in food rules. In practice, marriage between Muslims and Hindus never occurs. Recently, Hindu Bengalis have agitated for their own state within Bangladesh. The majority of Muslims (88% according to the 2002 census) are Sunni, but there are also small groups and ahmaddiya (100,000). In addition, there is a small group of Shi’ites (3 percent), mainly Bihar, who immigrated from the Indian state of Bihar.

Only a fraction of the population is made up of dozens of tribes of Tibetan-Burmese origin, mostly living in the Chittagong Hill Tract’s hill region in the southeastern part of the country. They are mostly Buddhists and burners. The largest groups are chakma, marma and mro. Due to population pressure, the government has encouraged Bengalis to settle in the sparsely populated mountain areas, where many Chakma and other tribal people have been expelled from their villages. Thousands have been killed, and now there are tens of thousands of chakma in refugee camps in the Indian state of Tripura.

Bangladesh is severely affected by natural disasters, which is mainly due to the over-exploitation of resources. In flood-affected areas, the rural development lies on natural or artificial elevations, often along roads, making it difficult to distinguish bounded villages. In more upland terrain, the villages are more concentrated. 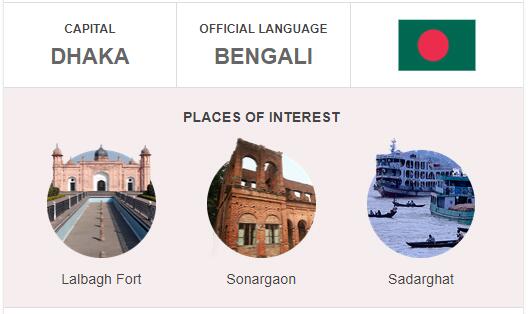 The majority of the population speak Indigenous languages and dialects, mainly the official language of Bengali (Bangla). Smaller groups speak Tibetan Burmese and Austro-Asian languages. Many well educated are bilingual with Bengali and English.

Bangladesh is a Muslim country with about 85% Muslims and 13% Hindus (compare above, Population and Ethnography); a small minority are theravada Buddhists. The Bengals are mainly Sunni Muslims in the Hanafite law school. Islam was fortified in Bengal in the 13th century, and during the moguls there were mass conversions of mainly Hindus and Buddhists to Islam from the 16th century. Arab merchants in the Chittagong area and Sufi missionaries also contributed to the conversions. Islam is part of the national character. After 1947, some 700,000 Muslims came from Indian territories.