The population density in Brazil is 24 residents per km2. Demographic trends have been the same as in other Latin America: high and slowly declining birth rates, relatively rapidly declining death rates, resulting in declining natural population growth. More than 85 percent of the population lives in cities. According to Countryaah, a large part of the population of big cities lives in slums (favelas). Immigration to Brazil ceased largely in the 1930s and was replaced by internal relocation, mainly from the poor and often drought-stricken northeastern to the rich southeastern and southern parts, but also to the Amazon region. The latter has been actively accelerated with the Transamazonian roads. In 2016, the largest cities were São Paulo (12 million residents), Rio de Janeiro (6.5 million) and Salvador (2.9 million).

Brazil’s indigenous indigenous population, which, before the European colonization of America, should have reached several millions, today constitutes a minority of only about 0.01 percent of the country’s population, which is thus wholly dominated by immigrants and descendants of various immigrant groups. Portuguese immigrated from the early 16th century and started introducing slaves from West Africa as early as 1538 to fill the need for labor in the sugar plantations. The hard work of the plantations meant that most slaves died after only a few years, and a total of 3-4 million African slaves were introduced until 1870. Slavery was abolished in 1888.

In the latter half of the 19th century, Portuguese immigration was supplemented by families from Germany and Eastern Europe. For over 10 years at the turn of the century, large-scale labor recruitment from Italy to the coffee plantations took place (the city and state of São Paulo are Italian-dominated). It was followed by immigration from Japan but also from Syria and Lebanon. The population mix is ​​extensive, and although the official statistics indicate that the population consists of about 55 percent white, 39 percent mixed, 5 percent black and 1 percent Asian, the vast majority of the population is actually mixed Portuguese and Native American (caboclo), of African, European and Native American origin. 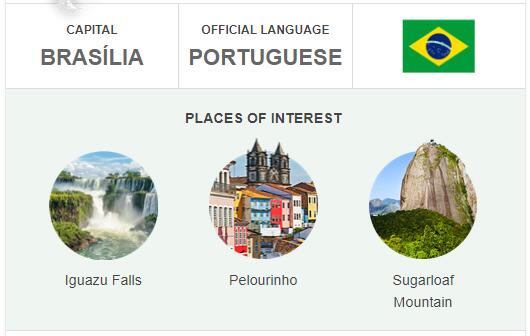 The official language and mother tongue of more than 99% of the population are Portuguese. Of the 180 still living indigenous languages ​​in the country, the majority belong to one of the four language families arawak, macro-ge, carib and tupí-guaraní.

The Portuguese church of the colonial era became co-responsible for the suffering of the indigenous people in the 16th century. As a countermeasure, until the expulsion of 1759, the Jesuits built collective villages, reducciones. Through the slave import to Brazil came African religions, which include belief in an ancestor god, cosmic unity, shamanism and totem culture. The colonial church legitimized the forced Christianization of slaves, economic and sexual exploitation. The Inquisition persecuted Jews, Muslims and political-religious groups. After independence in 1822, during the empire, but most after the establishment of the republic in 1889, a strong immigration of European Protestants occurred. During the 20th century several Messianic political movements emerged. Under the influence of the Latin American Episcopal Conferences (CELAM), a renewal process was initiated in the Catholic Church, with special emphasis on social work among the poor and marginalized.

From the 1950s, Archbishop Hélder Câmara and the educator Paulo Freire became pioneers of consciousness-raising (conscientização) and the struggle for human rights in favelas and society. The Catholic Church is polarized between a conservative hierarchy, affiliated with the rich and middle class oligarchy, and the broad liberation theological movement in approximately 100,000 Christian base churches. In these, the struggle of the poor for justice and human rights is ongoing. The base assemblies cooperate with the progressive part of the Brazilian bishopric CCBB and with liberation theologians, e.g. Cardinal Paulo Arns, Bishop Pedro Casadaliga, theologians Frei Betto, Leonardo Boff, Maria Clara Bingemer and Ivone Gebara. The CNBB Mission Council suppresses repression and murder by Native American people in the Amazon.

About 82% of Brazil’s population today are Catholics. Lutherans, Methodists, Presbyterians, Baptists and Pentecostals amount to 10%, while about 0.1% are Orthodox Christians. There are small groups of Muslims, Jews and Japanese Buddhists. Evangelical and charismatic movements from the United States are strongly moving forward. Ecumenical cooperation exists on social issues, human rights and education among poor and street children. Native American and African religious traditions, with roots in the religious heritage from, among others. West Sudan and Angola, practiced in temple cults (terreiros), i.e. umbanda, which about 20% of the population participates in. In the middle-class of the big cities, spiritualist traditions dominate, mainly cardecism. The interreligious dialogue is increasingly devoted to the connection between Christian faith and Afro-Indian religious traditions.

Brazil is a federal republic consisting of 26 states as well as a federal district, Distrito Federal, which forms its own administrative unit. The states have great autonomy and are led by directly elected governors and their own parliaments.