In 2019, Brunei had a population density of 74 residents per km2. About 3/4 live in coastal towns and villages, and the urban population is 78 percent. The rural population is concentrated mainly to the river valleys and to the coast. The forested hinterland is sparsely populated.

The majority of Brunei’s population belongs to indigenous peoples, bumiputera. The country’s constitution defines the Belait, Bisaya, Dusun, Kedayan, Murut and Tutong ethnic groups, which, in addition to Brunei (Barunai or Malay), are included in the bumiputera category. Overall, they make up 66 percent of the country’s population. About 11 percent are Chinese, which in turn are divided into several dialect groups (hockey, Cantonese, chinese, etc.). While bumiputans are largely Muslim, the Chinese are Buddhists.

According to Countryaah, Brunei also has many seasonal workers and immigrants, especially in the oil industry and the service sector, including from Thailand and the Philippines. The largest part of the population lives in the district of Brunei-Muara, where the capital is located. In the sparsely populated inland, there are a number of minorities, which together make up 6 percent of the total population. The most important groups include ibanas, kelabites and bajau. They base their finances on burning, hunting and gathering and have often maintained their traditional religion. There are also a few hundred individuals of the pen group, which feed on the collection of jungle products. 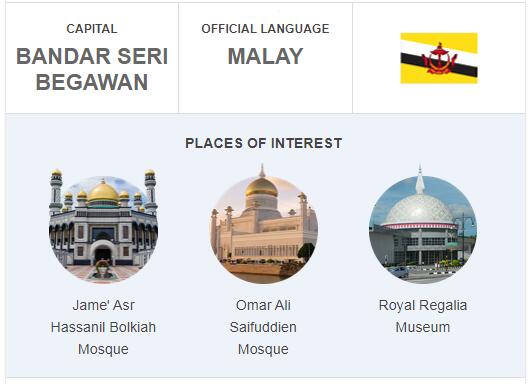 The official language is Malay, which in its local form is spoken by two thirds of the population. A small minority speak other Austronesian languages. Different Chinese varieties are spoken by about 10%. English is widely used. Culturally, Arabic is of great importance. See also Population and Ethnography above.

Islam (Sunni) is state religion. In religious matters, the Sultan is assisted by an Islamic council. The majority of the population, the Malays, belong to this state-carrying Sunni Islam. The Chinese population are Buddhists, Confucians or Daoists. The proportion of Christians amounts to about 10% (mainly Roman Catholics and Anglicans). In some areas of the interior, pre-Islamic tribal religions survive.