In 2019, Cambodia had an average population density of 90 residents per km2. The most densely populated areas are the lowlands around the Lower Mekong east of Phnom Penh and the area along Tonle Sap and on to the Thai border.

According to Countryaah, the population of the larger localities has fluctuated strongly since 1970. Phnom Penh then had around 2.5 million residents in the metropolitan area. Eight years later, only 20,000 lived there, as the Pol Pot regime had moved most of the city residents to the countryside. During the 1980s, cities were re-populated and trade resumed, and by the end of the 1990s, urban populations accounted for over 20 percent of Cambodia’s population. Phnom Penh then had almost 2 million residents. It is the country’s most dominant city with ten times larger population than the next, Bâtdâmbâng and Siem Reap in the northwest and Sihanoukville on the south coast.

The majority of the population (about 90 percent) belongs to the Khmer people, who during the Angkor period (802-1432) ruled Southeast Asia’s most powerful empire. Most Khmer are traditionally wet rice growers and keep pets (buffalo, pigs and chickens), but many also feed on vegetable cultivation, fishing and crafts.

The turbulent years that followed after 1975 led to genocide and population relocation which affected the demographic situation in Cambodia. Large crowds fled to Thailand and other countries.

Cambodia is also home to several minorities, some of whom have historical immigrant backgrounds. The minorities were persecuted during the Red Khmer 1975-79, and many were killed or expelled. Many Chinese, which until then were the largest minority in the country and were a prominent feature of the urban population through trade, had their lives destroyed during the difficult years of the 1970s and went into exile or were killed. During this time, the Chinese language and religious practices were forbidden. In 1984, there were only 61,400 Chinese left (compared to over 400,000 in the early 1970s). From the 1990s, the conditions for the Chinese have gradually improved; the language has been re-used, religious practices have to be observed and it is again possible to conduct business. In 2009, the Chinese were estimated to be 1 percent of the population.

Cham (300,000-500,000), who live in about 400 villages in the province of Kampong Cham, is a Muslim population minority originating in southern Vietnam, where some still live. Their language belongs to the Austronesian language family. Cham comes from the people who created the Champar Empire in southern and central Vietnam during the 600s and who later, like the Malays, took an active part in the long-distance trade between India and China. The majority of cham fled to Angkor (in present-day Cambodia) during the 1470s, since the Empire was conquered by the Vietnamese. After the flight, the cham restored relations with the Malays, and Islam became the dominant religion among them. Their interpretation of Islam is heterodox and contains many pre-Muslim elements.

Most chams live along the Mekong River north and east of Phnom Penh, where they mainly grow salmon crops (cotton, indigo, sesame and vegetables) and are engaged in fishing and river transport. Under the rule of the Red Khmer, many representatives of the Cham people were murdered; according to some estimates up to half of the population. In addition, many mosques were destroyed.

Along the border with Vietnam there are mountain tribes commonly called Khmer Loeu (‘mountain people’, in Western literature often referred to as Montagnards). They are estimated at a total of over 100,000 and feed on burning. As a rule, they have maintained their traditional tribal religions. Among the most important groups are jarai and rhad谷, who speak Austronesian languages, as well as the monkhmere-speaking paths in the southeast.

In the southwest, along the border with Thailand, there are small Monkhmic-speaking tribal pears, who are believed to be descendants of the area’s original Negrit population. In the north, along the border with Thailand, a large area is inhabited by the monkhum-speaking kui (15,500), who were formerly Swede farmers and lived in longhouses, but who nowadays predominantly feed on wetland cultivation and trade. Traditionally, kui had a special position in the Khmer kingdom; as manufacturers and suppliers of iron and silk to the king, they were exempt from tax. In the northeast is the tampon (25,000). Illegal logging, dam construction and land thefts threaten the people’s lives.

Despite preconditions for improving minority rights, including Through the introduction of bilingual administration in their areas, little has happened yet, and the UNHCR has repeatedly criticized the country’s failure in these respects. 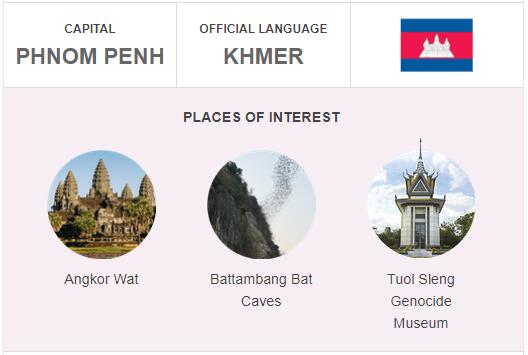 The official language is Khmer, which is spoken by almost 90% of the population. The Austronesian language cham has about 300,000 speakers. The number of Vietnamese and Chinese is uncertain. As a result of the country’s colonial past, French is the most widely used European language.

The religious situation can be documented from the period Funan (from about 100 century to 550). Then a non-sectarian Hinduism dominated, but there was also a, Sanskrit mediated, Buddhism. The development of religion was under continuous influence from India and Thailand.

During the period Zhenla (Chenla, 550-802), sectarian Hindu traditions emerged (Vishnuism and Shivaism), but Buddhism existed as an undercurrent that entered the day during the next period, the time of the Angkor kingdom (802-1431). Then Hindu sectarian traditions alternated with Buddhist, who had unambiguous features of Mahayana. During the conflict with Thailand that began in the 13th century, Hinayana Buddhism (in the form of theravada, traditionally Pali) spread from Thailand to Cambodia. After the defeat of Cambodia in 1432, theravada became increasingly dominant and was fortified at the court during the 17th century. Until 1975, Buddhism was state religion.

Hinduism and Buddhism have played a major role as ruler ideologies in Cambodia’s history. The rulers assumed roles such as Hindu avatars or Buddhist bodhisattas; Prince Sihanouk acted in the latter property as late as the 1960s. His goal was to make the Buddhist state religion a “Buddhist socialism” that would lead to a welfare state, led by a Buddhist ruler.

Under the rule of the Red Khmer in 1975-79, Buddhism (like other religions in the country) was suppressed, declared a reactionary and banned. Monasteries were destroyed and monks were forbidden to wear monk clothes, were forced to marry and do heavy work. It is estimated that over 60 percent of all monks were murdered during the period.

After Vietnam invaded Cambodia and defeated the Red Khmer, the new government under Heng Samrin allowed Buddhism to be restored, albeit in a strictly controlled form that suited the government’s purposes. The period 1981-88 allowed only those who were over 50 to become members of sangha.

From the mid-1980s, a liberalization and a gradual democratization of Cambodia began. This also meant a revitalization of Buddhism, which was reintroduced in 1989 as Cambodia’s state religion, through an addition to the constitution. Many of the monasteries and cult sites destroyed by the Red Khmer were restored. Two important monuments in the country are Angkor Vat and Angkor Thom.

Today (2012), it is estimated that just over 90 percent of the population are Theravada Buddhists and that they have just over 4,000 pagodas in the country. Being a Buddhist is an obvious part of the Khmer ethnic and cultural identity. Mahayana Buddhism is represented in the country with about 150,000 confessors and 63 temples.

Up to five percent of the population are Muslims. Most of these belong to the cham group, which mainly live in cities and in fishing villages. Almost all Muslims are Sunni and 90 percent belong to the Shafi’ite law school and just over 6 percent are Salafists, by the Han Balitic law school. There are also smaller groups of Ahmadiyya Muslims and supporters of the indigenous Muslim group Imam san. In the country there are more than 240 mosques and more than 300 surav mosques, which are small buildings that lack minbar. These mosques are mainly in the countryside and are used by all Muslims except those who profess to Imam san.

Around 100 Christian communities operate in the country. Most churches are Protestant and the Christian share of the population is estimated at about 2 percent.

In addition to Buddhists, Muslims and Christians, there are also small groups in the country who profess Bahai, Judaism, Hinduism, Confucianism, Chinese universalism and Cao đai. Furthermore, almost 5 percent of the population is estimated to practice indigenous traditional religion.

Today, religious freedom is guaranteed in the constitution, provided it does not interfere with public order. The government promotes Buddhist feasts, teaches Buddhism and promotes publishing of material around Buddhist traditions. Teaching in other religions is also allowed if it is run by private institutions.