Cameroon has an average population density of 53 residents per km2 , but the residents are unevenly distributed with the largest concentrations in the western and southern parts of central Cameroon as well as in the northern parts of the country. 56 percent of the population live in the country’s cities, of which Douala (2.8 million residents, 2015) and the capital Yaoundé (2.8 million) are the largest.

According to Countryaah, the population of Cameroon consists of nearly 280 ethnic groups, most of whom feed on hacking. In the north, livestock management plays a significant role. The approximate northern boundary of the actual Bantu population spread through southern Cameroon. Among the Bantu people are found fang (133,000) and bulu (900,000) in the far south, north of these bases (498,000) and yaunde (1.5 million) and further east duala (190,000). In the western highlands, the “grassland”, there are a large number of so-called semibantu people, which are divided into three main groups: bamileke (3.5 million), bamum(215,000) and bitches (44,000). These form the traditional chiefdom, and the chiefs still have a very strong position in the local communities. Among bamilke and bitches, indigenous African religions dominate, while bamum is Islamized to 80%.

Adamawa-speaking people include baya (288,000), east of the grassland, towards the border with the Central African Republic, and fali (90,000) and dowayo (36,000); the latter belong to the original groups in the area which by the name of their Muslim neighbors were called kirdi (‘Gentiles’). In the Mandara Mountains there are a large number of Chad-speaking people, among others. mafa (294,000), which also represents the indigenous population and has largely retained its traditional way of life and religion. In the far north, Muslim peoples, Fulani (1.7 million) and Arabic-speaking baqqara dominate(169,000), which until the country’s independence (1960) formed a series of politically and economically independent emirates. In the southeastern forest areas, different groups of pygmies live in scattered groups; bongo is estimated at 3,000; medzan pygmies live at the border with Nigeria and do not exceed 400. Along the border with Gabon and Equatorial Guinea there are gyelepygmies (4,000).

Due to conflicts in the neighborhood, the country also has a large number of refugee groups from neighboring countries. In 2009, they totaled 92,000. 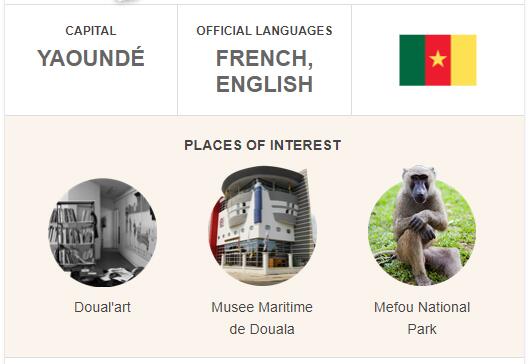 In Cameroon, 230–270 different native languages ​​are spoken, which are in the Niger-Congo or Chad languages. The largest are fulani (about 7% of the population) and ewondo (about 6%), which are also used as interpersonal languages ​​together with an English-based pidgin language. English and French are official languages. See also Population and Ethnography above.

In Cameroon, 57% of the population is estimated to be Christian. The Christian presence can be said to have begun in 1472, when the Portuguese explorer Fernão do Pó came to Cameroon’s coast. After him came traders who were primarily interested in transatlantic slave trade. However, the slave trade declined in the early 18th century and the influence of the Portuguese declined and was replaced by British and German. Instead of trading with slaves came trade with, among others. rubber and palm oil to dominate. In 1884, Germany began to colonize the area. In 1916, the country was divided between Britain and France, and the country became independent in 1961.

The British Alfred Saker founded a Baptist mission station in 1845 in what is today called Douala. The American Presbyterians opened a mission station in 1871, and in 1883 the Catholic Church was established, which today (2010) comprises about 26% of the population. Other Christians are divided into a large number of faith communities, including the Presbyterian Cameroon Evangelical Church, comprising 7% of the country’s population. The Christians are found especially in the southern and western regions. In the West, Protestants dominate in the two English-speaking regions, while Catholics are mainly in the French-speaking Western and Southern regions.

The Muslims, about 20% of the population, are mainly in the north, where Islam came with the Fulani people in the 18th century, and in the west among the bamoun people. Just over 20% are said to include domestic traditional religion.

The country’s constitution is secular. Together with other laws, it guarantees freedom of religion. However, religious groups must be registered and recognized to operate in the country. By law, it is forbidden for religious groups to operate without the recognition of the authorities. However, the law does not provide for penalties, which means that many unregistered small religious groups can operate freely. The practice of indigenous traditional religion does not require registration, as this is considered to be privately and locally associated with specific ethnic groups or tribes.

Several faith communities run schools, which must have the same standard when it comes to curricula, infrastructure and teacher competence as state schools. The faith community, as well as other private actors, receive financial support from the state for school activities. In the country there are several universities run by religious communities.

There are no laws that prevent religious communities from publishing religious literature or using other media to spread their messages. State media regularly broadcast both Christian and Islamic religious programs.