The islands were probably first populated during the 400s and 500s by Southeast Asian Malays, whose canoes had been carried across the Indian Ocean with the summer monsoon. During the 9th century, Arab merchants began to trade in the islands, and at the same time, people from the African mainland and Madagascar also immigrated. In the 16th century, the Comoros were conquered by Muslims of Persian descent, who established a series of small sultanates that still exist. The composition of today’s population reflects this history of immigration. More than 90 percent of residents profess Islam.

There is also a fairly large Comorian immigrant group in France and Madagascar. On the nearby island of Mayotte (Maoré), which is geographically belonging but politically outside the Comoros, parts of the population speak a Malagasy language, kibushi. 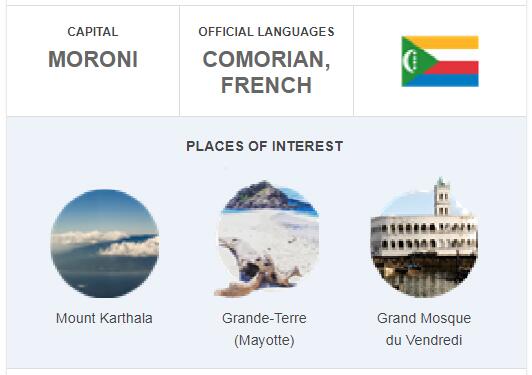 The majority of the population speak Shikomor (Comoro, Comorian), a Bantu language closely related to Swahili. It has been official language since 2001 along with Arabic and French.

Almost all residents of the Comoros are Muslims (Sunni). Islam came to the islands with Persian Muslims in the early 16th century. Islamic law is applied through Shafi’ite law school. Hundreds of mosques are found in the Comoros, and virtually all children attend the Koran school for two or three years. The largest Christian community is the Catholic Church, which has almost 2,000 members (2010). There are also more than 1,000 Protestants in the country, some hundreds belonging to independent churches and just over 600 Baha’is. Furthermore, it is estimated that just under one percent of the population practices indigenous traditional African religion.

Before independence from France in 1975, the state was secular. According to the Constitution of 2001, Islam is state religion. The Constitution and other laws guarantee freedom of religion. However, converting Comoros to a religion other than Islam is forbidden. The country’s great mufti is appointed by the president and is thus the member of the government who deals with matters concerning religion. He is also the one that the government advises on Islamic faith and the law of Islam. He regularly speaks to the people via radio about issues such as marriage, divorce and education. Non-Muslim organizations have the right to establish worship services, educate clergy, and gather for worship and worship. However, there is some social discrimination against non-Muslim believers, mainly at the local level.