It is estimated that the first people settled in Cyprus more than 3,000 years ago. Here, Hittites, Phoenicians, Greeks, Syrians, Persians, Egyptians, Romans, Arabs and Turks passed before the British Empire, which needed a base for expansion to the east, in 1878 negotiated an occupation agreement with Turkey. According to Countryaah, the Turks renounced Cyprus to the English in return for protection from the Russian czar.

The followers of Enosis – affiliated with Greece in the style of the union formation between Greece and Crete in 1913 – tracked progress in the early 1930s. The Orthodox Church, which represented the majority of the population, also encouraged such annexation, but the Turks, the traditional heirs of the Greeks, feared to see all its coastal areas surrounded by the hostile neighbor. The British sent several Greek-Cypriot priests into exile, but at the end of World War II, the island’s leading political figure was Archbishop Vaneziz Makarios, who led his Cypriot independence movement from his exile.

Representatives from Greece, Turkey, the Makarios Democratic Party and from the English Crown reached an agreement in 1959 on the establishment of the Republic of Cyprus, with guarantees for the island’s Turkish minority and with English sovereignty over the military bases. Independence was proclaimed on August 16, 1960 and Makarios was named president, which he utilized to support anti-colonialism and active participation in the Alliance Free States Association. He was re-elected in 1968 and 1973. Tensions between Greece and Turkey continued and were regularly reflected in Cyprus as conflicts between the island’s Greek and Turkish inhabitants. 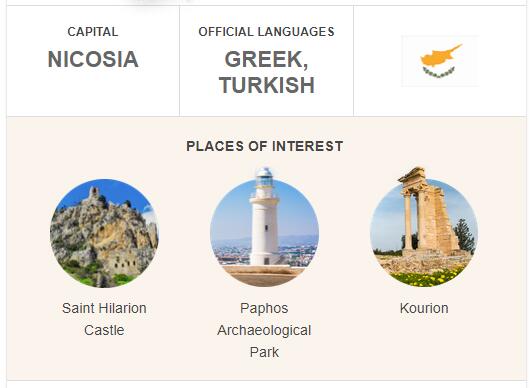 Nor was the North American government sympathetic to Makarios, who was considered to be “the Mediterranean Fidel Castro “. In 1963, right-wing extremists – supporters of Enosis – attempted to conduct a coup d’état. On July 15, 1974, the worst crisis was witnessed: under the direction of officers of the Greek army, the Cypriot National Guard dismissed Archbishop Makarios as president; however, he managed to escape to England. Subsequently, Nikos Sampson, who was in favor of joining Greece, was appointed head of state. Five days later, Turkey invaded the northern part of the island, carried out bombing of Nicosia and displaced 200,000 Greek Cypriots to the south, in order to protect the Turkish minority.

On July 23, Sampson handed the presidential post to the chairman of the Chamber of Deputies Glafkos Klerides. Faced with the prospect of a war against Turkey – which would add to the growing internal opposition and foreign condemnation – the colonel junta in Greece chose to resign on the same day.

However, the Turkish troops, which had occupied 40% of Cyprus, refused to return to pre-coup status and remained in the country. On August 16, 1974, the areas under Turkish control were declared to be the Turkish Cypriot Federal State with Rauf Denktash as its leader.

In December 1974, Makarios returned to Cyprus and reinstated as president; a post he occupied until his death in August 1977. A month later, he was followed by Spyros Kyprianou, who continued Makarios’ line and refused to recognize the division of Cyprus, just as he maintained the membership of the Association of Alliance Free States.

Denktash and Makarios agreed on four elements of the peace talks: (a) the creation of an independent federal republic, alliance-free and binational; (b) clarification of the areas to be managed by the two population groups; (c) clarification of details such as internal, free movement of property and other matters of principle within the framework of a federal system that recognized the League for both groups; the purpose was to preserve Cyprus as a unit.

But negotiations stalled as Turkey refused to comply with Greek Cypriot demands for the withdrawal of the Turkish army. On November 15, 1983, the Turkish Republic of Northern Cyprus was proclaimed and recognized only by Turkey.