In 2019, Congo had an average population density of 36 residents per km2. The largest is the density in the southern parts of central Congo and in the coastal region. The settlement pattern is characterized by a high proportion of rural residents (56 percent, 2019) in smaller villages. In 2010, the country’s largest cities were the capital Kinshasa (8.9 million residents), Lubumbashi (1.6 million) and Mbuji-Mayi (1.6 million).

According to Countryaah, Congo’s population is divided into more than 200 ethnic groups. The majority are Bantu people living in the central and southern parts of the country. Congo (which includes subgroups such as kunda, lala, ndembu, sakata, yaka and yanzar) makes up 34 percent of the population, while mongo (which includes mongo and kosai luba) makes up 15 percent and luba (including katanga luba and songe) 12 percent.

The demographic structure is complicated by a large number of internal refugees as a result of conflicts in the country. At the far north are Sudanese ethnic groups, including azande (1.5 million), mangbetu (1.3 million) and band. In addition, there are scattered pygmy groups (Mbuti, Efe and twa totaling 60 000) in the central and northeastern Congo’s rainforests, which have their own cultures and their own languages. The Pygmies, who have long been exposed as a group, have in recent years been subject to increased persecution.

Traditionally, the bantu population in the countryside lives by burning. The most important crops are cassava, sweet potatoes, jams, peanuts, beans and leafy vegetables, which are grown by the women with the help of short-cut chop. The men are responsible for perennial crops such as bananas and fruit trees. Agriculture is complemented by hunting and fishing, especially among the forest people north of the equator. The hunt for bushmeat (monkeys, antelopes) has increased in recent years and has given rise to international exports, which threatens the diversity of species in the country.

All bantu groups in Congo have kinship systems based on linear origin from mythical ancestors (for kinship terminology in the following, see descent). Most people south of the equator belong to the so-called matrilinear belt in Central Africa. The most well-known matrilineal peoples of the Congo are Congo, Lunda, Cuba, lele and pende. The forest people north of the equator (including Mongo, Nkundu, Ngala), like Luba in the south-east patrilineal genealogy, in some cases with car linear tendencies. The Sudanese peoples in the far north also have patrilineal genealogy, but their culture differs significantly from the Bantu-speaking forest peoples. While hunting and fishing play a prominent role in the latter, the former devote themselves exclusively to Sudanese savannah-type agriculture. The scattered pygmy groups have a bilateral family structure of the same type as the Northern Europeans. They live a semi-medicinal hunter and gatherer life in so-called bands of 20-30 people, while their bantam neighbors live in villages comprising 50-200 people.

The Bantu-speaking peoples of the Congo are known for a richly developed religious life, which besides the cult of the spirits of the deceased includes a variety of cults. Andean rituals are especially developed in the southern part of the country, where mask dances and the production of so-called fetishes in the form of, among other things, wooden figures form an important part of ritual life. Here, the plastic art has for centuries been richly developed also for purely decorative purposes. In the south, pre-colonial times have had sacred kingdoms and ranked clans, while the forest tribes in the north lack sacred chieftaincy systems and stratification of society. However, the Sudanese people of the north have princes and nobles who live isolated from ordinary people. Of the Congo’s old kingdom, only waste remains today, and local political leadership is based mainly on negotiations between family and clan heads. However, the rapid urbanization of recent decades, as in many other places in Africa, has radically changed traditional structures and cultural patterns. 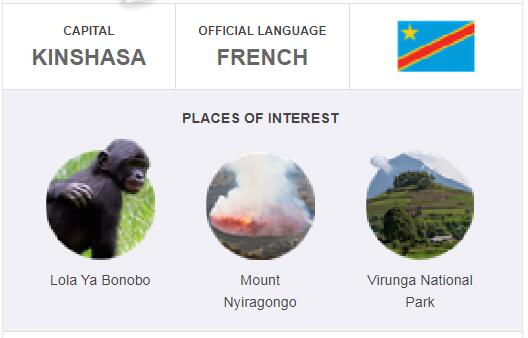 In Congo, more than 200 different languages ​​are spoken, most of which belong to the Niger-Congo languages, especially the Bantu languages ​​and the Adamawa-Ubangi languages, and a smaller group is Central or East Sudanese and Nilotic languages ​​within the Nilo-Saharan language family. Four Bantu languages ​​- Swahili, Lingala, Kikongo (Kituba) and Tshiluba – serve as interpersonal languages ​​and are defined in the Constitution as national. Due to the widespread multilingualism, meaningful speech numbers cannot be specified.

The former colonial language French is an official language, but the regional languages ​​are also used in elementary school education and in the media.

Christianity is the majority religion in Congo and is comprised of about 95 percent of the population. Among the Christians, the Catholic Church is the largest with about 55 percent of the population as members. Sporadic Catholic missionary activities began as early as the end of the 15th century, but the great breakthrough occurred during the modern colonial era of the 19th and 20th centuries. In the Protestant mission, efforts have been made by missionaries from, among others, the Swedish Missionary Union, the Swedish Baptist Society and the Pentecostal Movement. The largest Protestant religious community is the Kimbanguist Church (see Kimbanguism), which in 2010 was comprised of approximately 16 percent of the population. Among Christians, about 10 percent are believed to be affiliated with more than one religious community.

The proportion of Muslims is estimated at just under 1.5 percent and approximately 2.5 percent of the population are practitioners of indigenous traditional African religion. However, indigenous African religions have greatly influenced Christianity in Congo. More than 90 different faith communities have been identified in the country. These include Jehovah’s Witnesses, The Church of Jesus Christ of Latter-day Saints (Mormons), Orthodox Churches, Baptists, Pentecostal Churches, Methodists, and the open branch of the Plymouth Brethren.

The religious communities are scattered across the country, though with stronger representation in the cities than in the countryside. The Muslims are mainly found in the northeastern part of the country, in the province of Maniema and in Kinshasa.

A domestic religious with political ambitions, the Bundu dia Congo (BDK), which means ‘association with Lord Akongo’ has the strongest support in the province of Congo Central, where the number of members is stated to be several thousand. BDK fights for increased independence for Congo Central. It seeks a decentralized political and administrative system whose purpose is to give the Congolese increased power to decide for themselves over the future. BDK advocates a return to genuine African spiritual, cultural, moral and social values, a recapture of natural resources within the part of the country that BDK identifies as the Kingdom of the Congo and within which the Kingdom’s people are to be reunited.