With the exception of a period of high birth rates after the Second World War, natural population growth in Finland declined throughout the 20th century and is now down to 0.2 percent. According to Countryaah, migration to urban regions is continuing but at a somewhat slower pace than before. The sparsely populated sparsely populated areas in eastern and northern Finland are the fastest. The population is aging and in 2019, 22 percent of the population was 65 years or older.

Many began to apply to the cities to gain their livelihood from industry, even as emigration increased. In the first decades of the 20th century, more than 100,000 people moved to the United States and Canada. Some returned later, but there is still a certain concentration of fin kittens in some places in North America. However, the vast majority of the population was still rural and employed in agriculture.

After the Second World War, a new, substantial birth increase occurred as the population increased by 1.28 per cent in the years 1946–50 and 1.11 percent in the years 1951–55. Government action programs led to a sharp increase in the number of farms. At the same time, industrialization was gaining momentum, and industrial employment was approaching agriculture’s share.

In the early 1960s, there was a major structural change from agricultural to industrial society. While the first major post-war years were approaching working age, the agricultural sector was also modernized, which reduced the need for labor. A strong urbanization process was started, with the relocation movement mainly going to the metropolitan region and the southwestern parts of the country. However, the industry was unable to meet the entire employment requirement and a new wave of emigration increased in strength. This time emigration mainly went to Sweden and continued throughout the 1970s. By 1980, 445,000 people had moved to Sweden, while the relocation was about 200,000. As the labor market situation deteriorated in Sweden in the early 1980s and at the same time somewhat better in Finland, the relocation began to exceed emigration.

The urbanization process was also strongest during the 1960s and 1970s. An increase occurred again during the second half of the 1990s as a consequence of changes in business. Concentration to the economic center continues, but at a somewhat slower pace. Often, it is the crane municipalities around the larger cities that have a surplus of residents.

The average population density in Finland is 17 residents per km2, but the regional differences are large. The majority of the population is concentrated in the southern and southwestern parts of the country. In Northern Finland, the population density averages 5 residents per km 2, while in southern Finland it is between 30 and 40. Population density is greatest in the metropolitan area; This includes Helsinki (645,179 residents, 2018), Espoo (279,529) and Tampere (232,164). Other major cities are Vantaa (223,600 residents, 2018), Oulu (202,349) and Turku (189,982). Natural population growth has stagnated. In 2019 the nativity was 9 per thousand, after 1900 being 32.5 per thousand. The mortality rate fell from about 19 to 10 per thousand during the same period. Life expectancy increased sharply throughout the 20th century and is now 79 years for men and 84 years for women. The low birth rates make the population obsolete; the proportion of older people increases in relation to the working population. Increased demands are therefore placed on elderly care, while the labor force is decreasing in number. This is especially noticeable now that the large years of post-war years reach retirement age. Immigration has increased over the past ten years. 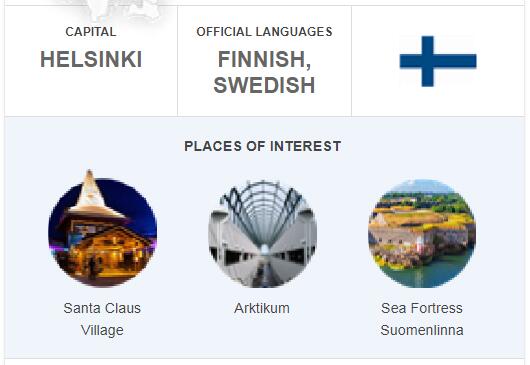 Finland is officially bilingual. The national languages are Finnish and Swedish (see Finnish-Swedish and Finnish-Swedish dialects). About 280,000 people (5.5%) state that they are Swedish-speaking. Through an international convention, the landscape of Åland is uniquely Swedish. Strong Swedish-speaking areas are also the Åboland archipelago, Uusimaa and Ostrobothnia.

According to the language conditions, the Finnish municipalities are divided into monolinguals (Finnish or Swedish) and bilinguals, where each language is spoken as a mother tongue by at least 8% or 3,000 people. The municipalities of Helsinki, Turku and Vaasa are to be considered bilingual as long as the minority exceeds 3,000 people. The classification is revised every ten years. Knowledge in both languages is required by officials in bilingual municipalities and in the state administration. Recently, voices have been raised against the rights of the Swedish language in Finnish society, and Swedish teaching at the school has been called pakkoruotsi ‘compulsory Swedish’.

Sami is the mother tongue of about 4,000 Finnish citizens. They have the constitutional right to use Sami in their contacts with the authorities. Other minority languages are Romani (about 3,000 speakers) and Tatar (about 1,000).

The traditional claim that Christianity was brought to Finland through Erik the Holy Crusade (c. 1155) can be highly doubted, regardless of the question of the historicity of the crusade itself. Archaeological finds show that the coastal population was previously reached by Christianity. Already from the 11th century there are examples of Christian burial, and signs indicate that individual churches were erected at the beginning of the 12th century. Some Christian basic words in Finnish (for cross, priest, Bible, etc.) can be derived from Russian and indicate an early mission from Novgorod.

The “Apostle of Finland” and patron saint are counted the English-born bishop Henrik (Saint Henry), who must have accompanied Erik’s crusade and killed in Finland shortly afterwards. Nousis, where his grave lay, became Finland’s first bishop’s seat. This was moved to Korois in 1229, where the oldest Turku was built (now in the district of Räntämäki in northeastern Turku), and from there about 1230 to the then newly created Turku. For a long time the ecclesiastical situation was uncertain; there was sparse between the churches, and sometimes there was a return to the old religion. In 1239, Birger Earl undertook a second crusade, against the Tavastians. The first Dominican Convention was founded in Turku at this time. A third crusade was made to Karelia in 1293 by Marshal Torgils Knutsson.

Church conditions were stabilized under Bishop Tomas (dead 1248) in Turku. A cathedral was established in 1280 and the new cathedral was inaugurated in 1300. The bishop of Turku was subordinated to the archbishop of Uppsala. In the 1300s, the church organization was further expanded, and the church’s finances were secured through tithing. The medieval Finnish church reached its peak under Bishop Magnus II Tavast (Bishop 1412–50). The country’s foremost monastery became the Littoral grace of Naantali, especially known by Jöns Andersson Budde and his Latin translations.

The reformation in Finland ran parallel to that in the western national half and depended on the decisions at Västerås Parliament in 1527 and the church meeting in Örebro in 1529. However, it gained a domestic touch and meant a boost for the Finnish language through Michael Agricola’s authorship and translations into Finnish, among others.. New Testament 1548. It was not until 1642 that the entire Bible was published in Finnish (see the section “Books and publishing” below). In 1554, the bishopric of Viborg, the second in Finland, was established, with Paul Juusten as the first holder. Johan  III ‘s plans for reunification with the Catholic Church were supported by the Archbishop Erik Sorolainen, but did not go through Uppsala meeting in 1593.

During the 1600s, the Swedish influence over the church was strengthened by significant bishops such as Isac Rothovius and Johannes Gezelius d. and dy, all in Turku. At the peace in Stolbova in 1617, Finland was expanded to the east. Viborg’s diocese now included eastern Karelia and Ingermanland, and then gained an Orthodox population, which in vain sought to be incorporated into the Lutheran church. At the peace in Nystad in 1721, Viborg county was resigned to Russia, and the bishop’s seat was then moved to Porvoo.

When Finland was separated from Sweden in 1809 and became the Russian Grand Principality, Alexander I assured that Finland would be allowed to retain its religion without restriction. The Finnish Church was given a more independent position than before, and in 1817 the bishop of Turku received the title of archbishop. Church legislation was still the Swedish law, and despite extensive preparatory work, the Finnish church did not have its own church team until 1869.

Already in the 18th century German pietism had gained influence in the bourgeoisie of cities, but it was through the peasant and preacher Paavo Ruotsalainen that the pietist revival gained its wide spread in the countryside during the first half of the 19th century. The center of Pietism became Lappo, which still gathers tens of thousands of visitors for annual summer meetings. The revival movement largely stopped within the church, and the free churches are numerically insignificant.

When Old Finland was reunited with Finland in 1812, the country again gained an Orthodox population. The Orthodox Church community was refined in the 19th century (including liturgy in Finnish); in 1892 the Orthodox diocese was founded with Viborg as the seat of an archbishop. When Finland became independent in 1919, the Orthodox Church community also declared itself independent and, in 1923, placed itself under the jurisdiction of Constantinople, under which it still stands, although it has long strived to become autocephalous. It was not until 1957 that the Patriarchate in Moscow recognized the new relationship.

When Finland became an independent republic in 1919, the Lutheran Church retained its legal position. In 1922, a religious freedom law was passed. A new classification was made in 1923-24; all predominantly Swedish-speaking congregations were united into a diocese with Porvoo as the diocese. The bishop there was moved to Tampere. The Swedish-speaking Turku Academy received the Faculty of Theology at the same time. During the interwar period, the Orthodox Church community gained a position as a second state church with two dioceses, Viborgs and Karelens (with Kuopio as the diocese). When Finland lost Viborg County after World War II, a large part of the Orthodox population moved west. Viborg’s diocese was replaced by the diocese of Helsinki. In 1979 the new Oulu Diocese was established and in 2004 Espoo diocese was founded by 25 parishes in the western part of the Diocese of Helsinki.

In 2012, the Finnish Evangelical Lutheran Church comprised approximately 78% of the population; it is divided into nine pins, of which the Archdiocese of Turku has the highest rank. The Orthodox Church community has about 60,000 members (just over 1% of the population). Other registered communities do not comprise more than a total of one percent of the population. The Pentecostal friends, who are not included in the statistics of the religious communities (they are organized according to the Law on Associations), are estimated at about 50,000 (2010). The Roman Catholic Church has about 12,000 members. Finland has a civil registry for those who do not want to belong to any society (about 20%). The number of Muslims is increasing; In 2010, they were estimated to be about 40,000.