Of the country’s residents, about 95 percent have native Greek as their mother tongue. Today’s Greeks are a people who have undergone considerable mixing for two millennia, not least with slaves in the early Middle Ages. However, they consider themselves primarily Greeks, and the country can be considered ethnically homogeneous. Some minor foreign groups exist. The largest of these is the Turkish in eastern Thrace and Rhodes. In Greece, there are also Macedonians, Albanians, Bulgarians and Romans. The population density is 81 residents per km2, but the distribution is very uneven. The most densely populated are the coastal landscapes (Attica, the Thessal plain and northern Peloponnese) and the Ionian Islands, the sparse of the central mountain landscapes. More than three-quarters of the population live in cities and close to one-third in the Athens-Piraeus area (3.9 million residents, 2010). Other cities include Thessaloniki (346,300 residents, 2010) and Patra (167,400).

According to Countryaah, Greece has for a long time been characterized by emigration, with a peak in the 1960s, but during the 00s the country had a positive net migration. Since 2010, economic and political development has led to an increase in emigration. At the same time, the country has welcomed a large number of asylum seekers from Asia and Africa. 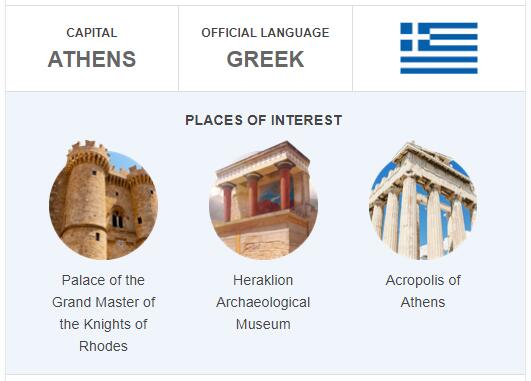 Official language since 1976 is the form of Neo-Greek called dimotiki; see Greek. The people of Greece have almost exclusively Greek as their mother tongue. The linguistic minorities that existed previously (Albanian, Slavic, Turkish) have largely been assimilated.

Greece is officially an Orthodox country with strong ties between church and state; about 98% of the population belongs to the Orthodox Church. The priests are paid by the state; the church, on the other hand, is obliged to pay taxes on its income. The largest minority are the Muslims (about 150,000).

Its strong national character gained the Orthodox Church during the Ottoman period, when it became the Greek people’s foremost identity factor and congregations and monasteries became centers of resistance to the Turks. The church still has stronger popular support in Greece than in most European countries. Daily life is largely characterized by ecclesiastical customs. Upon the liberation of Greece, the church was separated from the Constantinople Patriarchate and was given the position of autocephalic church under the leadership of a synod with the Archbishop of Athens, which is being primed. The church in Crete and many of the islands belong to the patriarchate but has the same relation to the Greek state as the church on the mainland.

For the history of the Greek Church from the 300s to 1453, see Byzantine Empire. On pre-Christian religion in Greece, see Greek religion.

Athens, gr. Athenai, the capital of Greece; approximately 3.8 million in the metropolitan area (2011). Athens is located on the Attic plain north of the port city of Piraeus and is surrounded by limestone mountains: Parnitha (1413 m) to the west and northwest, Penteli (1107 m) to the northeast and Imittos (1026 m) to the east and southeast. To the south, the town is open to the Saronic Gulf. It is flooded by two partially eroded rivers, Kifisos and Ilisos. Athens is the Balkan Peninsula’s largest city, and a third of Greece’s residents live here.

Athenians are very aware of their history, language and religion. The 400 years of Turkish occupation, constant Western European interference, the abuses of imported royal families and political leaders have created the basis for a widespread anti-state attitude and close family ties.

Despite the fact that many former illegal immigrants have been granted residence and work permits, there are still illegal immigrants working in the black labor market in and around the city. An African-Asian residential and business district has been shot in the city center of the Kerameikos area.

Since the beginning of the 1990’s, there has been a decline in the number of residents in the Athens center and city municipality, which in 2011 had approximately 664,000 inb.

Athens is the center of administration, trade, service, import and industry. The industry is characterized by small and medium-sized units, and although it began to move out of the 1970’s, a large part of the country’s industrial enterprises and employment remain in the metropolitan region. Formally, the employment structures are rigid, but in fact flexible. due to a significant black economy, low wages and illegal foreign labor.

The main productions are in the clothing, food and metal production areas. Many heavy industries from the 1960’s have remained in the western part of Elefsina and Aspropirgos, for example steelworks, oil refineries, shipyards and the paper and fertilizer industry. Industrial employment in Athens dropped significantly from the 1980’s as it rose nationwide. Public and private administration grew, especially after Greece’s accession to the EU and increased exports and trade with EU countries.

Much of the country’s GDP is produced in the metropolitan region, including parts of manufacturing production, service, incl. hotel and restaurants and the country’s financial services. Tourism is extensive.

Following Beirut’s collapse as a financial center in the 1980’s as a result of the civil war in Lebanon and the ensuing riots, several finance companies have moved to the city. Since the mid-1990’s, there has been considerable privatization of often large public companies in the city.

Athens has many higher education institutions, including several universities, the oldest of which was founded in 1837. Since the 1990’s, several educational reforms have increased the number of middle and regular labor market programs. There is a widespread private education sector.

The metropolitan area has for many years had an extensive but inadequate road network with only a few major ring and drop off roads. Up to the 2004 Athens Olympics, the EU and the Greek state funded a major modernization and expansion of the city’s infrastructure from new road systems and public transport to new information and communication systems.

Since the late 1990’s, new major ring and highways have been built around Athens.

Athens has a three-line electric metro system (commonly referred to as electric power) operated by the company STASY SA The metro originated around the original Piraeus-Athens railway line from 1869, which until the electrification in 1904 had steam locomotive driven trains. The first metro line has been expanded several times; at the end of 1957 to a 26 km long track between Piraeus and Kifisia in the north. Since the early 1990’s, two new lines have been built for the metro system (Attiko Metro). This is Athens’ largest construction project and archaeological excavation ever.

Athens’ railway station is divided into two sections, one for the narrow-gauge Peloponnese railway and one for the northern Larissa railway linking Athens with Thessaloniki and the rest of Europe. Athens Airport, Ellinikon, from 1938 10 km southeast of downtown, has long been too small for the growing tourist flow, so a new international airport, Eleftherios Venizelos, is opened (2001) 25 km east of the city with a capacity of 50 million. passengers per year. The old airport area was first converted into Olympic center and later into park.

The town’s drinking water comes from Lake Marathon and from the Mornos River at Delphi respectively. 50 km northwest and 120 km northwest of Athens. The sewage system is old and inadequate, and the treatment plants are small, which is why uncleaned wastewater is discharged directly into the bottom of the Saronic Gulf for a long period of time. A new large wastewater treatment plant was constructed in the 1990’s on the island of Psittalia off Piraeus.

Athens is supplied with electricity from natural gas and oil-fired power plants at Piraeus and Lavrio as well as from coal-fired plants at Kozani in Northern Greece. A large natural gas project with gas from Russia via pipeline through Bulgaria to Athens, as well as a gas terminal in Piraeus, will increase energy supply and reduce air pollution.

In the period 1970-90, the city’s car park quadrupled to 1.1 million. corresponding to almost half of the country’s cars, and in 1991-2001 the car fleet increased to 1.6 million, corresponding to 54 cars per year. 100 residents. Private car constitutes, despite new metro, new regional system, new environmentally friendly buses and new green pedestrian, 3/ 4 of the city’s total traffic, the daily congestion creates a lot of waiting.

At the center, traffic is closest; since the mid-1980’s, it has been limited; on even dates, only cars with even number plates may drive and vice versa. The rescheduling of business hours according to Western European patterns without dinner closure has also facilitated traffic. Air pollution is a serious problem for the capital and appears as a poisonous, yellowish cloud, “nefos”, trapped inside the surrounding mountains.