According to Countryaah, the Arawak people were the first residents of what today constitutes Guyana and they called the country the “Land with plenty of water”. Precisely because the climate was very humid and the coast characterized by mangroves, the population was poor. The Arawak people were displaced by the Caribbean, which dominated much of the region, and later became subservient to the islands of the Caribbean, giving them their name. 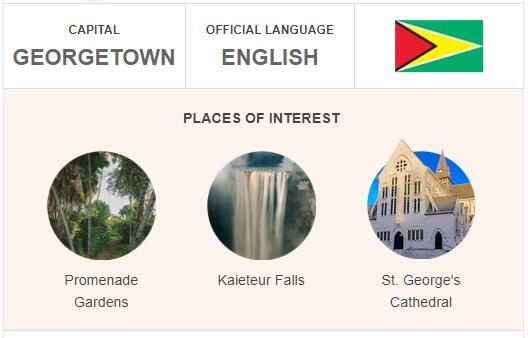 The Arawak people and Caribs were nomads organized into families of 15-20 members and lived off hunting and fishing. When the Europeans arrived in Guyana, the country had about. ½ million residents. Today, only 45,000 indigenous peoples remain divided into 9 ethnic groups, of which 7 have retained their identity and cultural traditions.

Encouraged by the myth of El Dorado, the Dutch in 1616 began to build the first fort in Guyana to consist of 3 colonies: Demerara, Berbice and Essequibo. In 1796, the Dutch colony was conquered by the English, who had already in the past initiated a massive import of African slaves. In 1763, the African Cuffy led a slave rebellion that was bloodied. Cuffy is today the nation’s national hero.

Slaves who escaped from the plantations fled into the rainforest, where they lived with the native population. This racial and cultural mix provided the backdrop for the concept of ‘rainforest carpenter’. In addition to these ethnic groups, the English introduced Chinese, Javanese and Indians as cheap labor.

The desire for independence in the second half of the 20th century led to the formation of the Popular Progressive Party (PPP), whose program embraced national independence, social improvement and, in the long run, a socialist transformation of society. The party’s chairman, Cheddi Jagan, was for 3 consecutive periods (1953, 57 and 61) the prime minister of the colony.

After several years of violent struggles for independence, on May 26, 1966, Britain recognized Guyana as an independent nation within the framework of the British state Commonwealth. But by then PPP had already been split. The Afro-Guyanese population had gathered in the Peoples National Congress (PNC), while the Indo-Guyanese population continued to follow Jagan’s PPP. PNC leader Forbes Burnham now took over the government backed by other ethnic minorities.

The split of PPP was not only due to ethnic contradictions. Foreign interests – especially North American ones – also came into play. The United States saw in Guyana’s independence and the PPP’s socialist orientation a threat to its hegemony in the Caribbean.

Although Burnham took over government power with the United States’ approval, his policy was not fully in line with that of the superpower. He advocated for freedom of alliance and proclaimed in 1970 the formation of the Cooperative Republic. Bauxite production, the timber industry and sugar were nationalized in the first half of the 1970’s. In 1976, the state already controlled 75% of the country’s production. At the same time, regional integration was promoted through the country’s incorporation into Caribbean cooperation CARICOM, Latin American cooperation organization SELA and the Caribbean merchant fleet. Thus, during the first decade of independence, Burnham and Jagan had in effect the same political platform.