Ever since biblical times in which the land was divided between the kingdoms of Gilead, Moab and Edom, Jordan has been associated with important historical events: in the ancient period, the kingdom of Petra was linked to the Roman Empire; In the 7th century, this was where the Arabs at Yarmuk began the battle against the Byzantine emperor Heracles; And during the Crusades, the western part of the country was the scene of the first part of the fighting against the Europeans.

When the Turks in the 16th century brought the area under their control, it became a part of Damascus district, and this status continued until the outbreak of the first world war. 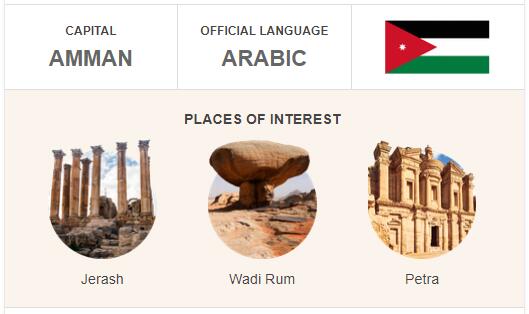 According to Countryaah, the Jordanian tribes took part in the extensive Arab uprising against the Turks. A rebellion that was crucial to the fall of the Ottoman Empire. With the Sykes-Picot treaty – a secret agreement reached in 1916 – France should have control over Lebanon and Syria, while England should have the mandate over Iraq and Palestine, which also includes the present Jordan. The English had promised the Sheikh Hussein of Mecca to create a unified Arab kingdom consisting of these areas and the Arabian Peninsula.

Sheikh’s son, Faisal, was thrown out of Syria by the French (see Syria) in 1920. As a result, Prince Abdullah – another of Hussein’s sons – organized the Jordanian Bedouins in support of his brother, but the English managed to convince him, that it was better for him to accept the government power over the emirate of Transjordan.

The Emirate of Transjordan continued as a British mandate until 1928, when the border with Palestine was established and a law was passed giving Abdullah and his heirs the power to legislate and administer the state. However, foreign policy and control over the military remained in British hands until May 1946, when the emirate was transformed into “Transjordanian Hashimite Kingdom.” After the Arab-Israeli War of 1948, King Abdullah annexed the Palestinian territory on the left bank of the Jordan River. Following the annexation, the country was renamed Jordan, but at the same time, it created a number of new problems: the many Palestinian refugees, the legal status of Jerusalem and the fact that its border with Israel almost doubled.

In 1951, Abdullah was murdered and followed by his son Talal on the throne. He had strong anti-British attitudes and promised implementation of progressive reforms, but the following year he was ousted. In 1953, his son Hussein took the throne. He was just 17 years old. He was able to stay in power because of US support as well as personal affection from the Bedouins. This was essential to maintain control of the army.

For 40 years, and especially after the Israeli occupation of the West Bank of the Jordan River, the kingdom has received a very large number of Palestinian refugees. They were initially displaced by the Israelis from their lands and villages in 1948 and later displaced from the West Bank in 1967. The lopsided demographic distribution where Palestinians today make up two-thirds of Jordan’s population and Hussein’s desire to displace the PLO as the Palestinians’ most important spokesman was the backdrop for the 1970 massacre of Palestinians in Jordan – known as “Black September.”

After the Arab-Israeli war in 1973, the king established diplomatic relations with the PLO, but it was not until 1979 that he recognized the organization as the only legitimate representative of the Palestinians.

In 1984, Jordan declared that it would not unilaterally negotiate with Israel, but at the same time it approached Egypt. In 1985, Hussein and Yasser Arafat reconciled and published a joint peace initiative for the Middle East, which did not materialize due to Israel’s dismissive stance.

In July 1988, King Hussein waived any claim to the West Bank, transferring the PLO responsibility for these Israeli-occupied territories.