In 2019 Kenya had an average population density of 89 residents per km2. However, due to ecological conditions and the availability of arable land, the population is unevenly distributed; about 75 percent live on 10 percent of the country’s area. About half of the population is found in southwestern Kenya, in the area around Lake Victoria and in the eastern, central and western highlands.

According to Countryaah, Kenya’s indigenous population consists of more than 60 ethnic groups, which are usually categorized according to language: Bantu-speaking, Nilotic-speaking and Cushitic-speaking groups.

In the arid and semi-arid areas of the northeast, mainly Kushite-speaking people live. Several of these – for example Somalis (2.3 million) and Oromo (164,000) – are livestock keepers and fully or partially nomadic. In the more fertile central parts of the country live diet-speaking, mainly agricultural groups, such as kikuyu (6.7 million), kamba (4 million) and meru (1.7 million).

The groups that speak Nilo-Saharan languages ​​are found in the western parts of the country. Among these are the livestock massages (840,000) in the southwest and Turkana (1 million) in the northwest. The Nilotic peoples also include the agricultural Luo (4 million, the country’s second largest population group), the so-called Kalenjin group (over 4 million) and Pokot (370,000), who live on the slopes around Mount Elgon and carry on both livestock management and agriculture. There are some small enclaves of hunter and gatherer people, including okiekwhich disintegrates in the sogoo in the Mauskogen in western Kenya as well as the Chinese around the village of Kinare in Kenya. Only a few still speak their own languages. At the mouth of the Tana River lives the dahalo (400), who until recently lived as hunters. In the Ija district in the northwestern parts of the country is another hunter group called awaar or boni (3,500). In northern Kenya there is another hunter and gatherer group, waata (2,000). They used to be elephant hunters, but now work at oromonomads.

Despite the diversity of ethnic groups, ethnic conflicts have in the real sense until recently been rare. The national languages ​​Swahili and English have sought to establish a national Kenyan culture. 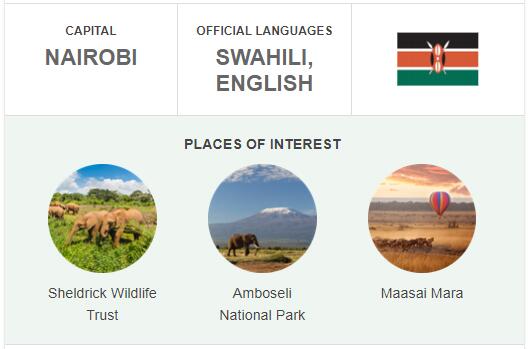 In Kenya, some 55 native languages ​​are spoken, which can be divided into three groups representing three of the four major language families in Africa. The first consists of twenty-five bantu languages ​​(zones E, G and J) in the Niger-Congo languages. The largest of these are kikuyu (17% of the population), luhya (14%) and kamba (10%). The second group consists of fifteen Nilotic languages, representing the Nilo-Saharan language family, the largest of which are Kalenjin (13%) and Luo (10%). The third includes fifteen Cushitic languages ​​within the Afro-Asian language family. The largest among these are Somali (6%).

Swahili is the dominant interpersonal language, while English is the administrative language. See also Population and Ethnography above.

Christianity was established early in Kenya and today comprises about 80% of the population. Of these, just over half are Protestants (including members of the Anglican Church of Kenya) and the rest are Catholics. In 2010, there were over one hundred different religious communities. Among these, the Pentecostal movement is one of the most successful. It is estimated that around 15% of Kenya’s population participates in various Pentecostal congregations. Nairobi is the administrative center for several international Christian organizations, e.g. the All Africa Conference of Churches important to ecumenical work.

It is unclear when Islam reached Kenya. Zanzibar in present-day Tanzania has a Kufish inscription that tells of the construction of a mosque 1107, which confirms that there was a significant Muslim settlement. Estimates of the proportion of Muslims in Kenya vary, but they are expected to amount to about a tenth of the population. Most live in coastal areas and on the border with Somalia.

Adherents of native traditional religion amount to about 9%. The proportion of Hindus, Sikhs and Baha’is is less than 1%.

Kenya’s constitution is secular and together with other laws religious freedom is guaranteed. In the country there are qadi courts (cf. qadi), which decides on inheritance and other family matters for Muslims. These courts existed before the colonization of East Africa, but in 2010, their legitimacy was challenged by members of the Supreme Court, who said these courts were discriminatory, including. because they were funded with state funds. In the new constitution of 2010, qadid courts are subordinate to judicial bodies such as the Supreme Court and the Court of Appeal.

Both Christian and Muslim groups are allowed to broadcast radio and television programs. Registered religious communities have the right to apply for tax exemption. Marriage between members from different Christian communities is unproblematic. Conversely, Christians who want to marry Muslims are expected to convert to Islam. Many Muslims feel that they are discriminated against in a society dominated by Christians, e.g. by deliberately hindering the development of state and corporations in Muslim-dominated areas, and counterterrorism laws have led to Muslims being harassed.