According to Countryaah, Laos is the country in Southeast Asia that has the lowest population density; In 2019, it averaged 30 residents per km2. The most densely populated is the Mekong Valley along the border with Thailand, while especially the mountain regions in the north and east are sparsely populated.

As a result of the relocation of Laotian refugees from Thailand, the population increase exceeded 3 percent per year during the 1990s. International relocations now have little significance.

Laos has low urbanization, and about 65 percent of residents still live in the countryside. The only major city is Vientiane, which in 2015 had 620,200 residents.

Lao’s population is composed of some 40 ethnic groups, many of which, however, amount to only a few thousand individuals. Mon-Khmer-speaking tribal people represent the original population. In the country’s northern and central parts, these include scallops, which are the largest group, as well as the lamb in the northwest. Farther south there is sow and furthest south lives, among other things. the law, bridge and cow. The Monkhmer people make up about 25 percent of the population. They feed predominantly on sweat farming with mountain rice as a base crop and supplement the catch with river fishing, hunting and gathering. Their traditional religion is animistic, and shamans and spiritual priests are of great importance to the religious and political life of the villages.

The majority of Lao’s population (69 percent) is made up of Thai-speaking people, who from the 12th century immigrated from Yunnan in southern China. Due to superior political and military organization, they succeeded in establishing themselves as rulers in most parts of the country. The derogatory term kha (‘slaves’), sometimes still used by the monk people, derives from the conquest of the Tao people. The majority of the Tao people belong to the Lao ethnic group, which is the majority in northeastern Thailand as well. Lao already formed in the 1300s a kingdom around Luang Prabang, which remained the royal capital of Laos until the revolution in 1975. The dominance of the Lao people was reinforced by the fact that during the colonial period the French mainly employed Lao as officials in all parts of Laos. Other taiga groups aretai dam (‘black tai’), tai khao (‘white tai’) and tai l邦 in the north, phuan, which until the 19th century formed a state on the Xiangkhoang plateau, and phuthai in the south. The Thai people in principle feed on wetland cultivation in the lowland areas, but many still receive their support from the use of sweat. They are mostly Theravada Buddhists, but local spirit cult plays a significant role alongside the temple in the villages.

During the 19th century, additional people immigrated from the north. It was first and foremost the tribal people, hmong, found in the mountains in the northern parts of the country and whose number is estimated to be around 450,000. They feed on sweden farming with mountain rice and maize as base crops, and their preference for cultivating opium as a sales crop in the so-called golden the triangle has reinforced the contradictions between them and the Lao-dominated government. Other late immigrant peoples in the northern parts of the country include the Tibetan-Burmese tribes akha and lahu as well as the original Tibetan-Burmese phunoi. Their number is less than 50,000.

The political and cultural dominance of the Tai/Lao people is also evident from the official ethnic nomenclature, according to which the Lao population is divided into three major groups: Lao Lum, which is the lowland population, that is, predominantly Lao, and which is considered to be dependent solely on wetland cultivation, Lao Theung., which inhabit the mountain slopes and which mainly comprise kammu, and lao sung, the highland peoples, ie. hmong and the Tibetan Burmese people. The two latter groups, which are predominantly sweden farmers, are officially considered to be responsible for most of the forest destruction in the country. In fact, wastewater treatment is also practiced to a considerable extent by lao lum, and state forestry companies account for a significant part of the logging. 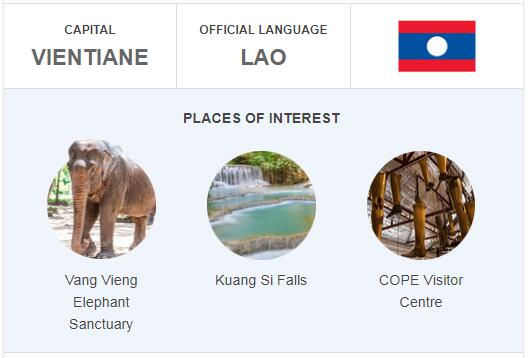 The main language Lao (Lao) is spoken by over 3 million or about half of the residents. It belongs to the Thai languages, as well as several minority languages, including those with Lao closely related to white tai, black tai and red tai, phuthai and l邦 (a total of about 1 million speakers). Lao is a language of instruction in schools and is largely identical to northeastern Thai, which is spoken in the northeastern part of Thailand but is officially regarded as a dialect of Thai.

Buddhism can be traced back to the 1300s, when Laos was united by King Fa Ngum. He received a number of monks who brought palite texts and a Buddha statue from Sri Lanka; The statue was called Pra-Bang and also came to name the Lao royal capital, Luang Prabang. This variant of Buddhism is primarily covered by the Lao ethnic group, which for the most part lives in the lower-lying regions of the country. Lao makes up 40-50 percent of the population. The rest consists of almost 50 different ethnic groups. The practice of religion in these groups is permeated by religious beliefs and other animistic elements. The domestic prohibitionist belief in spirits, phi, is inextricably linked to Buddhism.

The Christian presence amounts to just under three percent. The largest among these is the Lao Evangelical Church (LEC), which mainly consists of various variants of Methodism, which joined together in 1956. LEC goes back to, among other things, the Swedish and Swiss mission that began around the turn of the century 1900. LEC has over 400 parishes in the country and has state-recognized properties in Vientiane, Savannakhet and Pakse. However, the oldest of the Christian churches in the country is Lao’s Catholic Church. Catholicism came to the country in 1630 and today it is estimated that almost 5,000 Laotians are Catholics. Most of these are ethnic Vietnamese, who mainly live in the big cities along the Mekong River in the central and southern parts of the country. There are also small groups in the land belonging to Jehovah’s Witnesses, the Church of Jesus Christ of Latter-day Saints (Mormons), various Pentecostal traditions, Chinese folk religion, Confucianism, Taoism, Hinduism, Bahai and Seventh-day Adventists. There are also a smaller number of Muslims in the country.

Until the communist takeover of the state power in 1975, Laos was a kingdom with Buddhism as a state religion. According to the current Constitution, which is from 2003, all citizens of the country have full religious freedom. However, the Constitution prohibits activities that can create contradictions between different religions or contribute to class differences between them. This is often interpreted by the Lao authorities as giving them the right to restrict some religious practice among Buddhists, “animists” and others. It is also used to limit Protestant evangelism among minority groups.

A decree from the President (No. 92) allows proselytism (conversion), but this must not be done by foreign missionaries or evangelists; only Laotians may try to find new members among their countrymen. The decree also requires permits, which are complicated to obtain, for printing and publishing religious material, owning and building worship services, and having contact with foreign religious groups. The permits are administered by the Lao Front for National Construction (LFNC), which is responsible for matters relating to religion. In some cases, for example for the construction of new Buddhist temples, the Prime Minister’s approval is required. There is no information on religious affiliation on identity cards, passports or in the population register.

Four religions are recognized by the government of Laos: Buddhism, Christianity, Islam and Bahai, which has about 8,500 members. After the communist takeover of 1975, Buddhism was persecuted, but today it is the exception to many of the restrictions in Decree 92. The state sponsors Buddhist activities and uses Buddhist rites and ceremonies in official contexts. Buddhism is seen as an important element of the country’s cultural and spiritual identity and in the public schools, teaching Buddhism is promoted. Especially in the countryside, many boys get their education in Buddhist temples. In the country there are two Buddhist colleges and two colleges that offer both young and adult Buddhism teaching.

The recognized Christian confessions are the Catholic Church, the LEC and the Seventh-day Adventists. The LFNC requires that all other Christian organizations must be registered. In order not to be disconcerted, all Protestant groups must join either the LEC or the Seventh-day Adventists. The Christian communities run Sunday schools for children and young people, though without the support of the state but with financial assistance from other countries. However, it happens that local government administrators are denying Protestant communities to teach with reference to Decree 92. The Catholic Church has a seminary in Thakhek. Here, students with upper secondary education can pursue studies in philosophy and theology for up to 10 years. Muslim children are also offered religious education to a limited extent.

The Laotian New Year is a national holiday celebrated with Buddhist elements.