According to Countryaah, the Latvian population is declining through birth deficits and extensive emigration. According to official statistics, the number of residents decreased from close to 2.7 million in 1989 to 2.1 million in 2011. In 2019, the number of residents was estimated to be 1.9 million. This means that the population has decreased by more than 400,000 people, or just over 15 percent since 2000. Emigration intensified in connection with the financial crisis of 2009–10, and then mainly went to the UK and Ireland.

Migration from the east was extensive during the Soviet era, especially during the 1940s and 1950s. At the same time, the Second World War and the Soviet annexation led to a large wave of refugees to the west, which is why many letters today are found outside the country’s borders. After independence was restored in 1992, both of these population streams changed direction. This has affected the composition of the population, and in 2011, the Latvian population was estimated to be 59.5 percent. This compares with 52 percent in the 1989 census. Among other ethnic groups are Russians (27.4 percent), Belarusians (3.5 percent), Ukrainians (2.4 percent), Poles (2.3 percent) and Lithuanians (1, 3 percent). The majority of the Latvian population live in the countryside. The Slavic population is predominantly found in the larger cities. In Riga, the Latvian minority, 42, 5 percent of the population (2011), and in Daugavpils they make up only 18 percent of the population. Even in Rēzekne, the Latvians are in the minority. The countryside and smaller towns in the eastern parts of Latvia also have a relatively large element of Slavic speaking. The Polish minority is concentrated in Daugavpils and its environs. 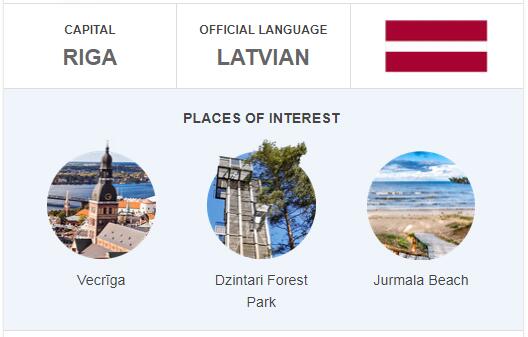 The state language in Latvia is Latvian. About 1.34 million people in Latvia and about 200,000 outside Latvia have Latvian as their mother tongue.

When Latvia became independent in 1918, Latvian was adopted as the official state language. A number of minorities, who cared for their language and culture, were living in Latvia during this time; the largest minority groups were Germans, Russians, Jews, Poles and Romans.

After World War II, Latvia was occupied by the Soviet Union, and Russian became the official language. Soviet language policy was based on the idea of ​​an international language (Russian), and it was necessary for all residents of the Soviet Union to master it since all administrative activities took place in Russian. However, the individual republics had to retain their language, but as a local language. After independence in 1991, over half of Latvia’s residents were Russian-speaking. Latvia’s urban residents are mostly bilingual in Latvian and Russian, with English as a European lingua franca. In 2012, a referendum was held on making Russian official language and Latvian. However, 75% of the voters were against the proposal.

According to the 1995 Language Act, livi has a special position in language preservation. Interest in minority languages and dialects has been renewed after independence. In Latgale, in the southeastern part of Latvia, there are e.g. a movement to introduce Latgalian as a regional language.

Letters together with Lithuanians and ancient Prussians during the pre-Christian period constituted a linguistic and cultural unit. An image of their religion gives the rich folklore, especially folk poetry (dainas), and the image is complemented by archaeological excavations. Humans lived in a world where the creator gods were active and involved in the daily lives of humans (see ancient Baltic religion).

Although the first Christian currents came from the east, Christianity was the equivalent of today’s Latvia through German mission during the second half of the 12th century and the 13th century. The Reformation reached Riga as early as 1521, and it spread mainly to other cities. During the second half of the 16th century, most of Latvia came under the rule of Roman Catholic Poland and under the influence of the Counter-Reformation. Only at the beginning of the 1600s, with the Swedes’ entry into Livland and Kurland, were the confessional boundaries drawn largely still (1993): Livland and Kurland became Lutheran provinces, and Lettgallen remained part of the Roman Catholic Kingdom of Poland. Up until the First World War, the Lively and Kurlian churches had their own administrative system and traditions.

During the 18th century, men’s hutism was successful in Livland. In the middle of the 19th century, many Latvian peasants converted to the Orthodox Church in the hope of better material conditions. The Lutheran churches in Livland and in Kurland were first united in 1921. After World War II, all confessions were subjected to severe Marxist-political pressure. The influence of the Roman Catholic Church and the Free Church movements has increased. The revival of the Latvian Lutheran Church began with the founding of the Atdzimšana un atjaunotne movement (‘Rebirth and Renewal’) on June 14, 1988.