Lesotho, a country in southern Africa, is predominantly a highland that rises to 3 482 m above sea level in the east. Lesotho is one of the poorest countries in the world. The residents, who almost exclusively belong to the Bantu people of the Sotho, live mainly from the cultivation of grain, which, however, is not sufficient for self-sufficiency. The keeping of sheep and angora goats is important for the export of wool (mohair wool). Lesotho was a British protected area as Basutoland from 1868 and gained independence as a kingdom within the Commonwealth in 1966.

According to Countryaah, Lesotho’s population is homogeneous. Almost all Lesothians are Southern Sotho (98 percent), a subgroup of Sotho, and call themselves Basotho. The rest consists of Zulu, Xhosa and whites of South African descent. There are also some minor minorities of nguni origin, integrated with basotho. Basotho is also found in the Free State Province of South Africa, where their numbers are significantly greater than in Lesotho.

In the past, patrilinear and patrilocal large families with large herds of livestock and common agriculture formed the community base in Lesotho. Migrant work in South Africa and monetary economics has meant that the individual household has now become the basic social and economic unit, although the extended family still has economic, social and ritual significance. Similarly, livestock is still important even in other contexts than economic ones.

A large part of Lesotho’s men of productive age are migrant workers in South African mines. Home and agriculture are mainly run by women. The dependence on the miners’ wages is so great that one can regard Lesotho as a mining industrial country without its own mines and the majority of its population as a rural proletariat. All land in Lesotho belongs to the nation and cannot be owned privately. The traditional chief hierarchy, in whose top the king is found, still has administrative and judicial functions. Each village has a chieftain whose task is to allocate farming rights to the village’s agricultural land. 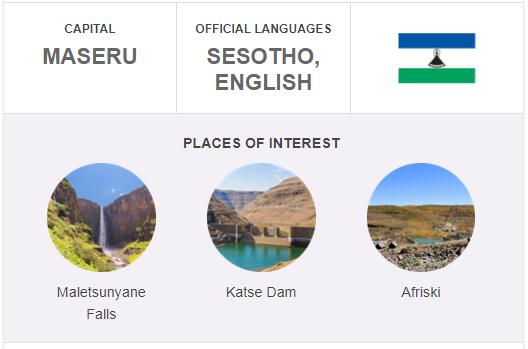 The Bantu language Sotho (Sesotho, Southern Sotho) is spoken by about 85% of the population; about 15% speak Zulu (also a bantu language). Sotho is the official language along with English. Compare Population above.

The Constitution and other laws guarantee freedom of religion. New religious minority groups are easily integrated into society, as the country’s constitution is secular, something that the government is guarding. The Christian churches have a great responsibility for school education. The Catholic Church operates an estimated 40% of all the country’s primary schools. Other communities that have schools are the Evangelical Church, the Anglican Church and the Methodist Church. Lesotho’s Christian Council played an important role as mediator between various political parties in conflicts over the distribution of seats in the National Assembly after the 2007 elections.