According to Countryaah, the country has a high degree of urbanization; In 2019, 80 percent of the population was estimated to live in cities, of which the capital Tripoli (Tarabulus al-Gharb) is by far the largest, with 1.1 million residents (2010).

Over 90 percent of Libya’s population are Arabs and Arabs, and 4 percent are Berber. The largest Berber group is nafusi (150,000). In the western border areas are nomadic Ajertu Rule (10,000, of which 2,000 reside in the oasis city of Ghat). In the south there are small groups of teda.

The last Jews left the country after the Six Day War in 1967, while the enclaves of Italians and Greeks largely fled after 1980. However, small groups of descendants of Italians and Greeks still exist in the country. Up to 1995, there were several million guest workers in Libya, mainly Arabs but also Turks and Koreans, but after deportations they have decreased in number. There are still large contingents of guest workers; a growing group is Filipinos. The country also houses large numbers of illegal immigrants, mainly from Africa; in recent years, these have repeatedly been subjected to violence and compulsory reprimands. In addition, there are small contingents of Palestinian (8,900), Somali and Iraqi refugees.

Historically, Libya has consisted of three independent regions: Tripolitania in the west, with strong ties to the rest of the Maghreb, Cyrenaika in the east, which had been facing Egypt, and the Fezzan oasis complex in the south. These culturally and politically distinct areas began to integrate in the mid-1930s, when Italy fought the last resistance of the Sufic Sanusiya order and the tribes of Cyrenaika that this fraternity mobilized. The social effects of the large oil revenues from the 1960s have greatly contributed to the fact that the residents of the three regions have come to perceive themselves as Libyans. However, tribal membership is still important for personal identity. 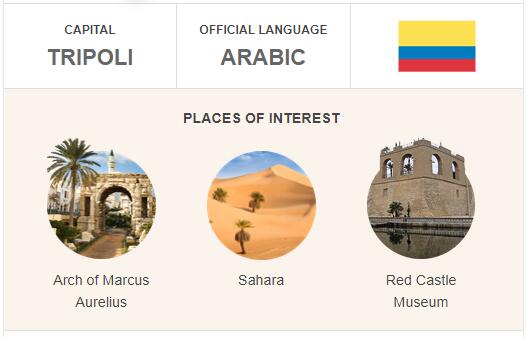 Islam is state religion, but the constitution guarantees religious freedom. Almost all Libyans are Sunni Muslims of Malik and, to a certain extent, Hanafite legal tradition. Many berbers are ibadites (compare kharijites). Politically, Islam plays a big role. Under Turkish rule and during the Italian occupation, the Sanusiya words (a Puritan and Sufi-inspired revival movement) formed the core of the resistance to the foreign power holders.

At independence in 1951, its head, Idris, was made king of Libya. His successor Muammar al-Khadaffi saw himself as a reformer and rejected the traditional Islamic law schools. al-Khadaffi represented something that can almost be regarded as a form of Islamic socialism, which has generally not been accepted by the religious scholars (ulama). During the 1970s, reforms in the name of Islam were passed through which lost their independence and financial base. In the 1980s and 1990s, the Islamist opposition to the regime became clearer and more militant. The regime responded with arrests and executions of supporters of i.e. Muslim Brotherhood.

In February 2011, violent protests erupted against al-Khadaffi in Benghazi, eastern Libya, and protests spread rapidly across the country (see further History, Civil War 2011). al-Khadaffi was killed in September 2011. In the elections to the Provisional Parliament, the Liberal National Forces Alliance became the largest party. Two in the election became the Justice and Construction Party, the political branch of the Muslim Brotherhood. The proposal for a new constitution for Libya presented (November 2012), as in previous Islam, states that state religion and Sharia should be the basis of the legislation. However, the state must guarantee the right of non-Muslims to practice their religion freely.

In the country there are small groups of Christians. The Catholic Church was established in the country in 1642 and today the number of Catholics is estimated at just under 1.5% of the population. Other Christians are about the same and among them are found Copts, Orthodox, Anglicans, those who embrace Unitarianism and Protestant faiths.

The Transitional Council (NTC), which ruled Libya after the regime change, held elections on July 7, 2012, at a national congress, the General National Congress (GNC).

On August 8, 2012, power was transferred from the NTC by Mustafa Abdul Jalil to the GNC by Mohammed Ali Salim, and the NTC dissolved. This was the first peaceful transfer of power in Libya’s history. Mohamed Magarief was elected to lead the GNC and became acting head of state. Elections to the Constitutional Assembly were held in 2014. The new parliament gathered in Tobruk in the east.

As a result of the new elections in 2014, Libya was constitutionally divided by giving the country two (and then three) rival parliaments and governments: one in Tobruk and another in Tripoli. The political-military bloc with its seat in Tripoli is known as (Operation) Dawn; the one in Tobruk (Operation) Dignity.

The Libya Supreme Court rejected the Tobruk parliament in the fall of 2014. In December 2015, the two parliaments agreed to create a national unity government, the Government of National Accord (GNA), led by Fayez al-Sarraj. The government was deployed to Tripoli in April 2016. The agreement was not supported by the two rival governments, and GNA therefore became a third government in Libya.

The Dawn-backed government in Tripoli disbanded itself when GNA was deployed, but parts of it maintained to be Libya’s government. The second center of power, in the renewed civil war of 2014, is in Kyrenaika, where General Khalifa Haftar has taken control of Benghazi. From his power base there he has challenged the government of Tripoli and attacked the capital in the winter of 2019.

General Haftar’s forces took control of large parts of Libya in 2019. They have been supported in particular by Egypt, Russia and Saudi Arabia, while the government forces loyal to Prime Minister Sarraj have received military support from Turkey. A UN-led summit on the situation in Libya, held in Berlin in January 2020, ended with the participating countries committing to the UN arms embargo on Libya, adopted in 2011, and renouncing military assistance to all actors in the war.

The Libyan defense disbanded in 2011, but a new army has been formed: the Libyan National Army (LNA). Militia groups still control much of the country. They have varied in character, from secular to religious. Armed groups were also formed for purely opportunistic – often criminal, partly political – purposes.

Khalifa Haftar’s military forces attacked Tripoli in the winter of 2019, after taking partial control of Fezzan in the south. Haftar has been supported by the United Arab Emirates, Egypt, France, Russia and Saudi Arabia, among others. With his fight against Islamists, including the Muslim Brotherhood in Libya, he has come into conflict with Turkey and Qatar, which supports the Brotherhood. In 2019 more extensive Russian involvement in the war was reported, including with the help of mercenaries. Armed elements from Chad and Sudan must also have participated in the war, especially in Fezzan.

The rise of radical Islamism has been a concern for both parts of Libyan society and foreign actors. Some groups emerged in the 1980s, while others – and larger ones – emerged in the 1990s, including the Libyan Islamic Fighting Group (LIFG). This was behind several military attacks, including the attempted assassination of Muammar al-Gaddafi. From 2011 the group is known as the Libyan Islamic Movement for Change (LIMC).

Libyan jihadists participated in the resistance to the Soviet occupation of Afghanistan in the 1980s; then fought more as foreign warriors in Algeria, Bosnia and Chechnya, and even more in Iraq. Some continued this struggle in Libya, contributing to the establishment of Ansar al-Sharia and Rafallah al-Sahati, among others. This is part of the recruitment basis for the Islamic State (IS), which from 2014 also grew in Libya.

Islamists stand strongest in the east of the country. However, the 2012 elections showed that this direction did not have the same impact in Libya as in Tunisia and Egypt following the uprising there.