According to Countryaah, Malta can historically confirm that its location is its greatest natural value. The archipelago has historically occupied a key position in the conflicts over control of the Mediterranean. Its location between Tunisia and Sicily is a key position for shipping between the western and eastern Mediterranean. In ancient times, therefore, the archipelago was successively occupied by Phoenicians, Greeks, Khartakers, Romans and Moors.

In 1090, the Normans conquered the archipelago and incorporated it into their kingdom in Sicily, from which 300 years later it passed to the Spanish kingdom in Aragon. In the 16th century, the defense of the island was entrusted to the Crusader Order of Caballeros de San Juan del Hospital. They had been thrown out of Palestine and after the fall of Tunis, they sought refuge in Malta in 1574, where they remained for over 2 centuries and were known as the Maltese Order. In 1798 the French threw them out. The Vienna Congress in 1815 formally recognized the “Maltese supremacy” and gave England control over the island.

From the beginning of the 20th century, the Maltese fought for their independence. Following a popular uprising in 1921, London accepted a degree of internal autonomy that was abolished at the beginning of World War II.

The island served as a base during the Allied counter-offensive against Italy. The heroic struggle of the Maltese increased their national consciousness and in 1947 London reinstated their autonomy. 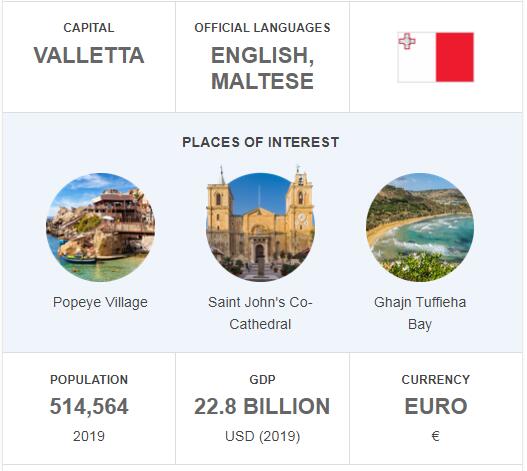 Independence was declared on September 8, 1964, but after signing a 10-year contract, Britain remained responsible for the country’s security and financial assistance. In 1971, the Labor Party came to power. It established relations with Italy, Tunisia, the Soviet and Libya, from which the country received financial assistance. That same year, NATO forces in the country were thrown out, and two years later Malta was included in the Alliance Free Movement.

Relations with Libya became more tense after 1980, after oil exploration began on Malta’s continental shelf. The conflict was resolved by the International Court of Justice in The Hague, and bilateral relations were normalized.

From the beginning of the reign of the working party, measures were taken to reduce the influence of the Catholic Church. The church owned about 80% of the property in the country and largely controlled the teaching. The conflict broke out in 1983 when the government expropriated its possessions and declared primary school education secular. In 1985, the church and government finally signed an agreement that paved the way for a gradual worldization of middle school teaching.