In 2017, Mauritius had a population density of 650 residents per km2. About 90 percent of the population lives on the main island. The population consists of people of European, African, Indian and Chinese origin.

According to Countryaah, 41 percent of the population lives in urban areas, the majority in a belt from Port Louis in the northwest to Curepipe in the middle of the island. The largest cities are the capital Port Louis (148,100 residents, 2018), Vacoas-Phoenix (106,200) and Beau Bassin-Rose Hill (104,400). 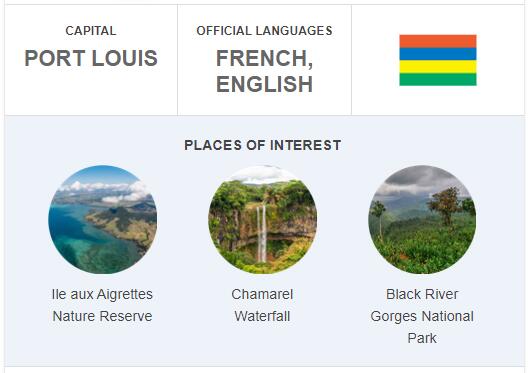 The official language is English, but in practice French is used at least as widely in public contexts. A large number of languages ​​are represented (mainly Indian) among the population. As a lingua franca works Mauritian, a French-based Creole language.

When the first Arab sailors arrived in Mauritius sometime before the 16th century, the island was uninhabited. Portuguese arrived in the 16th century and Frenchmen in the 18th century. In 1810, Britain conquered the island. When the slave trade ceased in 1835, Indians were imported instead of slaves from the African mainland to work on the sugar plantations. Today, Hinduism (2010) is comprised of an estimated two fifths of the population. About one-third are said to be Christian, and the largest community among them is the Catholic Church, which was established in the country in 1722 and today comprises about a quarter of the population, while Protestants’ share of the population is about one-tenth. The Muslims in the country make up about one-sixth of the population. Nine out of ten Muslims are Sunni and the rest are Shia.

There are no references to any higher powers in the Constitution, which means that the Republic of Mauritius rests on secular grounds. Together with other laws, the constitution guarantees freedom of religion, something that the government also actively promotes. The religious communities that existed in the country before independence in 1968 are officially recognized by government decrees and receive financial contributions from the state every year. The size of the grant is determined by the number of members. New religious organizations must be registered to be tax exempt. There are no barriers for foreign religious organizations to carry out missions.

Among the religious holidays which are national holidays are both Hindu and Islamic and Christian holidays.

On the threshold of the 21st century. Mauritius, an independent republic since 1992, still presented considerable political fragmentation, the result of the ethnic, religious and linguistic differences present within it. The main parties – the Mouvement socialiste mauricien (MSM), an expression of the majority Indian community, the Mouvement militant mauricien (MMM), representing the Franco-Mauritians and Creoles, the Mauritius Labor Party (MLP) – struggled to establish stable agreements of government, divided as they were over the strategies to be adopted to combat the growth in inflation and unemployment that had arisen in the late 1990s.

Involved in a series of financial scandals, the MLP, in government since 1995, was beaten in the legislative elections of September 2000, which sanctioned the victory of the MMM-MSM cartel (54 seats out of 62 electives) and led to the formation of a new led executive by A. Jugnauth, leader of the MSMauritius Following the resignation (February 2002) of President C. Uteem (in office since 1992), opposed to the adoption of new anti-terrorism legislation because he considered it harmful to the country’s democratic prerogatives, in October 2003Jugnauth was appointed head of state. The post of prime minister was assumed by Fr Bérenger of the WMM, the first non-Indian representative to hold the post. The new government sought to intensify trade with France and India and signed an economic agreement with Madagascar. At the beginning of 2004 he relaunched, on an international level, the legal battle against Great Britain, aimed at claiming sovereignty over the Chogos archipelago, separated from Mauritius in 1965 (in the years 1967-1973 the residents were deported to Mauritius and the main island, Diego Garcia, was ceded by the British to the United States to establish a military base there).

The July 2005 elections were won by the MLP and its smaller allied parties (38 seats); chief executive was appointed S. Rangoolam (former prime minister from 1995 to 2000). In April 2006, for the first time in forty years, refugees were allowed to visit Chogos.