Moldova’s natural population growth has been relatively high for many parts of the postwar period, measured by European standards. However, it began to decline during the late 1980s and during the 2010s it has been much like the rest of Europe.

During the post-war period, the proportion of Russians grew to 13 percent, while the Romanian-speaking population in the 1940s and 1950s decreased by forced relocation to Soviet Central Asia. Descendants of these are still living in Kazakhstan and the Eastern Russian Federation.

According to the 2014 census, 57 percent of the population regarded themselves as Moldavans and 23 percent as Romanians. Most within both groups are made up of Romanians ethnically, but those who call themselves Moldavians indicate that they regard Romania and Moldova as two different nations. Moldova is also populated by Ukrainians (8 percent), Russians (5 percent), Gagauzer (4 percent) and Bulgarians (2 percent). There are also small groups of Roma, Jews and Poles. In the disputed Transnistria, the share of Moldovans after the civil war has dropped from about 40 to just over 30 percent. The Russians live to a large extent in the cities.

Many moldavers have, during the last decades, moved to countries in Western Europe in the hope of better living conditions. 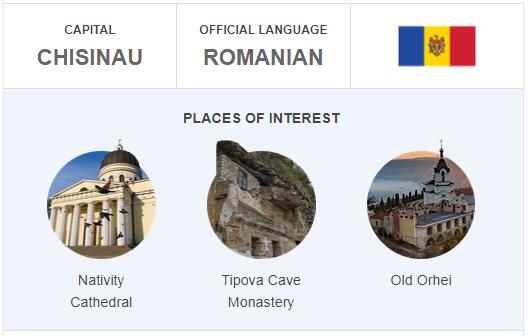 The official language is Romanian. However, according to the 2014 census, half of those who have Romanian as their mother tongue define their language as Moldavian. Other major languages are Russian, Ukrainian and Gagauzian.

Most of the population belongs to the Orthodox Church, with Romanian as the most important church language. Also the Gagauzic speakers are Orthodox. There are about 30,000 Jews in the country.

The struggle for democracy and national self-determination in Moldova when the Soviet Union collapsed followed, in essence, the pattern of the Baltic states. Moldova’s first non-communist National Assembly declared in June 1990 the country’s sovereignty. Following the unsuccessful coup against USSR Mikhail Gorbachev in August 1991, Moldova, like most other Soviet republics, declared its independence on August 27, 1991.

The resistance of the Slavic-speaking population to sovereignty and independence of the former Soviet Republic was more pronounced in Moldova than in the Baltic States. This was linked to a fear that independence would be the first step towards a reunion with Romania. The opposition was most strongly expressed on the eastern side of the Dnestr, where Russians and Ukrainians together were in the majority, but also among the Turkish-speaking Gagauss in the south of the country. In September 1990, an autonomous Soviet republic was proclaimed on the eastern side of the Dnestr (Transnistria), something the Moldovan government did not accept. From the end of 1991, the conflict between the outlaws and the central government in Chişinău went on into a state of war that lasted until the summer of 1992. More on that below in the section “Resistance to Moldova as a Unified State”.

The first parliamentary elections in independent Moldova took place in February 1994 and were won by the Agrarian Democrats. They received 43 percent of the vote and a pure majority in parliament. Parties that either wanted reunification with Romania or a close relationship with Russia were the losers. The Agrarian Democrats formed a new government that took office in April, led by Andrei Sangheli. Immediately after the election, a referendum was held in which 95 percent supported continued independence for Moldova, both in relation to Romania and Russia. The Agrarian Democrats split in the summer of 1995 when President Mircea Snegur broke with the principle of independence.

In the spring and autumn of 1995, there were a number of major strikes and demonstrations in the capital Chişinău, where the students were especially active. Alongside accusations against the government’s economic policy and the increasing social need, the language issue was raised. It probably influenced Snegur to adopt his new position that the only scientifically correct one is to call the language Romanian, and that the name question must be considered regardless of a possible reunion with Romania. He failed to get parliament in his new view, and in the presidential election in the fall of 1996 he lost in favor of parliament president Petru Lucinschi, the former communist leader.

Moldova’s new constitution, which was passed in the summer of 1994, included provisions that would prevent a new union with the Commonwealth of Independent States or Romania. It was stated that the country should be permanently neutral, that foreign forces could not be stationed there, and that the name of the language should be Moldovan, not Romanian. Transnistria and Gagaus were granted opportunities for considerable regional autonomy. Due to the Transnistria conflict, the provision has only affected Gagaus.

In 2000, the constitution was changed so that from then on the president would be elected by parliament with a three-fifths majority. In 2016, the Constitutional Court ruled that the change from 2000 was unconstitutional and that the country’s president should be re-elected by direct elections, the first time in the fall of 2016.

Resistance to Moldova as a unitary state

Following the Moldovan sovereignty decision of May 1990, skepticism from the Slavic speaking population led to the declaration of an autonomous Soviet republic on the eastern side of the Dnestr (Transnistria) in September, where the Slavic speakers are in majority. The Romanian-speaking Moldovans make up 40 percent in the breakaway republic, while 28 percent are Ukrainians and 25 percent Russians. The total population is about 550,000.

Before the Dnestr Republic was proclaimed, in August 1990 a separate Gagausian republic had been declared in southern Moldova. In both regions there were armed clashes, in Transnistria also regular war actions. In Gagaus there existed a “Gagausian Socialist Republic” from 1990 to 1994, which was not recognized by anyone. After negotiations, a solution was reached that respects widespread self-government for the Gagauss, but within Moldova’s constitutional framework. From December 1994, Gagaus thus has the status of “autonomous territorial unit” in Moldova. The capital is Comrat. The agreement states that Gagaus will have the right to independence should Moldova cease to be an independent state.

In Transnistria, a state of war developed from the end of 1991, which continued until the summer of 1992, when Moldova, Russia, Romania and Ukraine negotiated a ceasefire agreement. Around 700 people had lost their lives, tens of thousands had fled their homes, and there were major material destruction. As Moldova’s president, Mircea Snegur had to agree with Russian President Yeltsin’s demand that there be Russian “peacekeeping” forces there. The outbreak republic thus received preliminary protection. In October 1994, Moldova and Russia signed an agreement that all Russian forces should retire within three years. In March 1995, the local authorities held a referendum which gave a large majority against the planned withdrawal.

Nationalist Russian politicians have repeatedly engaged in the Transnistria issue, and in November 1995, they made the Duma in Russia a decision urging President Yeltsin to declare the area of ​​strategic interest to Russia. Moldovan President Snegur condemned the decision as an interference with Moldova’s internal affairs.

In May 1997, an agreement was signed in Moscow between the breakaway republic and Moldova on how future relations should be within Moldova’s original borders. The Russian forces were to be supplemented by the Ukrainian in the role of peacekeeping forces, and thus would not be withdrawn in 1997, as previously assumed. OSCE has for many years been committed to finding a solution, including a proposal for federalization in 2002. In the final declaration of the OSCE summit in Istanbul in 1999, Russia had agreed to a complete withdrawal of Russian forces by the end of 2002, something which was not completed. A 2003 Russian federalization plan (the Kozak Plan) envisaged a demilitarized Moldova combined with rules that would make it easy for Transnistria and the Gagus region to block Republican-level decisions.

In 2004, there was a serious crisis between the Moldovan government in Chişinău and the outbreak in Tiraspol after several schools that taught Romanian using the Latin alphabet had been closed. Gradually, Moldova has encouraged the EU to get involved in the conflict. From 2004, Russia’s position on the Russian military presence is that soldiers and equipment have already been withdrawn to the extent necessary. The remaining forces are only part of a peacekeeping force, and will not be withdrawn until a solution to the conflict between the outbreak republic and the Moldovan authorities in Chişinău has been reached.