In the 2011 census, Montenegro had 620,000 residents, almost exactly as many as in the previous census (2003). The relocations have meant that the country has in recent years had a larger relocation than immigration, but this has been offset by the fact that Montenegro has had a natural increase in population. The country thus differs from some other countries in southeastern Europe, where the number of deaths exceeds the number of births annually. For population statistics, see country facts.

The ethnic composition of the population has changed significantly since the mid-20th century. Around 1950, more than 90 percent were integrals, at the 2011 census only 45 percent. Their share decreased mainly in the 1970s and 1990s. The Montegrines live mainly in the southern and central parts of the country. In 1950, less than 2 percent of the residents were Serbs. Their share increased gradually and tripled during the 1990s. Now they are close to 29 percent. The Albanians’ share has remained unchanged throughout the period, about 5 percent. In recent years, Bosnians havecounted as a separate category. In 2011, they made up 9 percent of the population of Montenegro, and they live in the country’s easternmost parts. The Romans then made up 1 percent, an equal share of the Croats. Ethnic affiliation data was missing for 7.5 percent and among them there are likely to be many refugees, including Roma. The debate in connection with the 2011 census showed that the ethnic data is difficult to interpret. No less than 43 per cent of the population indicated that they spoke Serbian while only 37 percent spoke Montenegrin. 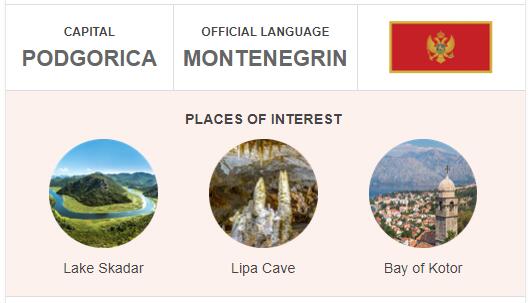 The official language is Montenegrin, which, like the Serbian, Croatian and Bosnian standard languages, is based on štokavian dialects. Languages ​​recognized as regional or minority languages according to the Council of Europe’s language statute are Albanian and Romani. The Montenegrin language paragraph states that in addition to Montenegrin, Serbian, Bosnian, Albanian and Croatian can also be used officially.

The Turkish conquest, however, did not bend the minds of the population, nor did it completely break up that political unity which, especially in the century. XV had been forming. The Turks, victorious, occupy and can maintain themselves only in the lower part of Montenegro. The populations, broken at any discomfort, very practical in the mountains, intolerant of the Turkish yoke, withdraw to the mountainous areas and particularly to the inaccessible and inaccessible region of the Brda (mountains) where, forbidding the Turks any access and any exercise of dominion, they maintain themselves, at the cost of continuous blood sacrifices, fully independent. For almost two centuries Montenegrins live almost cut off from history, patriarchally organized into pleme (tribe) at the head of which are vojvode (commanders), recognizing only the spiritual dependence on Cettigne’s vladika. The recovery of Christianity against the Turks makes them part of history, once again on the side of Venice. In 1684 Austria, Poland, Venice and the Holy See formed the Holy League. The tribes of Montenegro rise up and proclaim the sovereignty of Venice. The troops of the republic entered Cettigne in 1688. The war, however, ends without Venice being able, in the Treaty of Carlovitz (1699), to ensure that Montenegrin aspirations are satisfied. The vladikas of the Petrović-Niegoš house are responsible for having fully realized them.