In 2019, the population density was estimated at 78 residents per km2, but due to topography and climate, the regional distribution is very uneven. The most densely populated are the coastal areas in the northwest and the precipitous high plains at Fès and Meknès.

According to Countryaah, the proportion of urban population in 2019 was 63 percent. Migration from the countryside is very large, which has given rise to slum cities (bidonvilles), including around the country’s largest city, Casablanca (3.4 million residents, 2015).

The number of Arabs and Arabs is almost 66 percent of the population. The rest is mainly berber. The Arabized Berber is mainly found in the coastal plains while the Berber is traditionally concentrated in the Atlas Mountains, but urbanization in the lowlands has changed this relationship.

Among the Arabized Berbers are Jebala (1 million), who live in the northern parts of the country. that both women and men wear characteristic large straw hats. Ghomara south of Tetuan is also a partially Arab group, although small groups around Bni Buzra still dominate the old Berber dialect. There are several major Berber people who still speak their language, including the nearly 5-7 million reefs (infyen) in the country’s northern mountainous regions and the Spanish city and the Melilla enclave. In addition, there are 8 million shilha (ichelhiyen) living in the High Atlas and Anti-Atlas and 3.2 million imazighen (Arabs) in the Middle Atlas. The Berber people consist of a number of tribes and dialect groups.

The Jewish population, which previously existed in most cities, has since the end of the 1960s emigrated, and today only a small residual population remains in Casablanca. Small contingents of French and Spaniards as well as a considerable number of Lebanese are also resident in the country.

The ethnic differences were greatly exaggerated by the French colonial power, which in vain tried to mobilize the Berbs against the Arab majority. The actual differences are now insignificant and are mainly expressed in the mother tongue of the individuals. However, most Berbers are bilingual. Their sense of belonging is directed at tribes and regions rather than a hypothetical Berber nation. The significance of Islam for the legitimacy of political power is striking. Despite the upheavals during the 20th century, Morocco has a greater continuity with its past than other Arab countries do. 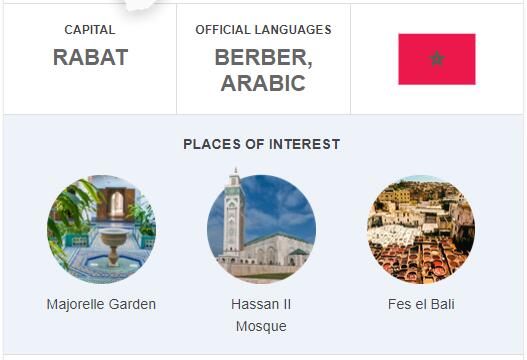 The official language is Arabic. The majority of the population (about 60%) speak Arabic gastric trib dialect, which is found in both hadari and badaw variants. The Berber language riffs (tarifit), tamazight and shilh (tachelhit) are spoken mainly in the countryside. French still has a strong position.

In 710, the Arab-Islamic conquest of Morocco began and today (2010) almost all Moroccans are Sunni Muslims of the Malikite law school. According to the government, there are also an estimated 3,000 Shia Muslims in the country, who do not have their own mosque.

Sufism and Sufism more generally have a prominent role in religious life. The saintly worship (marabut cults) and pilgrimages to local sacred tombs are common, but face criticism from some more orthodox and Islamist circles. Of the others, just under one in 100 are said to be Christians, and most of them are members of the Catholic Church, established in the country in 1220, and today the number is estimated at just over 20,000. Protestants, Anglicans, Orthodox and independent Christians amount to just under 8,000.

Morocco is a monarchy and King Muhammad VI, like his father, invokes the kinship of Prophet Muhammad, which contributes to the legitimacy of the dynasty. The king is “the commander of the faithful”, but according to the 2011 constitution also “the guarantor of free religious practice”. According to the new constitution, Islam is still state religion. The state should guarantee everyone the freedom to practice their religion, which in general seems to work in practice in such a way that nobody is oppressed because of religious affiliation. However, government policy actively discourages Muslims from converting to another religion and the dissemination of non-religious religious material is prohibited. Citizens can be punished if they present opinions that can be considered harmful to Islam. A Muslim man can, by law, marry a non-Muslim woman, but if a Muslim woman wants to marry a man who is not a Muslim, he must convert to Islam. By law, parties based on religious grounds are prohibited. On the other hand, what the government refers to as Islam-oriented parties, to which the Justice and Development Party is counted.

Religious organizations must be registered. Among registered Christian churches are Catholic, Russian Orthodox, Greek Orthodox, French Protestant and Anglican, all churches operating in the country prior to the liberation from France in 1956. Some foreign Christian organizations operate, with the government’s permission, churches, orphanages, schools and hospitals. Religious organizations, both Muslim and Christian and Jewish, can receive tax benefits, land and other grants.

In the government’s annual budget for education, money is allocated to teaching Islam in all public schools and in Judaism in some public schools. Similarly, the state finances university courses in Jewish culture and Jewish science history. The Department of Islamic Studies at Rabat University offers courses in Hebrew and Comparative Religious Studies. Since 2006, the government has been running the mourchidaat project, which has two purposes: to increase women’s spiritual participation and to increase tolerance towards them. Their demands are the same as those of male imams, but women are not allowed to lead Friday prayers in mosques or lead prayer groups. Instead, they concentrate on women’s needs, giving advice on their legal rights as well as religious instruction.

The following Islamic holidays are national holidays: Prophet Muhammad’s birth, Id al-fitr, Id al-adha and the Islamic New Year. There are no obstacles for Christians and Jews to celebrate their holidays.