According to Countryaah, the country has a population density of 191 residents per km2, but the regional differences are large. The most densely populated are the plain (Tarai) in the southeast and a restricted area around the capital. Glesast lives in the highlands in the northwest. In the mountain areas, however, the development is concentrated on the cultivated land in the valleys, and there the population density can be very high. Only a small proportion (20 percent) live in cities.

The population of Nepal consists of a large number of ethnic groups and castes, of which Nepali, Pahari and Biharitan Hindus constitute the majority (81 percent according to the 2001 census; see also gurkha). These disintegrate into a number of caste groups; the high-caste groups of Brahmins, chetri and thakuri dominate numerically and politically, while low-caste groups of craftsmen and “caste-free” are a minority. The Hindus are predominantly in the southern (Tarai) and middle parts of the country, where they mainly feed on agriculture. In the Tarai there are also the Indian-speaking, agricultural Tharu (7 percent), who are more Mongolian in appearance and whose religion is a Hindu-embedded tribal religion. The people who inhabit the plain of Tarai usually have a collective term called madheshi.

The rest of the population consists of Tibetan Burmese groups. Newar (1.3 million or 5.5 percent) dominate the Kathmandu Valley, whose civilization they founded in the 500s BC, and whose solid two-story brick houses are characteristic both in cities and in rural areas. Newar is farmers, traders and craftsmen; their religion is a mixture of Hinduism and Buddhism. Tamang (6 percent), rai (3 percent) and limbu (1 percent) in the east, and stomachs (7 percent) and gurung (2.5 percent) in the country’s central and western parts are all Buddhist farmers and livestock keepers.

In the Himalayan region there are Tibetan peoples (including Bhutia) who feed on agriculture, breeding of yaks, sheep and goats as well as long-distance trade. The most famous are Sherpa (155,000 according to the 2001 census), which is also hired as guides by foreign mountaineers. Tenzing Norgay who reached Mount Everest in 1953 was a Sherpa. In western Nepal there is a small group of collectors and hunters called kunduk, with the self-titled mihaq. They amount to only 160 individuals (according to the 2001 census) and speak an isolated, rapidly disappearing language. 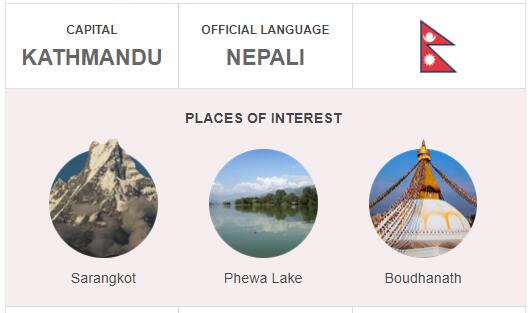 Hundreds of languages and dialects are spoken in Nepal. Most belong to the indigenous language family. The official language of nepali is spoken by about 50% of the population, maithili by about 11%, bhojpuri by about 8% and avadhi by about 5%. The classical Tibetan Burmese literary language newari and its dialects are today spoken by smaller groups, as well as oral languages.

Nepal’s diverse population picture is matched by an equally composed religious mosaic. For a long time, developed scriptural religions such as Hinduism and Buddhism have been in contact with the oral traditions of the tribes. In the Kathmandu Valley, with long continuity back in time, a distinctive and ritualistic form of Buddhism has developed alongside the increasingly dominant Hinduism since the Middle Ages. Both religions have helped to shape the unique culture of the New People, including manifested in a high-rise building art.

In the northern part of the country, in recent centuries, Lamaism has come to characterize the religion of many peoples. Sherpa, while those living in the lowlands of the south mainly comprise Hinduism. In many minority people in both the east and the west, a traditional religion that has preserved many shamanistic features and which is characterized by the cult of local and reverberating divinities survives.