In 2019 Nicaragua had an average population density of 50 residents per km2. According to Countryaah, the most densely populated are the Managua area and the lowland to the west, while the autonomous Atlantic coast is sparsely populated. Nicaragua, like its neighbors, has a young population. During the 1980s, infant mortality fell sharply, but cuts in the health budget destroyed previous progress and now the country’s infant mortality rate is one of the highest in the region.

In 2019, 59 percent of the population lived in cities. The dominant city is the capital Managua (1 million residents, 2018).

The original population of Nicaragua was made up of burning and cassava-growing Indians, who probably immigrated from the south. During the 900s, a new wave of people from the north came from Mesoamerica, possibly suppressed by more militant cultures such as Maya. Columbus visited Nicaragua’s Atlantic coast in 1502, and later in the same century began the Spanish colonization, which quickly changed the population structure and made Spanish the dominant language in almost the entire country. In the central parts of Nicaragua, the Indians were expelled or assimilated. Only on the Atlantic coast could they maintain their independence and then through intensive contacts with the English.

During the 19th century came the last significant immigration, that of black former slaves from the Caribbean. They came to reinforce the already clear regional cultural conflict in Nicaragua between the West (Spanish) and the East (English/Native American languages), since most of them were English speakers. Only three Native American groups have been preserved as distinct ethnic units, namely Miskito, Sumo and Rama. 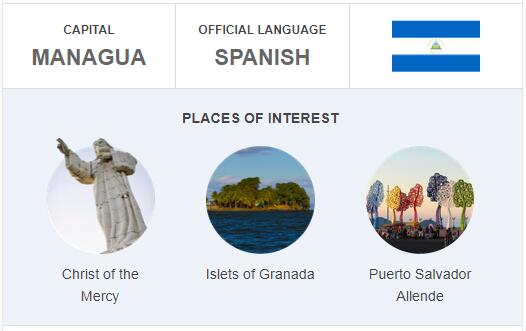 The official language and mother tongue of most of the population is Spanish (80%). The Indian population mainly speaks some misumalpa language, such as sumo and especially miskito (3%), which is also widely used in elementary school education and as a trade language. There is an English-based Creole language on the Caribbean coast.

The colonial church legitimized the destruction of Native American religions. In 1550, Bishop Antonio Valdivieso was assassinated because of his defense of Native American rights. After independence in 1824, Methodists, Baptists and Presbyterians came to Nicaragua. The Miskito people of the Atlantic coast, who, after 1884, were missionary to men’s hutism, today belong to about 40,000 the Moravian church. 90% of the population are Catholics and 10% Protestants. There is a growing Pentecostal movement. Strong polarization emerged after 1979 between the regime’s anti-Sandinist policies and the support of many Christians for the Sandinist resistance movement.

The situation was aggravated by the terrorist and guerrilla actions carried out by about two thousand members of the disbanded National Guard, who since the end of 1979 had established their bases in Honduras, obtaining the support of the government of this country. From 1981, with the advent of the Reagan administration, even the United States, which accused Managua of sending weapons to the revolutionary forces of El Salvador, began to actively support the anti-Sandinist guerrillas (the so-called contras) and from 1982 they were able to rapidly increase its numbers (up to about 15,000 in the mid-1980s), to multiply military operations and to launch attacks even from the territory of Costa Rica.

The increase in tension in Nicaragua and the introduction of restrictive measures by the government (which in March 1982 proclaimed a state of emergency) caused a worsening of relations between it and the internal opposition, a part of which began to support the anti-Sandinist guerrillas, while further contrasts were generated by the divisions in the Catholic Church between priests engaged in the revolutionary process (some even with government posts) and hierarchies hostile to the Sandinistas, by the autonomist claims of the Indians of the Atlantic coast (in particular the Miskito) and by the foreign policy of Managua, which, although admittedly not in line with the deterioration of the Central American situation, increasingly found its main interlocutors in Cuba and the Soviet Union.

The difficulty of the situation led the Sandinistas to postpone the planned general elections until 1984, when, after an electoral law was approved by the Council of State and the state of emergency was suspended, they were finally able to take place on 4 November. Despite the boycott of relevant opposition forces, the consultation, recognized as correct by international observers, saw the participation of 75% of the electorate: the FSLN obtained 67% of the votes and 61 of the 96 seats in the National Assembly (constituent in the first two years of activity, legislative in the following four years); 29 seats went to three conservative parties and 6 seats to three small leftist formations. In the contemporary presidential elections, Ortega was confirmed at the helm of the state and executive; on January 9, 1985, when the Council of State and the provisional government were dissolved, the new institutional bodies came into operation. The Constitution, drawn up by the National Assembly with a long process, which also included moments of popular consultation, was finally approved in November 1986 and promulgated on January 9, 1987; presidential type, it established the direct election of the President of the Republic and of the National Assembly every six years. Despite the formalization of the new institutional structure, the conditions of the Nicaragua remained very difficult and from October 1985 the government re-established the state of emergency. The main problem for Managua was the intense pressure exerted on the country by the United States by sending large forces to the region. contras, the total trade embargo against the Nicaragua established in May 1985.