As heirs of the old Nok civilization, the Yoruba people lived in cities surrounded by high walls and equipped with wide boulevards. Already from the 9th century a democratic system existed around the city administration with a mayor and a city council elected by the inhabitants. Artistically, civilization did wonderful things in terracotta and bronze sculptures. In it 10-11. century, Ifé, Oyo, Ilorín and Benin were the most important city states of a confederation, whose influence extended from Niger to present-day Togo. (Benin is not to be confused with the current state of the same name).

From the outset, the city of Ifé was considered to be the most important religious center, and it remains so. The oni from this city is the chief priest of all the Yoruba people. In contrast, the city of Oyo led by the Alafin (king) played a central economic role until the 16th century due to the trade in slaves. The city began to decay as a ban on slave trade was introduced.

Alongside the slave trade, palm oil, cotton and peanuts from the 19th century came to constitute the most important British import from the South Nigeria protectorate. Nigeria emerged as a national entity only in 1914 when the British merged the protectorates of Northern Nigeria and Southern Nigeria. The colonization of the area took place in stages and was completed at the beginning of the century. Most of the territory had to be conquered by military force. 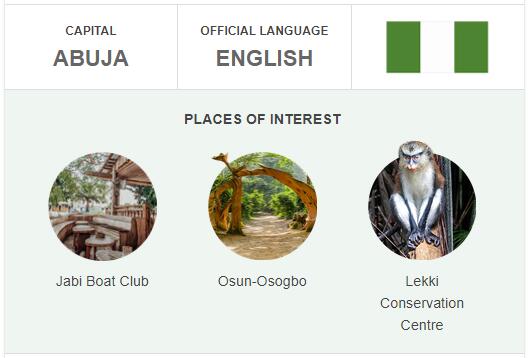 The immediate reason why the British used armed force to secure trade was conflicts and wars between the states and peoples of the area, but also direct opposition to the British taking over the intermediary in trade. The British state took over responsibility from The Royal Niger Company when it became clear that in the late 19th century the company was unable to maintain effective control. The West African Frontier Force was established under the leadership of Lord Lugard to conquer northern Nigeria.

The unification of Nigeria was thus a result of the needs of the colonial power. No natural conditions formed the basis of the country’s borders. The central British administration in Lagos was long Nigeria’s only government organization. It was not until after World War II that a joint political forum for Nigerians – the Central Legislative Council – was established, which brought together the British selected partners from the three administrative areas – Northern, Western and Eastern Nigeria.

The dominant issue of post-war Nigerian politics was the distribution of power and competence between the peoples and the regions among themselves, and between them and the central government. National independence had then become the common goal of the parties, and a gradual expansion of the Nigerian political institutions should prepare for the transition. The parties became both regional interest groups and advocates for liberation at national level.

Three major parties dominated political life in the 1950s: The National Council for Nigeria and the Cameroons (NCNC) under Nnamdi Azikiwe – the unifying figure of Nigerian nationalism – became increasingly an East Nigerian party, with strong ties to the Ibbo people. In the northern part, Ahmado Bello formed The Northern People’s Congress (NPC), which was dominated by chiefs. The Action Group led by Obafemi Awolowo in the western region became predominantly a party for the Yoruba people.

The western and eastern regions gained internal autonomy in 1956, the northern region in 1959. By independence on October 1, 1960, the NPC and NCNC formed a coalition government, with The Action Group in opposition in the National Assembly. NPC parliamentary leader Sir Abubakar Tafawa Balewa became prime minister, Awolowo became leader of the opposition and Azikiwe became general governor and then president when Nigeria became a republic in 1963.

Abuja, capital of Nigeria, 500 km northwest of Lagos; 1. 4 million residents (2010), including suburbs. Abuja was originally founded in 1828 as the residence of the first emir of Abuja, but remained a relatively insignificant city for a long time. In 1976, Abuja, located in a relatively sparsely populated agricultural area where none of the country’s three major ethnic groups predominated, was named future capital. The location of the capital functions to Abuja is expected to help unite the ethnically and religiously highly divided country.

In 1982, Abuja was formally inaugurated, but the extension was delayed and only in December 1991 could the official appointment take place. State institutions, etc. are gradually moving, but Lagos is still the country’s economic and administrative center.