Papua New Guinea is an independent state of Oceania that encompasses the eastern half of New Guinea, the world’s second largest island, and approximately 600 surrounding islands and atolls. According to Countryaah, the land area is 462 840 km 2. The western part of New Guinea, with the provinces of Papua and West Papua, belongs to Indonesia. The Torres Strait separates the country from Australia. In the east, Papua New Guinea borders the Solomon Islands. The population is around 7.4 million people (World Bank 2014). 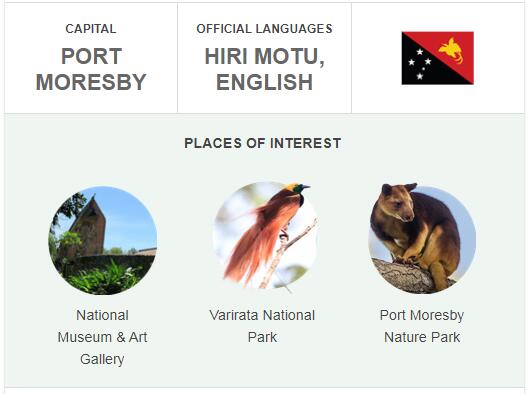 The Portuguese adopted the name Ilhas dos Papuas for the area in the 18th century, but the origin of the name Papua is unclear. The most popular belief is that it derives from the Malay word for “frizzy hair” (papua), while another theory claims that it comes from the word biak people west of the island used for “the land during [the sunset]” (sup in papwa).

New Guinea was the name European explorers later used on the island because the people they met reminded them of Guinea’s people in Africa. When Papua New Guinea was divided between colonial powers Britain and Germany, were Papua used for the British in the south and New Guinea (Neuguinea) for the northern German part. Papua New Guinea is known for the rainforest’s unique flora and fauna and its cultural and linguistic diversity.

Papua New Guinea has been independent since September 16, 1975. The national anthem is O Arise, All You Sons.

In March 2013, Thai Prime Minister Yingluck Shinawatra visited PNG – the first Thai state visit to the country. During the visit, O’Neill pledged to make sure that private Thai companies had access to agreements with PNG’s lucrative natural gas sector.

In July 2013 Parliament expanded the legislation on the death penalty so that 4 different murder methods can now be used against the former 1. At the same time, the death penalty can be sentenced for a number of additional crimes such as robbery and rape. Although there were 10 convicts on death row, the sentence has not been enforced since 1954. Yet the changes were sharply criticized by human rights organizations.

In 2013, Australia signed an agreement with PNG to send refugees and asylum seekers from Australia to PNG. Here they were collected in a center on the island of Manus. In July 2013, there were 1,270 refugees in the center. At the same time, Australia suspended the processing of the asylum applications. In February 2014, therefore, violence broke out at the center, where 147 asylum seekers were injured and 1 killed. The asylum seekers were attacked by private security guards and the local police. Despite criticism from human rights organizations, both PNG and Australia declined to investigate the circumstances. Australia’s refugee and asylum policy is one of the most inhumane in the region.

In June 2014, the anti-corruption unit issued a Task Force Sweep arrest warrant against Prime Minister O’Neill for stealing $ 31 million US $ in public funds for themselves. O’Neill responded again by immediately disbanding the unit and arresting its senior police officers. The unit had been set up in collaboration between the Department of Justice and the police. PNG’s GDP was quadrupled in the period 2010-14, but due to widespread corruption, the newly created wealth does not reach far into society.

Also in June, police burned about 200 houses down in the village of Wingima near the Porgora gold mine in central PNG. The mine is predominantly owned and operated by Canadian mining company Barrick Gold Corp. The month before, police had put the area in a state of emergency and in December 2013 there were reports of violent clashes between local and mining company private guards.

Papua New Guinea State of Oceania, whose territory includes the entire eastern section of New Guinea, the Bismarck Archipelago with the Admiralty Islands, the Northern Solomons, the D’Entrecasteaux, Trobriand, Woodlark and the Luisiade Islands, as well as numerous smaller islands. The land border with Indonesia (the western section of New Guinea belongs to Indonesia since 1963 and is divided into the two provinces of Papua and West Papua), almost everywhere straight, is purely conventional.