In 2019, Poland had a population density of 122 residents per km2; the largest population concentration is found in the southern parts. According to estimates (no exact statistics on minority groups exist yet) the largest minority groups are Germans (150,000), Belarusians (50,000) and Ukrainians (50,000). Poland, which had 34.8 million residents in 1939, lost 6 million citizens in the Second World War.

During the period 1945–50, large migrations took place mainly by the emigration or deportation of Germans in western Poland and replaced by Poles displaced from the country’s former eastern parts. A total of 4–5 million people were relocated in the western area.

Prior to World War II, there was a significant Jewish minority (about 10 percent of the population), concentrated in cities and with a distinctive culture. During the German occupation, the Polish Jewish unit was obliterated. Of the approximately 30,000 survivors, most were driven by an anti-Semitic wave in the late 1960s. Today there are a few thousand Jews in Poland. 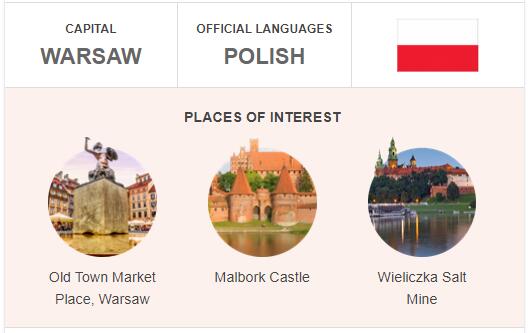 According to Countryaah, the national language is Polish, which is spoken by about 98% of Polish citizens. The largest minority languages are Ukrainian, German, Belarusian and Kashubian; however, the latter is often regarded in Poland as a Polish dialect.

Poland’s history is closely associated with the Roman Catholic Church. During the 16th century great religious tolerance prevailed. Calvinism and unitarism had many followers among the nobility. During Sigismund III, the counter-Reformation was carried out by the Jesuits. Particularly important for understanding the role of the church is the Swedish retreat in 1655 from Częstochowa, which was attributed to the intervention of the Virgin Mary. The following year she was declared by Johan IIKasimir as “Queen of Poland”. Alongside the Mariakult there is a strong belief in Poland as Europe’s suffering Christ, a thought developed during the time of Poland’s divisions. Polish messianism in the 19th century (especially with Adam Mickiewicz and Juliusz Słowacki) has solidified Polish hopes for the future during political crises and was of great importance in Poland’s liberation from communism. In Poland’s liberation from communism, the Catholic Church played a crucial role, especially through Pope John Paul II’s visit to Poland in 1979 and his support for the trade union Solidarity and its leader Lech Wałęsa. The Polish-born pope, who was previously Archbishop of Kraków, again aroused Catholic and national sentiments that would have devastating political consequences. In democratic Poland, the church has played a major, according to some too great, political role.

More than 90% of the population belong to the Catholic Church (2010), whose significance as a national identity factor is still significant. An autocephalous (self-governing) Orthodox church has about 500,000 members. Jehovah’s Witnesses are 127,000, Protestants about 150,000, of whom Lutherans are about 80,000. Two church communities of Polish origin are the Polish National Catholic Church with 20,000 members and the St. Mary’s Church with 24,000; both are outbreaks of the Catholic Church. Regarding the Jews of Poland, see the section Population.

Together with 88 other prominent Poles, President Lech Kaczyński and his wife perished on April 10, 2010, when the presidential plane crashed in Russia on the way to Smolensk in connection with the 70th anniversary of the Katyn forest massacre, see the article “The accident in Smolensk”.

President of the Sejm, Bronisław Komorowski of the Citizen Platform (PO) then took over as the country’s acting president. He won the second round in the presidential election on July 4, 2010 with 53.01 percent of the vote. The opposing candidate was Lech Kaczyński’s twin brother and leader of the Party of Law and Justice (PiS), Jarosław Kaczyński.

In May 2015, Bronisław Komorowski lost the presidential election against Andrzej Duda from PiS. Andrzej Duda, who won the second round with 51.55 percent of the vote, was elected president on August 6. Andrzej Duda is the Party of Law and Justice (PiS) candidate in the presidential election, which should have taken place on May 10, 2020. Due to the coronavirus pandemic, PiS and a support party in Sejm on May 6 announced that the election will be postponed. The parties stated that as soon as the Supreme Court accepts that the election is postponed, the President of Sejm must state a new election date.

In light of the country’s strict abortion policy, civil society has become increasingly engaged in this issue over the past ten years. In Poland, abortion is only allowed if a) the woman’s life is at risk, b) it turns out that the child will be handicapped or will suffer from incurable disease or c) the child is conceived by rape or incest. After 2005, several non-governmental organizations advocated the liberalization of abortion laws, which the Catholic Church opposed. None of the major political parties challenged the Church’s view.

After the Party of Law and Justice, which had supported the church’s view, received both the presidential and prime ministerial positions in 2015, the government presented a bill in 2016 on total ban on abortion. Only in cases where the woman’s life was in danger would abortion be granted. At the same time, it was proposed to increase the penalty for illegal abortion from two to five years in prison, both for the doctor and the woman in question. This led to extensive demonstrations in Poland and to reactions from, among others, the Council of Europe. Against this backdrop, the government dropped the proposal to tighten abortion legislation. However, many pregnant Polish women continue to choose to have illegal abortions performed in Poland at risk of their own lives or to travel to other countries, especially Germany, to have an abortion there.

Both before and after the 2019 parliamentary elections, the government has waged a hateful campaign against LGBT people (lesbians, gays, bisexuals and transgender people), who are characterized by the government as the nation’s enemies. As a result, a number of municipalities and cities in Poland have introduced LGBT-free zones. The establishment of these zones has been heavily criticized by the opposition parties and a number of voluntary organizations, as well as by the EU.