According to Countryaah, the Romanians are descended from the roofs and goats sold in the 4th century BCE as slaves in Athens. They have named the Roman province of Dakia in the Carpathians and Transylvania a little northeast of the territory that is today made up of Romania. In the 1st century BCE, the Dakies built a strong empire that, in alliance with other peoples, provided fierce resistance to the Romans. But Rome was interested in gaining access to the area’s mineral wealth, defeating the Dacians in 106 and killing all its residents or sending them out of the area to the north. 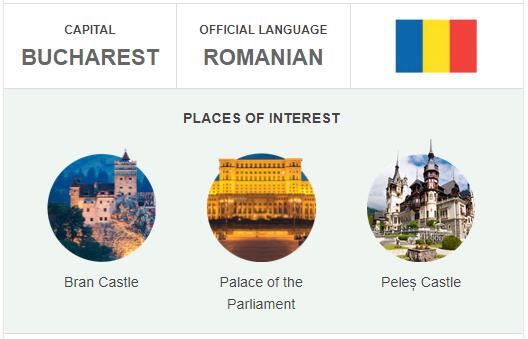 The province was initially subject to a Roman consul before being divided into respectively. Upper and Lower Dakia. Roman Emperor Aurelius withdrew from the area in 270 because he needed his troops in the area south of the Danube, but the influence of Roman language and culture has survived to this day. Romanian belongs to the Latin language tribe.

In the period from the 3rd to the 12th century, the area was invaded by Germans and slaves. The Bulgarian dominion lasted for a few centuries, managed to develop a significant social organization and introduced Christianity in its Oriental form. In the late 9th century, the Bulgarians were thrown out of the Hungarians. Transylvania was conquered by Hungary in the 11th century, but the tartar-Mongol invasion of 1241 wiped out all traces of the people who originally inhabited the area. In the 13th century, the Transylvanian ethnic group Vlach reappeared south of the Carpathians, in Valakia and in Moldova.

In 1290, the state of Valakia was created when the prince of Fagaras and his followers crossed the mountains and settled in Cimpulung, from which they later moved to Curtea de Arges. The migration to the south is probably due to the arrival of Germanic tribes and the consolidation of the Hungarian feudal power in Transylvania.

Up to Mircea the old reign (1386-1418) the principality fought for independence from Hungary. From that point on, the Ottoman Empire became the area’s biggest problem. In the wars against Hungary, Valakia allied with Bulgaria and Serbia, but both kingdoms were on the verge of being swallowed up by the Turks. After defeating the Serbs in 1389 in Kosova, the Ottoman Empire increased the pressure on Valakia, which was further intensified when Bulgaria fell in 1393. The principality capitulated in 1417 to Sultan Mehmed I, although the Mircea dynasty, the territory and the Christian religion remained intact.

Mircea died in 1418, triggering a period of political instability. The princes replaced each other at short intervals until the Turks began to rule through princes appointed by the Sultan himself. After the Battle of Mohacs in 1526, the Turks administered the region through its own governor. In 1594, Prince Mikkel, in alliance with Transylvania, carried out a massacre on the occupying power and invaded Turkish territory. After several counter-offenses failed, the Sultan had to recognize the sovereignty of Valakia, and from then on the country became attached to Hungary. In the year 1600, Mikkel conquered Moldova and proclaimed prince. Rudolf II recognized Mikkel’s titles, although he later tried to conquer Moldova and Transylvania from him.

In the 17th and 18th centuries, Valakia and Moldova came under Turkish rule, and were for some time administered by the Greeks until the Russians conquered the area in 1769. In 1774, Austria was forced to return the principals to the Sultan – albeit in a less dependent form. Russia again invaded the area in 1806, but retained by the Bucharest Peace in 1812 only southeastern Moldova – Besarabia.

In 1828 a new Russian-Turkish war took place. With peace the following year in Adrianópolis, the principals continued to pay taxes to the Sultan, but during Russian occupation. Russian troops remained in the region and the princes began to reign for life. The nobility crafted is a form of constitution introduced in Wallachia in 1831 and in Moldova in 1832. In 1834 Russia withdrew.

During the revolutions in Europe in 1848, the national feeling in Moldova and Valakia was stimulated by the peasant revolts in the region. They reached the pinnacle of the protests in Blaj in May of that year, but they were beaten by Turkish-Russian troops who reintroduced the nobility’s constitution. The Russians remained for another 3 years. During the Crimean War the area was occupied by alternating Russian and Austrian troops. By the Treaty of Paris of 1856, the status of the area was confirmed by principals. The local delegates suggested that the principals should have autonomy under the name of Romania, that a foreign king should be elected, that an inheritance monarchy be established and that the country should be neutral. Despite the resistance of the Sultan, in August 1858 a reunion commission was set up.