In 2016, the country had an average population density of 210 residents per square kilometer, but the vast majority (95 percent) live on the island of São Tomé. In 2019, 68 percent of the population lived in urban areas, and the capital São Tomé (67 900 residents, 2012) is the completely dominant city. 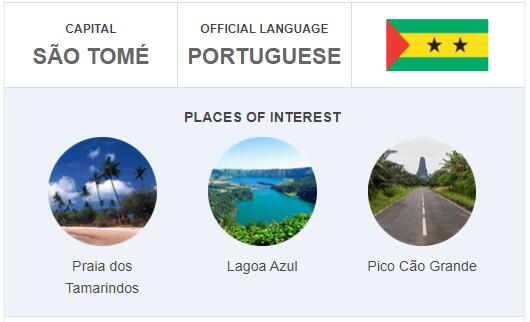 The official language is Portuguese. The majority of the population speak different variants of Portuguese-based Creole languages.

In São Tomé and Príncipe, today (2011) more than 80% are Catholics and just over 12% Protestants. The strong dominance of the Catholic Church is because Portuguese sailors in the 1470s came to these then uninhabited islands, which in 1522 became a Portuguese colony. The Catholic Church was established in the country in 1534. The first Protestant church was first established in 1935. The largest Protestant community today is Igreja Nova Apostolica (New Apostolic Church). It began operations in the country in 1980, and today 7% of the population are members of this church.

According to Countryaah, Islam is poorly represented in the country. Only 2% are expected to be Muslims, but their numbers are increasing due to Muslim immigrants from Nigeria and Cameroon. As in many other places in Africa, there are also, albeit to a small extent, syncretistic religious variants in which traditional African religion is mixed with Christian or Islamic beliefs and rites.

During the colonial period until independence from Portugal in 1975, the country’s constitution was the same as Portugal’s and thus had a Catholic base. Today’s constitution from 2003, on the other hand, is secular. It and other laws protect religious freedom.

Island state of West Africa. The population (137,599 residents at the 2001 census) lives mostly concentrated in the agricultural villages of the plantations or in small commercial centers, the only important center is the capital São Tomé. This small archipelago, considered one of the least developed countries in the world (over half of the population lives below the poverty line), bases its economy on agriculture and, in particular, on plantation crops (cocoa, which in 2004 assured 91% of income from exports, coffee and copra), while the rest is represented by fishing and processing activities of agricultural products. Tourism is only a marginal economic activity and the country is not yet able to exploit its natural potential. In 1998, the discovery of some oil fields on the continental shelf of São Tomé and Príncipe and of Nigeria sparked international interests in this small country. In 2000, a first agreement was signed with Nigeria for the joint exploitation of these resources. In 2005 the government presented the first budget in which income from oil appears, of which only a small part is destined for social projects, while the rest is used to repay a portion of the debts contracted with Nigeria and international organizations.