According to Countryaah, about 96 percent of Saudi Arabia’s population is Muslims. The majority are Sunni Muslims, but there is a Shiite minority of around 8 percent. This minority also has problems today with being accepted by the Sunni majority. The country’s approximately 1.5 percent Christians do not have citizenship and are without the right to churches and public religious practice.

The most influential religious institution is the state-sponsored Ulama Council. One of the Council’s foremost tasks is to provide religious justifications for the regime’s policies. The religious police, governed by the “Committee on the Promotion of Virtue and the Fight against Charges,” ensure that all rules of public morality are followed. Rules of social behavior (clothing, banning women driving, closing business during prayer times, etc.) are inspired by the Puritan Wahhabitter movement; the majority follow the strict Hanbali law school, the country’s official law school, a minority follow the shafi’i school. 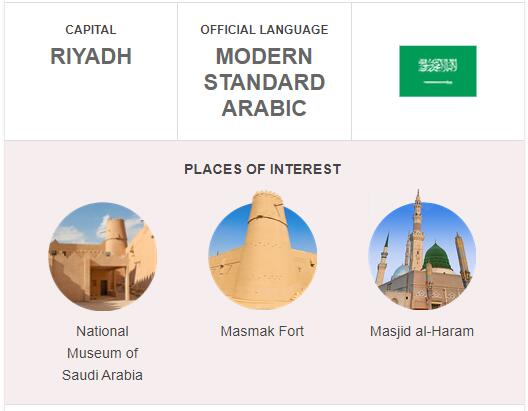 The rulers of the country have wanted to act as role models and leaders for the entire Muslim world. In 1986, King Fahd took the title “Guardian of the two shrines”, that is, Mecca and Medina, the two cities that can only be visited by Muslims. Ka’ba in Mecca is the cultic center of Islam. Millions of Muslims flock here during the annual pilgrimage (hajj). In Medina lies the Prophet Muhammad grave. Since 1960, Saudi Arabia has funded mosque buildings worldwide, conducted international relief efforts among Muslims, and helped found and fund international Islamic organizations, the foremost being the Muslim World League (Rabita al-alam al-islami) and the OIC (Organization of Islamic Conference, Arabic Munazzamat al-mu’tamar al-Islami), both headquartered in the country. From the 1990s, among other things, relations with the United States and the economic development of the country have promoted religious opposition.

Since 2013, an ever-stronger political axis between Israel and Saudi Arabia had developed, united in the fight against Iran, resistance to the US and EU dismantling of sanctions against Iran and normalization of relations with the country, as well as the desire to replace the Assad regime in the Damascus with Islamists. After the United States in September 2014 allegedly launched bombings of IS in Syria and Iraq – despite fierce protests from Saudi Arabia and Turkey in particular – Saudi Arabia began supplying heavier weapons to Syrian jihadists, including anti-tank weapons. Following Russia’s September 2015 bombing of IS, Saudi Arabia threatened to further reinforce weapons supplies and announced in February 2016 that it was ready to send troops into Syria to join the fighting. That same month, it sent the first F-16 aircraft to bases in Turkey, from which to attack Syrian military and Russian aircraft. Along with Turkey, the country speculated to create a military confrontation with Russia that could more decisively pull the United States into the war.

Saudi Arabia is showing a brutality IS can only dream of. The country started 2016 executing 47 people by decapitation. The Saudis called them terrorists, but there were Shia Muslims, including the country’s most important Shia imam Sheikh Nimr. The execution of the imam immediately sparked widespread protests against Saudi Arabia in Iran, with protesters storming the embassy. Saudi Arabia then severed diplomatic relations.

In February 2016, the European Parliament adopted a boycott of arms sales to Saudi Arabia. However, the boycott was not binding. European arms manufacturers with the British in the lead benefited from annual orders of several billion. US $. Despite significant protests in the UK, Prime Minister Cameron continued his work on British arms sales to the sheep. The reason for the European Parliament’s desire for a boycott was the widespread Saudi war crimes in Yemen.

In the same month, Denmark sent a trade delegation to Saudi Arabia led by Foreign Minister Kristian Jensen and the royal house. The visit marked the close connection between Denmark and the bloody dictatorship that had decapitated over the previous month. Denmark supplies weapons to the dictatorship’s bloody war in Yemen and the Minister of Foreign Affairs took the opportunity to declare that Denmark was against EU and international human rights organizations’ calls for arms boycott of dictatorship.