According to Countryaah, population growth in present-day Serbia changed radically from the mid-1970s to the early 1990s. Around 1975, the annual population increase was about 6 percent, which is a very high growth rate. Ten years later it was down to 2.5 percent and from 1992 onwards the population of Serbia has decreased. The death toll is significantly higher than the birth rate and the exchange of immigration with other countries gives no net contribution. The number of children is now small and the proportion of older people increases every year, especially in the countryside. From there, the youths move to the cities.

The largest ethnic group is Serbs, which in 2011 made up 83.3 percent of the population. Next are Hungarians (3.5 percent), who mainly live in northern Vojvodina, and Roma (2 percent), who live mainly near the border with Romania and farthest to the south. During the 1990s, about half a million refugees, mostly Serbs, came from other parts of former Yugoslavia, mainly from Croatia and Bosnia and Herzegovina. Some of them have been integrated and in 2011 it was estimated that in Serbia there are over 73,000 refugees from other countries. In addition, about 100,000 were displaced from Kosovo. In Serbia, they are regarded as internal refugees, since Kosovo is considered part of the country there. 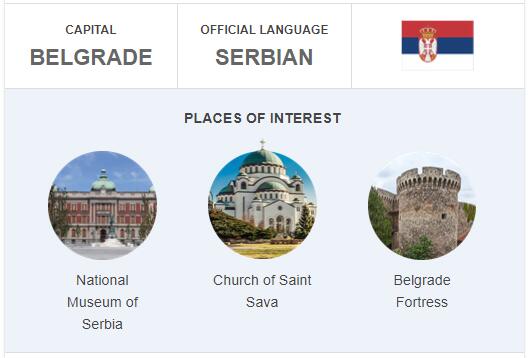 The official language is Serbian, which, like the Croatian, Montenegrin and Bosnian standard languages, is based on štokavian dialects. Languages ​​recognized as regional or minority languages according to the Council of Europe’s language statute are Hungarian, Albanian, Ukrainian, Bulgarian, Russian (Rutanese), Slovak, Croatian, Bosnian and Romani. Serbian is also recognized as a regional or minority language in Croatia, Hungary and Romania, is one of the three official languages in Bosnia and Herzegovina and may be used officially in Montenegro.

According to the 2011 census, 85 percent of the population belongs to the Orthodox churches, 5 percent are Catholics (especially in the northern parts of the country) and 3 percent are Muslims.

Serbia has freedom of religion but in practice, however, the Serbian Orthodox Church functions as something of a state church.