In 2019 Somalia had a population density of 24 residents per km2. According to Countryaah, about 50 percent of residents are nomadic. A settled population is normally found along the Shebeli and Juba rivers and in some areas of the northwest.

The country has a relatively low degree of urbanization for East Africa; In 2019, 45 percent of the population lived in cities. The dominant city is the capital Mogadishu (1.7 million residents, 2015). As a result of the civil war, it is estimated that 3/4 of the residents have left their normal living areas since 1991. A large number of Somalis have also moved the country as a result of the fighting. The drought of recent years has also driven hundreds of thousands of people from their homes.

Somalis make up about 85 percent of the country’s population. Somalis are divided into six large groups of clans, named after the man who is considered to be the ancestor of the various clans in each group. These groups are dir, mainly living in the northwest, Ishaaq, who inhabit northern Somalia’s central areas, Hawiye, who reside in the central parts and Shabeeleflodens valley. Daarood is the most widely distributed group of clans on the surface. They are found in the northeastern parts of the country as well as south of the Juba River. The greatest dialectal difference is that of the two closely related groups of digil and rahanweyn, which inhabit the area between the two rivers.

The clan and the clan community are central to Somali political and social life. Although Somalia is often regarded as ethnically, religiously and linguistically homogeneous, it is mainly towards the clan kin that a Somali is solidarity. By counting the lineage of the ancestry, every Somali can place himself in the network of obligations and rights that clan membership entails. Above all, this includes the collective payment of blood money (diya).

In addition to the six large groups of clans, all of whom ultimately believe to have a common origin, Somalia is also inhabited by several bantu-speaking groups, including zigula and gosha (shambara), mainly in the valley of the Juba river. There they feed on agriculture. These groups are said to be descendants of slaves from eastern Africa. However, many of them have been forced to leave their homes because of persecution, and in 2004 several were transferred to the United States. Other Bantu people live in the coastal areas. Prior to the Civil War, many of the cities had residents of Persian and Arab immigrants.

As a source of supply, old nomadic livestock management of camels, cattle, goats and sheep dominates. Livestock caregivers are estimated at 60 percent of the population. Extensive cultivations of millet and maize, for example, are mainly concentrated in the river valleys and the area between the rivers. As a result of prolonged political instability and war, over a million people live as internally displaced people in the country, and a large number have left Somalia. 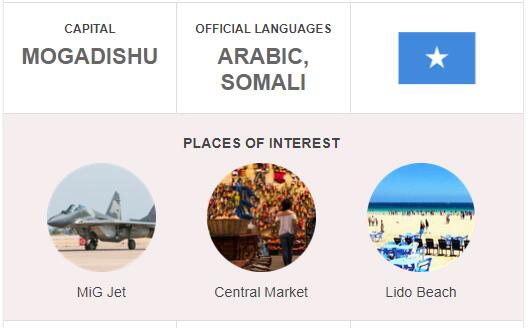 Somalia is very uniformly linguistic. Somali dominates completely and has been official language since 1973. Italian, English and Arabic are also spoken by many. Small groups speak the Cushitic oromo and boni as well as a few bantu languages.

Islam is the official religion. Practically the entire population (1999) is Muslim, almost all Sunnis. Shafi’ite law school dominates. Sufism has a very strong position, and Qadiriya is probably the largest of the order. The Siyad Barre regime’s Equal Rights Act for Women and Men 1975 was strongly criticized by Muslim leaders; in practice, the old inheritance rules continue to apply. Some Islamist organizations have had some successes, but the demands for increased political significance for Islam are countered by many who want to separate religious influence from secular power.