In 2019, South Africa was estimated to have a population density of 48 residents per square kilometer, with large concentrations around Johannesburg and Pretoria as well as on the eastern and southern coastal areas. Since the 1980s, South Africa has undergone rapid urbanization with increasing decline. In 2019, 66 percent of the population was estimated to live in cities. Immigration to the country’s metropolitan regions is very strong; In 2011, Pretoria – Witwatersrand (including Johannesburg) –Vereeniging had 8.1 million residents, Cape Town’s metropolitan region 5.1 million and Durban – Pinetown – Pietermaritzburg 3.5 million.

For information on life expectancy and other demographic statistics, see Abbreviationfinder.

According to Countryaah, South Africa’s population can be linguistically and culturally divided into Europeans (9 percent, African speakers and English speakers), Asians (2.6 percent, predominantly Indians), Africans (79 percent, mainly Nantu and Sotho groups, but also Khoisan people from San and Khoikhoi) mixed communities with a strong element of khoikhoi, which by South Africans are called colored (8.8%). The peoples that existed in the present South Africa’s territory when Europeans (Dutch) began to settle there in the 17th century were Khoisan people and Bantu people.

Khoikhoi inhabited the Cape area, where they conducted livestock management (fat-tailed sheep) and lived in communities of 200–300 residents within the framework of loose clans federations. Today, South African khoikhoi have been partially eradicated (only a few individuals still speak Koran and xiri, which are still Khoikhoi languages) in South Africa, partially absorbed by other groups, with which they form a mixed category of colored. Khoikhoi is considered to have its roots in the San population, which until the end of the 1980s were found as ambitious hunters and collectors in so-called bands of 40-60 people in the Kalahari desert. The San people today are estimated at between 4,500 and 10,000.

South Africa’s bantu population is divided into a few main groups, namely the nguni people (27 million; zulu, xhosa, mpondo, ndebele, swazi and others), the sotho-tswana group (14 million; sotho, pedi, lovedu and others), vhavenda (venda, 1 million) and vhalemba (70,000). The Bantu people, who in various waves penetrated the south from the first millennium of our era, originally came from central and eastern Africa and introduced large-scale forest management, simpler agricultural technology (hand chopping) and a sophisticated social and political organization, which was partly built on patrilineal clans (compare patrilineal descent), partly on a military-stressed age class system. Some of the Bantu people in South Africa developed this system into an effective military organization and formed the kingdom with an intricate court ceremony and royal ancestral cult designed to guarantee fertility within the kingdom.

In particular, the military political organization has characterized the Nguni people, with Zulu as the prime example of an effective war people. The Nguni people, whose settlement patterns are characterized by outwardly sharpened, rounded “beads” (livestock fences), place more importance on livestock management than the more agricultural and historically more peaceful Sotho people. In the last century, the socio-political structure has changed, partly because of increased dependence on men’s wage work in cities and mines, and also through the modern decades and changed political situation. South African Bantu people have largely embraced Christianity formally, while developing a variety of syncretistic churches with strong elements of traditional symbols. 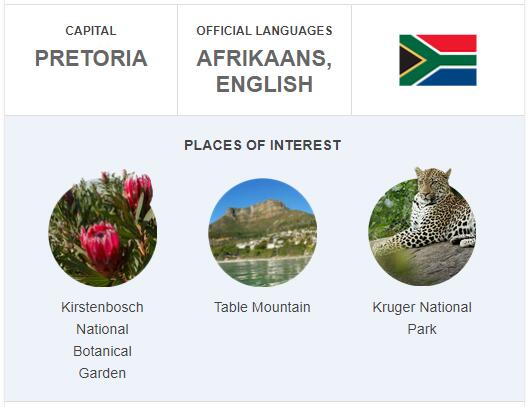 Afrikaans, which was developed from the Dutch spoken by the early immigrants, is the mother tongue of about 13% of the population. Apart from a large part of the white population, it is spoken by the so-called colored people, especially in the Western Cape Province. English is the native language of just over 3.5 million (8%) of different ethnic origins, but is also widely used as an interpersonal language.

A number of Indian languages, such as Tamil, Hindi and Gujarati, are spoken by the Indian population in mainly KwaZulu/Natal province.

Official languages ​​are the nine bantu languages ​​listed above as well as English and Afrikaans.

Language conflicts have played a not insignificant role in South Africa’s history. Attempts to introduce compulsory education in Afrikaans were a trigger in connection with the unrest in Soweto in 1976.

Today, Christians account for just over 80% of South Africa’s population. The Christian communities that have the most members are the over 4,000 small indigenous African churches. It is estimated that two-fifths of the population belong to these, which are characterized by a synthesis between Christianity and African religions and often have a charismatic character (compare charismatic movement). In the past, these churches were considered Ethiopian, but nowadays they are defined as Zionist or Apostolic. The largest of these is The Zionist Christian Church, whose membership is estimated at more than four million. In the northern parts of KwaZulu/Natal and Mpumalanga, these churches serve more than half the population, and in Soweto it is estimated that there are at least 900 African independent churches.

Christianity came to South Africa with Portuguese traders. The Catholic Church was established as early as 1501, but today counts just over 5% of the population as members. With the colonization of the Dutch (see further history) the Reformed church was established in 1652. Today (2010) these are slightly fewer than the Catholics, ie. one-twentieth. During the apartheid era, the Dutch Reformed Church was closely allied with the regime. Particularly from the 1980s, however, more and more of the reformers joined the resistance movement, which included several church leaders, among others. Desmond Tutu.

There are other smaller Christian groups in the country, including Anglicans, Methodists, Orthodox and Seventh-day Adventists. In addition, there are Scientologists, Jews, Hindus and Muslims (of Asian origin). Data on the number of people who primarily encompass traditional African indigenous religion vary, but can be estimated at around 5% of the population.

Religious organizations play a major role in the fight against poverty and HIV/AIDS as well as supporting local development in eg. water supply, infrastructure and education.

The 1996 Constitution has a neutral religious foundation. It and other laws guarantee religious freedom.

Of South Africa’s national holidays, it is only Good Friday and Christmas Day that have religious characteristics.