Since early times – during the Vedas – the island of Ceylon was repeatedly invaded by Singaporeans, Indo-Europeans and Tamils, who laid the groundwork for advanced civilizations. When the Portuguese arrived in the island in 1505, it was divided into 7 kingdoms.

According to Countryaah, a century and a half later, the Dutch displaced the Portuguese from the sites they had built on the coast. In 1796, the British made the island their colony, after first subjugating neighboring India, but it was not until 1815 that they succeeded in crushing the resistance of the last local kingdom. The British introduced export crops such as coffee and tea intended for human consumption in Europe. 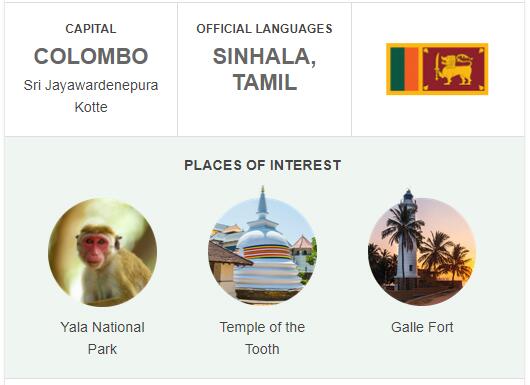 In the first half of the 20th century, a strong nationalist movement developed in the country, and in 1948 it gained independence within the framework of British state society, the Commonwealth.

Under the leadership of Sir John Kotelawala and Prime Minister SWRD Bandaranaike, the country developed an active and anti-colonialist foreign policy. In August 1954, Bandaranaike met in the capital Colombo with Nehru from India, Mohamed Ali from Pakistan, U Nu from Myanmar (Burma) and Sastroamidjojo from Indonesia. It became a groundbreaking meeting where it was decided to conduct a summit for the African and Asian countries the following year in Bandung, Indonesia. It became the forerunner of the Alliance Free Lands Movement.

Throughout the 1950s, the Tamil minority carried out a series of uprisings and in 1959 the Prime Minister was assassinated. His widow, Sirimavo Bandaranaike, succeeded in leading the Sri Lankan Freedom Party’s ruling party to the 1960 elections, despite having no prior political experience.

Bandaranaike thus became the first woman in the world to hold the post of head of government. She ruled in a coalition with the Communist Party and Trotskyists, and in 1962 nationalized the oil industry and several North American companies. In the 1965 election, she was beaten by a right-wing coalition, but she again won the election in 1970.

She was confronted with a guerrilla rebellion that defined herself as inspired by Che Guevara, but which she managed to stifle – with some hard-hitting means. At the same time, she continued the country’s anti-imperialist policy and in 1972 proclaimed the Republic of Sri Lanka. The last links with British colonial power were thus broken.

Bandaranaike implemented an agricultural reform that nationalized the tea plantations controlled by British companies, but that did not significantly change the living conditions of the farmers.

The conflict between the Sinhalese majority and the Tamil minority (descendants of the Dravids in southern India) had characterized almost the entire country’s history, and now continued under independence as well. The Sinhalese make up 83% of the country’s population while the Tamils ​​make up 9%. They are subdivided into “Sri Lankan Tamils” and “Indian Tamils”. The first group arrived on the island 2,000 years ago, and live predominantly in the north and east. The second group is immigrated later. The two groups have common ethnic traits, require regional autonomy and, for some, the formation of a truly Tamil state. The Tamil United Liberation Front (TAMF) was formed on May 4, 1972 by a merger of 3 Tamil parties: Federal Party, Tamil Congress and Ceylon Workers Congress.

In 1976, Bandaranaike hosted the Alliance Peace Summit in Colombo, and was elected president of the movement. Still, the difficult economic situation, accusations of nepotism and press censorship, as well as the state of emergency that had been in effect since 1971, led the opposition to win the July 1977 election.

The United National Party (UNP) led by Junius Jayewardene gained a large majority in parliament, followed by the Tamil Liberation Front. Despite its “socialist” orientation, the new prime minister opened the country to the multinational capital.

Following a constitutional reform in 1978, the Jayewards took over the post of the country’s president. In November 1980, an economic crisis program with drastic consequences for the population was launched in agreement with the IMF.

In October, Bandaranaike was thrown out of parliament. The former prime minister was deprived of her political rights for a seven-year term after a presidential commission found her guilty of “abuse of power” during her 1970-77 reign.