In 2019, Suriname had a population density of 4 residents per km2. The majority of the population is in the coastal region, with strong concentration around the capital and the lower course of the Suriname River. About 66 percent of the population lives in the cities, of which Paramaribo is the most dominant.

According to Countryaah, Suriname’s indigenous population, in 2007, accounted for 3.7 percent of the population, a total of just over 18,000. akuriyo, arawak, kaliña, trío (tiriyó) and wayana. These, along with the maroons, live along the larger inland rivers. They live on burning, hunting and fishing.

Today, the maroons make up 15 percent of the population. Asian groups, such as descendants of Indians and Pakistanis (27 percent) and Indonesians (15 percent), make up the rural population along the coast and estuaries, while Europeans are found in cities. The dominant ethnic unit is the Creole (30 percent), a mix of blacks, Europeans and Asians. Of these, 18 percent speak sranan, a local Creole language. 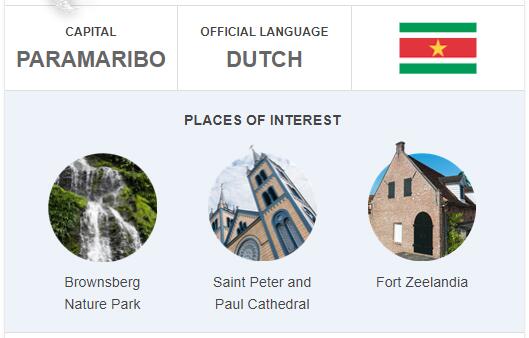 Dutch is an official language but is the mother tongue of only a small part of the population. Most people in Suriname understand and use sranan, an English-based Creole language. Otherwise, Hindi is spoken in a local form called sarnami (about 25% of the population) and Javanese (15%) and the Creole languages ​​Ndjuka and saramaccan (each 5%), the latter mixed English- and Portuguese-based. In addition, smaller groups still use arawak and carib language.

The dominant belief is Dutch colonial Protestantism with Calvinist orientation. The Ecumenical Church Community Council of Churches supported the independence movement in 1975. There are reformers, Presbyterians, Methodists and Baptists. About 20% are Catholics. Jews, Hindus and Indonesian Muslims came through later immigration. Ecumenism is most noticeable in social work against poverty and marginalization. A mixture of Afro and indigenous religious movements is strong, e.g. Winti. Interreligious dialogue between these and the Christians is increasing.