Between 633 and 640, the Byzantine province of Syria was incorporated into the Arab-Muslim empire. Damascus took over Medina’s role as the Arab kingdom’s political and administrative center and Umayyad dynasty caliphs had seat in the city from 661 to 749. Damascus was an important center of intellectual, religious and artistic activities, and Umayyad Mosque, which was completed in 715, is known as one of the world’s oldest, most beautiful and largest mosques.

According to Countryaah, the majority of Syrians are Sunni Muslims, probably just over 70 percent. All figures are uncertain, and there are no reliable religious statistics of recent times. A Shiite minority (Twelve School, about 0.7 percent) lives in Aleppo and Damascus, where there are Shi’ite sanctuaries that draw pilgrims from around the world in peacetime. In addition, there are three religious minorities with roots in Islam: the Alawites (about 12 percent) have a privileged position in that the country’s president Bashar al-Assad and large parts of the power elite belong to this group; the Drusians (about 3 percent) preferably live in the province of Suwayda in the southeast; Ishmaelites (about 0.5 percent) traditionally has its center in the city of Salamieh, near Hama and Homs. 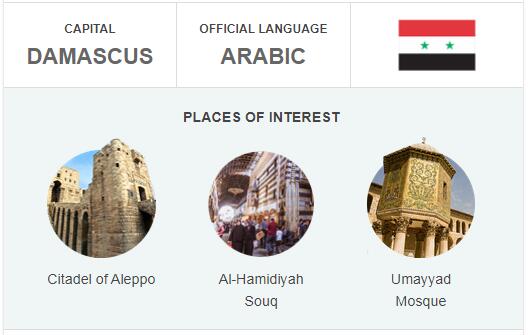 Syria is the only Arab-majority Arab country where Islam is not state religion. However, the country was given a new constitution in 2012 which states that the country’s president must be Muslim and that Sunni Islamic jurisprudence (fiqh) is a main source of the country’s laws. Religious legislation is followed in matters of private law (marriage, divorce, child distribution after divorce, as well as succession). That is, each religious community practices its own private law; Christian churches, Drusters, Shia Muslims and so on have their own courts and judges. The majority religion, Sunni Islam, has an official representative of the country’s great Mufti who, during the Assad regime, belonged to the naqshbandi fraternity.

In 1920, under the French Protectorate, about 30 percent of the population was Christian; in 1990, the number of Christians was reduced to around 10 percent. Immigration and low birth rates have led to steadily declining numbers, and after the start of the civil war in 2011, perhaps more than half of all Christians have left Syria. Acts of war have also greatly affected churches and monasteries, and in the Christian villages of Sednaya and Maaloula, churches from early Christian times have been laid in gravel.

The Greek Orthodox Church dominates numbers and has its patriarchy in Damascus. The Greek Catholic (Melkite) and Syrian Orthodox Church also have their own patriarchy in the capital. The Armenian Orthodox and the Maronite Church have small congregations; Protestant churches are poorly represented. The Jewish minority, which flourished at the turn of the 20th century, emigrated in the 1990s and is today reduced to tens of individuals. The number of Syrian jazids is unknown today.

The Astana peace process continued in March and May. The immediate result was the establishment of so-called de-escalation zones in various parts of the country, which had otherwise been characterized by fierce fighting. The largest of these included the rebel-controlled Idlib province, Hama, Aleppo and Latakia provinces. Three additional zones were established in the rebel-controlled northern part of Homs, eastern Ghouta and along the Jordan border.

In a desperate attempt to derail the peace process, in early April, the United States attacked a Syrian air base with 59 cruise missiles. Some missiles were shot down and the rest caused only limited damage. The attack was legitimized by the fact that Syria had allegedly attacked the city of Khan Sheikhun in the rebel-controlled Idlib with chemical weapons a few days before, killing over 80 people. A claim rejected by both the Syrian regime and Russia, but swallowed raw in the Western world, where weapons of mass destructionhistorically had been a good cellar. The United Nations Chemical Weapons Monitoring Unit doubted the claim, which was not immediately proven. Part of the backdrop to the US attack may also have been that a few days before, the superpower had attacked a house in Mosul, Iraq, killing over 200 civilians. The war crime was to be drowned in another news.

US strongly unpopular President Trump noted that the military attack received support – even from his worst opponents. A few days later, his military therefore threw the largest non-nuclear bomb on Afghanistan so far. A media stunt intended to strengthen the president’s support. In late June, the United States Air Force shot down a Syrian aircraft on the outskirts of the IS-occupied Raqqa and subsequently claimed it had attacked US-backed SDF forces that had surrounded Raqqa. A claim that was not confirmed by the SDF. The downturn led to fierce protests from Syria, and as in April, Russia interrupted military cooperation with the United States in Syria to prevent conflict between the two countries’ air force.

As a prelude to new negotiations in Astana in mid-July, Russia ceased its military operations in the country at the beginning of the month, and at a meeting between Putin and Trump on July 7, the United States also agreed to cease its military operations in the country. The conflict then focused almost exclusively on fighting IS in Raqqa. Despite fierce Turkish protests, the US agreed in April to deliver heavier weapons to the Kurdish-dominated SDF army, which is to fight IS on the ground.

After ½ years of bloody fighting, SDF (predominantly YPG / YPJ partisans) conquered Raqqa in October 2017. The “Caliphate” of the IS Caliphate was wiped out and with the Iraqi forces’ conquest of Mosul in Iraq a few months earlier, the movement no longer held any strategic cities, but was sent into the desert, severely weakened. As in Mosul, it was the foreign fighters of the movement who were the last to remain, and most Western countries prayed that they would be killed. French Defense Minister Florence Parly made it very clear to French TV station Europe 1 at the beginning of the month: “If they (the partisans) succumb to the fighting, then it’s the best”. Although there were indeed many people killed, there were also escapes in the convoys, agreements were reached in the final phase of the fighting.

With the almost total victory over IS in Iraq and Syria, it was time again to swap allies in the conflict. Due. The United States’ support for the Kurds had for a year been allied with Russia and Iran to support the jihadists in the Idlib province bordering Turkey. The US now ceased its weapons assistance to the Kurds in order to get Turkey back on its side. The alliance shift revealed the Syrian Kurds’ big problem. Although it was largely their understanding that IS had been defeated in northern Syria, they no longer had any powerful allies to rescue them from Turkey or the Syrian central government. In Iraq, the Kurds had tried to proclaim a Kurdish state, but had been run over and defeated by the Iraqi central government when no one supported this project. (Foreigners who joined Daesh faced almost certain death in Raqqa, Daily News 21/10 2017; Russia resembles US coalition bombing of Raqqa to WWII Dresden, Daily News 22/10 2017; The fall of Raqqa – in pictures, Guardian 21/10 2017)

In frustration over the Kurdish-led crackdown on Turkey’s allies in Syria, IS Turkey launched war on Rojava – Kurdistan in northern Syria in January 2018. The regime in Ankara had for several years labeled the Syrian Kurds as terrorists and had occupied parts of northern Syria since August 2016. Before Turkey began the war, the Turkish Minister of War visited Moscow to ensure that the Turks were not attacked by Russian aircraft. Russia agreed not to intervene. Both countries used the situation against the United States. Russia wanted to weaken the US-Turkey alliance, and Turkey wanted to mark political and military opposition to the US tactical alliance with the Kurds. From the latter half of January, Turkey daily attacked targets in western Rojava (Afrin) with aircraft and artillery. Syria protested to the Islamist regime in Ankara and sent some units to Afrin, but otherwise the Kurdish YPG/YPJ militia faced the overwhelming Turkish armed forces alone. The Turkish attacks cost several thousand Kurdish civilians, and by mid-March had sent around 200,000 Kurds to flight. They naturally did not want to flee to Turkey, but instead sought Aleppo. In mid-February, there were reports of Turkish use of chemical weapons against the civilian population. The Turkish war crimes and the humanitarian catastrophe that unfolded were largely unreported in the Western media, which instead worried about the Assad regime’s attack on Ghouta’s Islamist militias on the outskirts of Damascus. In mid-March, Afrin succumbed to Turkish force majeure, the occupying power hoisted the Turkish flag over the city and the YPG/YPJ then declared that it was going to guerrilla attack on the occupying power.