In 2000-08, the population increased by an average of 1 percent per year, but since then the rate of increase has decreased. In 2010, there were 144,000 Burmese in nine refugee camps near the border in the west and another 2 million Burmese are believed to be in Thailand, most illegally. In addition, there are several hundreds of thousands of guest workers and illegal immigrants from other neighboring countries. In northern Thailand, for generations, about 1 million “mountain people” live, ie. ethnic minorities.

According to Countryaah, Thailand is one of Southeast Asia’s least urbanized countries; almost 50 percent still live in the countryside. The most dominant city is Bangkok with 5.7 million residents in the city itself and 8.25 million in the metropolitan area (2015). Next largest are the million cities of Samut Prakan and Nonthaburi, both suburbs of Bangkok. The largest in other parts of the country is Chiang Mai at the top of the northwest.

Despite the linguistic homogeneity, there are significant regional and intercultural variations among the Thai population, which are sometimes expressed as regional special interests. In northeastern Thailand, Isan, the population calls itself Lao Isan and is considered to have a Laotian background for historical reasons. Northern Thailand, with Chiang Mai as its center, is similarly a region with its own cultural and linguistic identity. Regionally, however, northern Thailand is characterized by the presence of a large number of minorities, including various mountain people. In the southern part of Thailand there is a significant group of Malays, who are often Sunni Muslims and constitute about 4.5 percent of the population. In the northernmost part of the country there is also a group of Chinese Muslims.

The rapid economic development has also contributed to increasing urbanization. The Chinese, who account for 14 percent of the population, are a largely urban group and form a well-integrated part of the population. They are to a large extent linked to various activities within commerce and banking and finance. The division of the peoples into two main groups on the basis of supply strategies and socio-political organization that applies to other parts of Southeast Asia applies to some extent to Thailand. The lowland peoples, for whom wetland farming has traditionally played a major role in providing livelihoods and who support a state-bearing civilization in which Buddhism and monarchy are important elements, are largely the Thai majority.

Other peoples, especially the mountain peoples in the nation’s highland border areas against Burma and Laos, differ from the lowland peoples in many respects. Tradition in various forms has traditionally been a dominant element in the livelihood, often in combination with a social organization built around the family and its clans and with ancestral focus and shamanism as important elements in religious orientation. Modern forestry and increased awareness of the need for ecological balance may not always be associated with the peoples’ sweat use. This has meant that many mountain people have gained an increasingly complex economy, where labor migration, aid and not least tourism have increased in importance.

In this perspective, the migrant Hmong people, who have their clan members scattered throughout much of the world, appear to be an extremely “global group” in which the consciousness of family affiliation is an important element, as is the absence of territorial or local anchoring. As a result of political instability, several mountain people have migrated to Thailand from other areas of Burma, Laos and southern China. This includes the Tibetan Burmese people Lisu, Lahu and Akha, as well as the Hmong-speaking peoples Hmong and Yao. In northeastern Thailand there are local groups of Khmer people, while in central as well as in northern Thailand there are groups of monk-Khmer speaking monks. A numerically significant group is the Kareen, who live in the border country between Burma and Thailand and whose number is estimated to be about 3 million.

The indigenous population includes the monkhum-speaking lawa (lua) in northern Thailand; a disappearing few mlabri (about 300), which provide for hunting and gathering, are still found in the forest areas of northeastern Thailand. The minority people also usually count some Thai people, such as Shan in northern Thailand, as well as other Thai people groups who have migrated to Thailand from China, Laos and Vietnam. 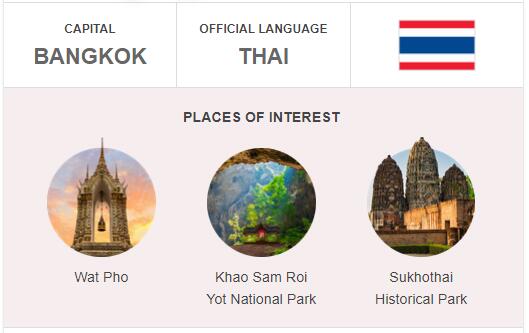 The official language is Thai. It is spoken as the mother tongue of over 80% of the population. The four main dialects Central Thai, North Thai, South Thai and Northeast Thai were previously written with different alphabets, but now almost exclusively Central Thai, which is taught in schools throughout the country. Northeast Thai is the same language as Lao, the main language of Laos.

The largest minority group is 4-5 million Chinese, which are often bilingual with Chinese and Thai. In the far south, Malay is spoken, and at the border with Cambodia, Khmer is spoken, each of over 1 million. The mountain people in the north speak different Tibetan Burmese languages, Mon-Khmer languages and Hmong-Mini languages. Some minority languages are used as a school language in lower education.

In Thailand, over 85% of the population professes to Buddhism. The dominant variant of Buddhism in the country is theravada, which came to the country in the twentieth century BC

The Buddhist clergy (sangha) are divided into the two schools Maha Nikaya and Dhammayuttika Nikaya. Maha Nikaya is the oldest of these and the dominant school in the monastic system. The Dhammayutika emerged in the 19th century as a more orthodox reform movement led by King Mongkut (Rama IV).

Almost 6% of Thais are Muslims. Islam was established with the Ayutthaya dynasty (1350-1767) and today dominates four of the country’s five southern provinces bordering Malaysia. Virtually all of the country’s mosques are linked to Shia.

More than 2% of the population is said to confess to traditional indigenous religions, which often consist of a mixture of Buddhism, Christianity, Daoism and religious belief.

Christians make up just over one percent of the population. Of the Christian communities, the Catholic Church is the oldest and largest. Its history in the country dates from Portuguese contacts in the 16th century. Protestant mission began in the 19th century in Bangkok.

According to the constitution, Thailand is a kingdom without state religion where full religious freedom prevails. However, Buddhism has a special position. The king is supposed to be a Buddhist, but he must protect all religions. The government makes financial contributions to the five recognized religions Buddhism, Islam, Hinduism, Sikhism and Christianity.

Despite freedom of constitutional freedom of speech, it is forbidden to insult Buddhism or any other religion, which can give up to one year in prison. It is also punishable to interfere with the worship services of the state recognized religions or in various ways profane their sacred places.

The National Buddhist Office reviews the Buddhist priesthood and approves the teaching of Buddhism given in temples and schools and contributes financially to teaching material that deals with Buddhism in daily life. The state also provides financial support to activities that improve the relationships between different religious groups in the country’s southern provinces.

The government also provides financial assistance to Muslims who want to pilgrimage to Mecca, to the restoration of Buddhist and non-Buddhist worship facilities, to Buddhist and Islamic schools, and to Buddhist monks and Islamic priests for civil service missions and medical travel trips.

Religious education is compulsory in primary and secondary school, and provides information on the five recognized religions.

In three provinces: Pattani, Yala, and Narathiwa as well as in five districts in southern Thailand, the majority of the population are ethnic Malays. The region was an independent Sultanate until 1902, when it was annexed by Thailand (then Siam). Since the annexation, there has been a struggle for the area to once again become its own nation. The conflict has escalated since the early 2000s when the separatist movement began to cooperate with militant Islamist groups in the region. Attacks have been directed primarily at Thai police and military, but also Buddhist temples and schools. The conflict has led to a spiral of violence with retaliation and human rights violations.

In Thailand, the following religious holidays are national holidays: Songkran is the Buddhist New Year that usually falls in April. It is also called the water festival. Then the statues are washed in the temples and people splash water on each other. The most important festival is Visakha Puja (Vesak festival) in May for Buddha’s birth, enlightenment and attainment of nirvana. In July, the three-month Buddhist fast, Khao Phansa, begins when monks retreat to the monasteries. The fast ends with a festival. Magha Puja in February celebrates Buddha’s sermon to enlightened monks with light processions in the temples.