According to Countryaah, Togo’s population is divided into some 40 ethnic groups. Socially, culturally and politically, the country is divided between the densely populated and fertile south and the sparsely populated, dry savannah areas of the central and northern parts.

In the south, Kwa-speaking peoples, among whom are marked ewe (1.3 million), wachi (641,000) and mine (363,000). Ewe and mine are mostly Christian, while wachi has predominantly maintained its indigenous religion. They feed on tropical hay farming with root vegetables such as base crops; there is also some plantation operation.

The central and northern parts of the country are populated by a number of belt-talking people, including kabyé (878,000), temba (359,000), losso (256,000) and mob (333,000). Most people practice indigenous religions, but Islam is constantly gaining more followers, mainly among temba. The supply is based on hacking farms with millet and sorghum as base crops, often in combination with some livestock management. In the central parts of the country there are also 90,000 yoruba. 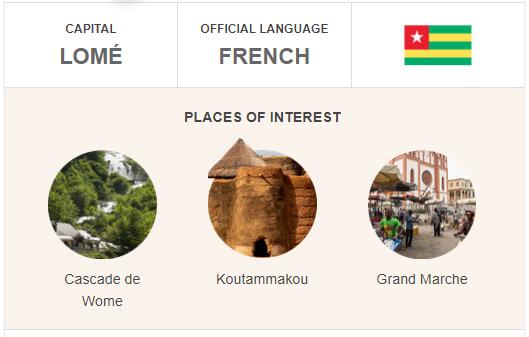 The official language is French. The vernacular belongs to the Niger-Congo family. In the north, Gurs are spoken, and in the South Kwa languages; the most important of these is ewe.

The part of Africa that today includes Togo was already reached in the 15th century by European seafarers and slave traders. A German Catholic mission station was established in Togo in the 1840s. Today, almost half of the population is Christian, and they live mainly in the southern parts of the country. Among the Christian communities, the Catholic Church is the largest with nearly 30% of its population as members. Just over 13% are Protestants. There are also fifteen independent pentacostal, charismatic or apostolic communities in the country. Altogether, they comprise just over 6% of the population. By far the largest among these is the Assemblées de Dieu (‘Assembly of God’) established in the country in 1921. Of the country’s population, one-third is estimated to practice traditional African religion, including characterized by animism and ancestral cult. Many people mix Christian faith with indigenous traditional religion.

The Constitution and other laws guarantee freedom of religion. The country has no real state religion, but Christians and Muslims are automatically recognized by the government. Other religious groups must apply for registration to receive the same status as Christianity and Islam. According to the constitution, it is prohibited to form political parties that are ethnically or religiously based. Also, it is not allowed to discuss politics in the religious programs broadcast by radio and television stations. There is no religious education in the public school, but there are many Catholic, Protestant and Islamic schools in the country. The government provides these schools with staff and pays their salaries. It is common for different religious groups to invite each other to their ceremonies. Similarly, marriages across religious boundaries are common.