According to Countryaah, Turkmenistan has a population density of 12 residents per km2, but the population is concentrated to the western parts and areas around the Karakum Canal and Amu-Darja. 52 percent of the population live in cities, the largest of which is the capital Ashgabat (1 million residents, 2012), Chardzhou (408,900) and Tasjauz (275,300).

The ethnic composition of the population has changed dramatically since independence. According to official estimates, the Turkmen made up 91 percent, the Uzbek 3 percent and the Russians 2 percent of the population. In actual terms, this means that the Turkmen have doubled since 1989 to amount to 4.9 million, while the Russians have reduced by two-thirds and amount to just under 100,000. The division of Turkmen into tribes, which are divided into clans, is still significant and existed even in the collective organized by the Soviet authorities.

The traditional Turkmen culture was based on a nomadic economy with, among other things, caracal sheep and camel and horse breeding, but the transition to agriculture began as early as the 18th century, and it was early to distinguish between peasant and shepherd Turkmenistan. The dwellings were also among the peasants of herbs, which in their places are still used. In the cities, the Turkmen were often artisans and known for their silver forging. The carpet weave stood tall (see Turkmenistan rugs). The men still wear tall, black caps of karakul leather, the women, who had a free position and were able to attain significant positions in society, had plenty of silver jewelry. The oral saga and song tradition has been preserved in our time. 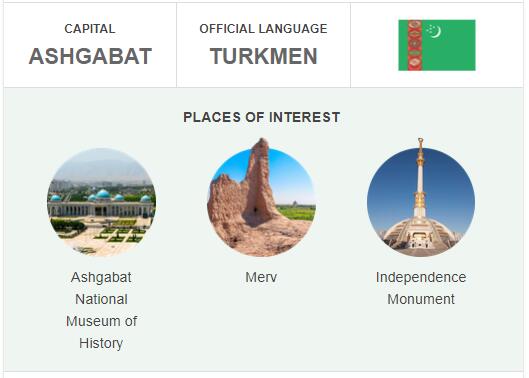 The official language is Turkmenistan, spoken by 3.8 million. Other languages ​​are also spoken, such as Russian, Uzbek, Kazakh, Tatar, Ukrainian and Azerbaijani.

In Turkmenistan, freedom of religion is guaranteed by the Constitution. The majority of the population are Sunni Muslims. Along the border with Iran there are minorities of Shi’ite Muslims. In the cities there are smaller Christian minorities. The largest church is the Russian Orthodox. Obsolete statistics indicate that 9% of the population is Christian, but in recent years emigration of Russians has reduced the proportion. There are 13 Russian Orthodox churches in the country, under the auspices of the Archbishop of Tashkent. The country’s Armenians have not been allowed to re-establish their churches. The small Jewish minority lacks synagogues.

Both Muslims and religious minorities have been subject to harassment by the current regime. Sufiordnar has traditionally played an important role in Turkmen Islam and the practice of religion is characterized by developed life-cycle rituals and pilgrimages with elements of dance and music. Mosques and Muslim leaders are funded by the state, which also controls them strongly. In 2003, the country’s mufti Nasrullah Ibn Ibadullah (born 1947) was deposed and sentenced in secret trials to long-term imprisonment. The Islamic feasts oraza bayram (Id al-fitr) and the sacrificial feast gurban bayram(Id al-adha) is celebrated as official holidays. Around former President Saparmurat Nijazov, not only did he develop a personal cult, but he also stood for an ideology with strong religious characteristics. His book Rukhnama (‘The Book of the Soul’) was launched as a complement to the Qur’an and other religious records, made compulsory for all school students, and offered in mosques and churches.

Turkmenistan is a Central Asian state, bordered to the North with Kazakhstan, to the NE with Uzbekistan, to the South with Iran and Afghanistan, and to the West with the Caspian Sea.

Most of the territory is occupied by a vast plateau, which to the NE slopes down towards the plain of the Amudar′ja, the main watercourse of the country, for long navigable stretches, which flows into the Aral Sea, while to the SE and SW is limited by the mountain ranges of Kuogitang (which includes Mount Airybaba, 3137 m, the highest peak of the Turkmenistan) and Kopet Dag. On the western side, the Kopet Dag chain slopes towards the coast of the Caspian Sea, which, in the part that goes up to Türkmenbaši, is low and sandy, and then becomes jagged in the stretch that connects the port city to the vast Kara Bogaz Gol salt lake separated from the Caspian Sea by a dam. The central part of the Turkmenistan is almost entirely occupied by the Karakumy desert, characterized by the presence of large depressions (takyr), by dunes and barges in the western section, by dejection cones and aeolian deposits at the southern limit.

The climate is continental, with strong seasonal temperature variations and low rainfall (100-200 mm per year). Only on the reliefs 400 mm per year are reached.