In 2019, Uganda had a population density of 181 residents per km2. Most of the population lives in the rich agricultural areas north of Lake Victoria, while the northeastern parts are sparsely populated, with nomadic herdsmen.

According to Countryaah, about 24 percent of the population lives in cities, the largest of which are Kampala (1.7 million residents, 2016), Mbarara (202,800), Gulu (161,200). The demographic situation is strongly affected by the large number of refugees from Sudan and Rwanda and by the widespread AIDS epidemic.

The area between the Central African lakes has long been a meeting place for different peoples. The early Bantu expansion from the west and later immigration of other peoples from the north created a dynamic in the area that early led to the formation of complex societal formations.

Uganda’s population today consists of more than 40 ethnic groups, which are usually divided by language. In the northern part of the country, groups that speak Nilo-Saharan languages, predominantly by the Nilotic branch. In other parts of the country, diet-speaking groups dominate; about 65 percent of the population is made up of bantu people. The largest bantu groups are ganda (7.5 million) in central Uganda, nyoro (884,000) in western Uganda, nkole (188,000) in southern Uganda and soga (2.7 million) in eastern Uganda. Among the nilotic groups, teso (1.7 million), langi (2 million) and acholi (1.1 million) in northern Uganda are most numerous.

The population mainly feeds on agriculture, supplemented to varying degrees depending on local conditions with livestock management. In the arid northeastern part of the country, where caramjong (345,000) and sebei live, livestock management is the dominant industry. At the lakes and after the Nile, fishing also plays an important economic role in the local economy. Coffee, cotton and tea are grown as salad crops.

Traditionally, the larger bantu groups were organized in the kingdom, among which the most prominent was Buganda, with its heavily consolidated centralized political system, Bunyoro at the beginning of the colonial era., Toro, Busoga and Ankole. Among the nilotic groups, for example, acholi and alur (818,000) were organized in smaller states or the chiefdom, while others such as karamojong and langi had an acephalic social organization without political leadership. Patrilineal descent groups had great political significance among all peoples. In nyoro, toro (917,000) and, in particular, nkole, the hierarchical division between shepherd culture and agricultural culture played an important social and political role. Here they formed livestock-owning huma (at nyoro and toro) and hima (at nkole), an aristocracy in relation to the agricultural majority of the population called iru (a division similar to that between tutsi and hutu in Burundi and Rwanda).). In the border areas against Kenya living a small mountain population, porticoes(8,800), who were formerly hunters and gatherers, but because of extensive changes in their conditions, were forced to switch to agriculture. In the northeastern part of the country, madi (250,000) live as farmers and fishermen. In southeastern Uganda live a few thousand branches, a pygmy people, who live in search of hunting. Another pygmy group is nsua, which is estimated at 1,000 individuals. Until 1972, there was a significant South Asian population in the country, which was banished by Idi Amin. Only a small number have returned later; the South Asian population is now estimated at just over 10,000. 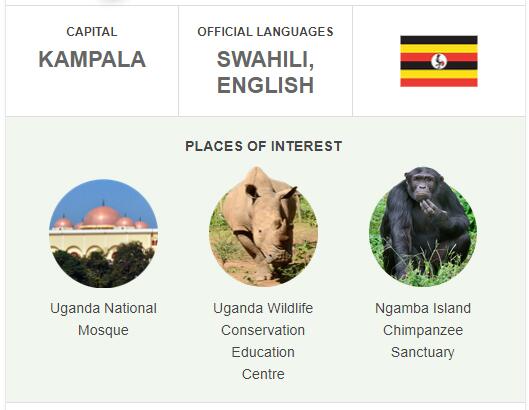 In Uganda, some 40 native languages ​​are spoken. They belong to two language families, the Nilo-Saharan languages, of which teso (8% of the population), lango (6%) and acholi (4%) are the largest, and the bantus languages ​​(zone J) in the Niger-Congo languages, of which Luganda (17%), gisu (4%), kiga (7%), rwanda (2%) and soga (6%) have the most speakers. English and Swahili are official languages. Swahili is widely used as an interpersonal language. See also Population and Ethnography above.

More than 85% of Uganda’s population belong to any Christian church. Among these are almost as many Protestants (just over 37% of the population) as Catholics (just over 40%).

Among the Christians there are also a number of evangelical, pentacostal and charismatic communities, which together have just under 5% of the population as members. In addition, Jehovah’s Witnesses, Seventh-day Adventists, the Salvation Army, Quakers, Baptists, and Orthodox Churches are represented in the country.

Muslims comprise just under 12% (2010) of the population; their numbers decreased, as did the Hindus, through Idi Amin’s expulsion of Asians in the early 1970s. The majority of Uganda’s Muslims are Sunnis and follow Shafi’ite law school.

More than 2% of the population is estimated to mainly comprise traditional African religion. However, as in many other sub-Saharan African countries, there is a great deal of syncretism in the general practice of religion. Ancestral and spiritual cult are also important elements for many Christians and Muslims. Baha’i supporters, almost 100,000, constitute a significant minority in some urban environments, and Kampala has one of the few Bahá’í temples in the world. There are also more than 3,000 Jews in the country.