According to Countryaah, Ukraine has a population density of 74 residents per square kilometer. The largest concentrations are found in the industrial regions of the eastern parts and in the southwest. In 2019, 69 percent of the population lived in cities, of which the capital Kiev (in Ukrainian Kyiv) was the largest. Other cities include Kharkiv (1.4 million residents, 2015), Dnipro (to 2016 Dnipropetrovsk, 989,800) and Donetsk (936,300).

The natural population growth during the post-war period has been low, periodically even negative. This is reflected in the age distribution of the population, which is characterized by a relatively large proportion of middle-aged and pensioners.

According to the 2001 census, the population consisted of Ukrainians (77.8 percent), Russians (17.3 percent), Belarusians (0.6 percent), Moldavians/Romanians (0.5 percent), Crimean Tatars (0.5 percent) and Bulgarians (0.4 percent). Among a large number of smaller ethnic groups there are also Hungarians, Romanians, Poles, Greeks and Tatars represented by about 100,000 or more individuals.

The emigration to other countries has been great since the 1990s. This also applies to the ethnic minorities, where the Jewish group in particular has rapidly reduced in number through emigration. In 2012, it was estimated that there were 67,000 Jews left in the country.

Most of the Greeks are in the province of Donetsk, but also in Crimea and Odessa. The Bulgarians are found especially in Bessarabia in the Odessa province. The number of Roma is disputed, but official statistics indicate 47,000. They live scattered across the country but the strongest concentration of settlements is in the Carpathian region. The Crimean Tatars live mainly on the Crimean Peninsula, while a majority of the country’s 32,000 gagauz are located in southwestern Ukraine. Romanian-speaking minorities (Moldavians, Romanians) live in the south-western parts of the country.

Ukrainians make up the majority in most regions except Crimea; however, the largest proportion live in the western and central parts of the country. The Russian residents are mainly concentrated in the major cities and in the eastern parts of the country (Zaporizhia, Donetsk, Luhansk and Kharkiv provinces), in Crimea and in Odessa in the southwest. Many of the country’s residents work abroad, often illegally, especially in Europe, Turkey, the Russian Federation and North America. 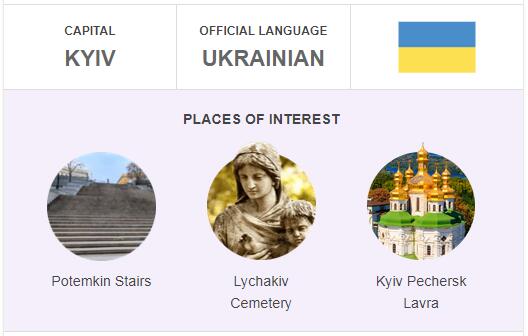 The official language is Ukrainian. Especially in eastern Ukraine, Russia has a strong position. Minority languages include Polish, Belarusian, Bulgarian, Romanian and Greek.

Kiev became the center of the Christian mission among the East Slavs since Grand Duke Vladimir was baptized in 988. When Ukraine was conquered by the Mongols, the metropolitan seat was moved to Moscow; Ukraine’s Orthodox Church has since been counted as part of the Russian. An unsuccessful attempt to connect it to Rome in 1596 led some of it to separate and form the Ukrainian Catholic Church.

During the 20th century, several attempts were made to establish an independent Orthodox church in Ukraine, especially after the fall of communism. This has resulted in internal church disputes. Most of the population belongs to an exarchate under the Moscow Patriarchate. It bears the name of Ukraine’s Autonomous Orthodox Church, and is the only one canonically recognized by the Orthodox Churches in the world. In 1989, there was an outbreak of parishes that wanted a national Ukrainian church with no ties to Moscow, and it appointed a patriarch of Kiev. During the Filaret (from 1995), the Kiev Patriarchate has developed into Ukraine’s second largest church. An additional jurisdiction is Ukraine’s autocephalous Orthodox Church, which stems from previous attempts to create a Moscow-independent Ukrainian church. The two attempts to create a national Ukrainian Orthodox Church have not been able to unite.

The Ukrainian Catholic Church is found mainly in western Ukraine (Galicia) and has the same liturgy as the Orthodox Church. According to a census, there are also about 2% Catholics with Latin rites (at the border with Poland) and 2% Protestants. The Pentecostal movement and other Western movements have had some success. There are about half a million Muslims (mainly Crimean Tatars) and more than 100,000 Jews.

In the important parliamentary elections in March 2006, which would lead to a government appointment based on the parliamentary majority (the president now only controls the appointment of the Foreign and Defense Minister), Yushchenko’s Party of Ukraine made a relatively poor choice with 14 percent of the vote. Julija Tymoshenko Bloc gained 22 percent, while Yanukovych’s Regions Party became the election winner with 32 percent. The election results led to protracted political tensions, and only in August did Yanukovych manage to stack on his feet a coalition with the support of Our Ukraine in the Verkhovna Rada.

Expectations for the new regime were met to varying degrees, but the position of democracy was clearly strengthened. In the spring of 2007, a constitutional crisis arose in the relationship between the President and the Verkhovna Rada, and an extraordinary new election was held in September. After lengthy consultations, the Julija Tymoshenko Bloc and Our Ukraine formed a coalition government characterized by internal struggle and power struggle.

The coalition collapsed in the fall of 2008 due to disagreement between Prime Minister Tymoshenko and President Yushchenko on how Ukraine should respond to Russia’s use of power in Georgia. In the 2010 presidential election, in which Tymoshenko and Yanukovych were the opposite candidates in the second round, Yanukovych won by a margin of 3.5 percentage points. Tymoshenko refused to recognize the election results, and resigned as prime minister after a distrust vote in the Verkhovna Rada.

In 2013–2014, Ukraine was hit by a political crisis that exceeded the scope of the Orange Revolution. In November 2013, President Yanukovych refused to sign a cooperation agreement with the EU, triggering riots and week-long demonstrations.

The protests against President Yanukovych, which began in November 2013, increased in size in December after police used violence to remove protesters who had entrenched themselves at Independence Square (Majdan nezalezjnosti) in the center of Kiev. Political opposition tapered off a couple of weeks later in December when Russia’s President Putin gave Ukraine a new gas deal with a price cut on natural gas. For Russia, Ukraine is an important part of the country’s ambitions for a Eurasian customs union that is a counterbalance to the EU and NATO.

In January and February 2014, the protests turned into a violent riot with dozens of people killed. On February 21, Yanukovych and opposition politicians Arsenij Jatsenjuk, Vitalij Klitschko and Oleh Tjahnybok signed an agreement to end the crisis. The agreement had been negotiated with the help of the EU and Russia and involved constitutional amendments, new elections and ceasefire. But that same evening, the president left the city and on February 22, 2014, Parliament decided to oust Yanukovych. The newly elected MP Oleksandr Turchynov took over as the country’s interim head of state. On the same day, imprisoned opposition politician Julija Tymoshenko was released. On February 26, Arsenij Jatsenjuk was appointed acting prime minister.

Parliament resolved to hold a new presidential election in Ukraine on May 25, 2014. Petro Poroshenko passed the victory with 54.7 percent of the vote already in the first round and was elected as the country’s new president on June 7.

At the same time, Ukraine was affected by political uprisings on the Crimean Peninsula and in the easternmost provinces.

In the days following Yanukovych’s resignation in late February, central buildings in both the Autonomous Republic of Crimea and the city of Sevastopol were occupied by Russian and Russian-backed masked men. In practice, this led to the Kiev authorities losing control of Crimea. On March 16, a referendum was held on the peninsula, which was highly disputed internationally, but provided a massive majority for reunification with Russia. On March 18, an agreement was signed between the Crimean and Sevastopol leaders on the one hand and the Russian Federation on the other on inclusion in Russia. In fact, Sevastopol and the Republic of Crimea were thus included as two new federation subjects in Russia.

The eastern parts of mainland Ukraine also experienced political protests against the new government in Kiev, which eventually went into armed uprising. From mid-April, central buildings in cities in the provinces of Donetsk and Luhansk were occupied by armed groups, which eventually established the people’s republics of Donetsk and Luhansk. On May 11, a controversial referendum was held which should have resulted in clear support for the local people’s republics. On May 22, the two units joined forces in the Novorossija Federation (“the new Russia”).

Developments in the eastern part of the country have been met with sharp reactions from the Kiev authorities, which has launched an “anti-terrorist operation” (ATO) to regain control of the area. However, this has proved to be a difficult task, both because the Ukrainian defense has been in poor condition and because the separatists have received extensive support from Russia. The result has been a civil war-like state with thousands of killed and hundreds of thousands of internally displaced refugees. A ceasefire agreement between Ukraine, Russia and representatives of the two people’s republics was signed in Minsk in early September, but failed to end the fighting.

The conflict gained a heightened international interest on July 17 when a plane from Malaysia Airlines was shot down over Donetsk province. All the 298 on board the plane that was en route from Amsterdam to Kuala Lumpur perished.

In October 2014, parliamentary elections were held in Ukraine. The election took place despite the fact that the inhabitants of the Crimean peninsula and in parts of the Donetsk and Luhansk provinces could not participate. This also led to the filling of only 422 out of a total of 450 seats in parliament. President Poroshenko’s party became the largest party, with 132 seats.

Prior to the election, Prime Minister Jatsenjuk had established the new Party of the People’s Front along with President Oleksandr Turchynov. The party made a surprisingly good choice and became the second largest party in parliament. The strong election gave Jatsenjuk the initiative in the government negotiations and he was elected prime minister for a broad coalition government consisting of the People’s Front, Petro Poroshenko’s Bloc, the Self-Help Party, the Radical Party and the Fatherland Party.

In January 2015, the conflict in eastern Ukraine caught fire again, with fierce fighting especially around the strategically important airport in Donetsk, which was eventually conquered by the separatists. Warfare was intensified along the entire front line. A particularly important blow was at the railway junction in the small town of Debaltseve.

The renewed acts of war led to intensive diplomatic negotiations under the auspices of the OSCE, involving political leaders from Germany, France, Russia and Ukraine. These led to a new ceasefire agreement, the so-called Minsk II agreement. The agreement would include a ceasefire monitored by the OSCE from 15 February, withdrawal of heavy weapons from the front lines, exchange of prisoners of war and constitutional reform in Ukraine. It was signed by the OSCE, representatives of Ukraine, Russia and the self-proclaimed people’s republics. The agreement has been complied with only to a limited extent, although the fighting actions have been significantly reduced compared to the period before the agreement was concluded.

In February 2016, Jatsenjuk’s government was met with harsh criticism at the National Assembly, particularly related to lack of reform. Motions of distrust were raised which received strong support from the president’s party Petro Poroshenko’s block “Solidarity”, but which lacked 32 votes to win. Two months later, in April 2016, Jatsenjuk announced his departure. He justified this because the game around his position as prime minister had gotten in the way of the important reforms the country needs. On April 14, Volodymyr Hrojsman from Petro Poroshenko’s block “Solidarity” was voted new Prime Minister by Parliament.