In December 2010, the government had to step down after losing a vote of confidence. New Prime Minister became Sato Kilman. However, he held off only for a new distrust vote in April 2011. The following months were marked by several different governments as various courts dismissed the sitting government. After several replacements, however, Kilman could only continue. But only until March 2013, when eight members of government changed sides to the opposition. New Prime Minister was Moana Carcasses Kalosil. Kalosil focused on global climate change with the creation of a new Ministry of Planning and Climate Change, and also stood out as solid support for the Papuan people in Irian Jayaand their fight against Indonesia. He further stated that he would clean up the previous governments’ sale of diplomatic passports. A few days after the takeover of power, 10 diplomatic passports were withdrawn, and it was estimated that about 2/3 of the country’s “diplomats” had simply bought themselves for passports. 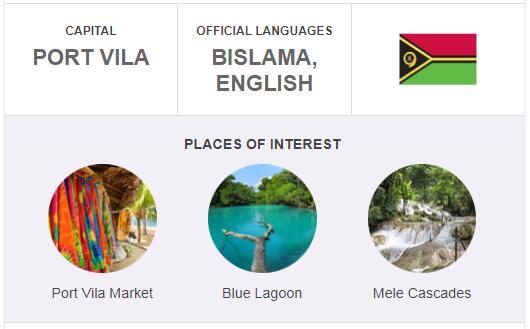 Kalosil only held as prime minister until March 2014, when Joe Natuman took over the post.

Baldwin Lonsdale was named president in September 2014. He was elected to an electoral college made up of the country’s MPs and provincial governors. The college had to go through 8 electoral rounds before Lonsdale could be appointed.

According to Countryaah, the unstable political situation in Vanuatu continued through 2014 and 15. In June, Prime Minister Sato Kilman fired from the post of Foreign Minister. A week later, Kilman overturned Natuman by a distrust vote. In October, half of Kilman’s government was arrested and charged with corruption. Including Deputy Prime Minister Moana Carcasses. Kilman himself declined to comment on the corruption and instead left the ministers at their post to the point where they were picked up by police.

The State of Vanuatu is formed by an archipelago of about forty islands, partly volcanic, partly madreporic, located about 2000 km from the north-eastern coast of Australia. The major islands are Espiritu Santu, in the northern group, Malakula and Éfaté, in the two central groups, and Erromango, in the south. The territory is mainly mountainous; maximum height is that of Mount Tabwemasana (1879 m) on the island of Espiritu Santo. The climate is subequatorial, with high temperatures all year round and very abundant rainfall (2000-3800 mm per year).

Almost all of the residents (98.5%) are of Melanesian stock. There are also small minorities of Europeans (about 2500 people) and immigrants from various parts of Asia and Oceania, who have come to the country to work on the plantations. The demographic increase (1.3% in 2009), although declining in recent years, remains quite strong, as well as the birth rate (21 ‰). About 80% of the population lives in villages, mostly located along the coasts. The only urban center is the capital Port Vila (45.694 residents In 2009), on the island of Éfaté, which carries out port and commercial functions.

In addition to English and French, bislama, a language of Melanesian origin enriched with many English terms, is the official language. The population is almost entirely Christian, mainly Protestant, with a non-negligible Catholic minority (13.1%). Animist cults survive in isolated areas of the interior.

Vanuatu’s economy is based almost exclusively on agriculture, above all on the production and export of copra, a crop that is however exposed to the risks of frequent climatic catastrophes. Since the 1990s, the government has implemented a diversification plan that has focused above all on the development of the tourism sector. However, the economic take-off still appears to be blocked by the scarcity of infrastructures, by the clear prevalence of activities linked to foreign capital and, fundamentally, by the geographic isolation of the archipelago. The agricultural sector contributes 26% to the formation of the GDP and employs over 60% of the workforce. In addition to copra, the main export items are cocoa and coffee; for the rest, subsistence products prevail (corn, cassava, taro, yams, fruit, vegetables). The breeding, especially pork and cattle, and fishing guarantees good income. Apart from small reserves of manganese, mineral resources are negligible and hydrocarbons are completely lacking. Industry (12% of GDP; 5% of the workforce) is almost exclusively based on the processing of agricultural products. Privileged tax conditions have allowed the development of financial assets offshore.