The average population density is 288 residents per km2. But that figure is highly misleading because a very large part of the population lives in the two river valleys and in the delta areas. Particularly densely populated is the area around the Red River in the north, where the density may in some parts amount to nearly 1,000 residents per km2. Despite considerable relocation in the late 1970s and during the 1980s, mainly by ethnic Chinese (boat people), the population increase was 2.4 percent per year. According to Countryaah, as a result of the child restraint policy, the number of births decreased significantly. Survival opportunities have increased, and in the years 2005-15, birth and death rates have been estimated to average an average of 17.3 per milliliter and 5.4 per milliliter each year. The international relocation is now small and the population increase in 2015 was just under 1 percent.

Large relocation programs in the late 1970s and during the 1980s meant that more than 5.5 million people were relocated to the new coastal economic zones and to new cultivation areas in the central highlands. It eased somewhat on the population pressure on the river plains. But in recent years, the pressure has again increased sharply through the extensive move in as the metropolitan areas have been industrialized. Urbanization is more extensive in the south than in the north, but in 2017, no more than 33 percent of the population lived in cities. The largest cities are Hô Chi Minh City (6.6 million residents of the city itself, 2017), Hanoi (3.4 million) and Đa-Năng (915,000).

Vietnam’s population is officially divided into 54 officially recognized ethnic groups. The ethnic Vietnamese (Viet or Kinh) are the largest group and make up 87 percent of the total population. The other groups vary in size. The people groups tai, thai, muong, hoa and khmer are made up of about a million people each. Other groups, for example o you and o mom, consist of only a few hundred people.

Vietnam’s population is traditionally divided into three groups based on the language families to which they belong: the Austro-Asian group (to which speakers of the linguistically unrelated Kadai and Hmong communities are spoken in this context), the Austronesian and the Sinotibetan. The Austro-Asian, which is the largest, includes, among others, Viet, Tai, Thai, Muong, Nung, Khmer, Hmong and Dao. The Austronesian language family usually includes jarai, e de and cham groups. The Sinotibetan family includes the large minority of the Hoa (ethnic Chinese) and a number of smaller groups living at the border with China.

The ethnic Vietnamese have mainly lived in the delta areas around the Red River and the Mekong River as well as in the coastal areas. The minority groups have, with the exception of hoa, khmer and cham, been resident in the highlands. The picture is complicated by the fact that the national government has implemented various relocation programs with the aim of reducing the population pressure in population-dense areas, such as the participation of the Red River, and with the aim of integrating ethnic minorities in the nation state. Except for the Vietnamese nation-state, the ethnic minorities have been largely shaped by European and American interests and perspectives. The central highlands and its residents took on a strategic key role for French missionaries, colonial administrators, plantation owners and later also for the US military.

Agriculture is the most important economic sector in Vietnam, and about three-quarters of the population support themselves by cultivating the land. Rice is the most important staple crop both among the ethnic Vietnamese and among the minority groups. But there are also other crops, such as corn, sweet potato, cassava and beans. In the Mekong delta and the central highlands, rice cultivation has long been combined with commercial crops such as rubber, coffee, tea, sugarcane, tobacco, jute and fruit. Often agriculture is combined with other supply strategies. In the Red River delta, it is common for individual households to stick with a smaller fish farm in the garden. Pets such as pigs, chickens, ducks, dogs and buffaloes are kept for house use as well as for sale. A distinction is usually made between resident and nomadic minority groups. The residents are the largest in number and provide themselves mainly by growing rice and in the south also commercial crops. Hoa belongs to the resident minority groups, but primarily supports themselves through trade and small business. The nomadizing groups (for example, hmong and dao) usually support themselves by conducting various types of sweden agriculture. The increasing population pressure in combination with the government’s relocation program has reduced the availability of land and thus reduced the possibility of efficient and environmentally sustainable sweat farming. 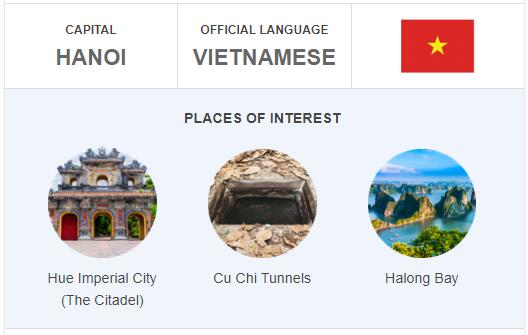 The official language is Vietnamese, which is spoken as a native language by about 85% of the population. In the mountainous parts of the country, fifty minority languages are spoken. Some of them, e.g. muong, bahnar and mnong, are monkhmeric, as well as Vietnamese. In the north, a number of Thai languages ​​are spoken. thô and the related black tai, red tai and white tai. In the north, hmong and mien are also spoken, and in central Vietnam some Austronesian languages are spoken. cham and jarai.

In officially secularized Vietnam, over half of the population is Buddhist. Many Vietnamese practice a mix of Mahayana Buddhism, Taoism and Confucianism. The Government Agency for Religious Affairs states that an estimated 12 percent of the population practices Mahayana Buddhism. Most of these belong to the Chinese people (see Population). Theravada Buddhism is practiced primarily by the country’s just over 1 million Khmer.

Another new religious movement in Vietnam is Hoa Hao, which is characterized by a popular interpretation of Buddhism. It was founded in 1939 by Huỳnh Ph迆 Sô (1920-47). The movement is a continuation of the variant of Buddhism practiced by the mystic Đo角n Minh Huyễ (1807-56). Both Đo角n Minh Huyễ and Huỳnh Ph迆 Sô are seen by the followers as Buddhas, who are to save humanity from suffering and protect the Vietnamese nation. The movement has neither buddha statues, pagodas nor temples. Therefore, in prayer, believers turn their faces to India, the birthplace of Buddha. The movement has its strongest roots among farmers in the delta of the Mekong River. Here, the movement was socially, politically and militarily dominant until 1975, the year when the Vietnam War ended. Like Cao đai, Hoa Hao is a strong nationalist movement. It had its own army, which supported the Japanese during the occupation.

Indigenous folk beliefs and animism live alongside the established religions and have not infrequently influenced them. This type of religiosity is covered by just over a tenth of the population.

In 2010, the share of Christians was stated at just over 8 percent. The first Catholic missionaries were Portuguese, who arrived in the country in the early 16th century. However, it was not until the Jesuits arrived in the early 17th century that the Catholic Church was established. Today, the government states that about 7 percent of the population is Catholic. Catholics are scattered throughout the country, but with concentration in the provinces around Hô Chi Minh City and Hanoi. In recent years, Catholicism has been met by increased interest on the part of the people. New churches have been built and more and more want to become Catholics and work in the church. Other Christian churches have few members. The government estimates the number of Protestants to be 61,000, while the Protestants themselves expect just over 160,000. There is information that the number of Protestants in recent years has increased sharply, which is partly believed to be due to an increased number of unregistered evangelical parishes. There are also small groups of Jehovah’s Witnesses, Bahai, Mormons, and Jews. The Jewish community is growing and it has a synagogue in Hô Chi Minh City.

There are about 50,000 to 80,000 (according to the government, 67,000) Muslims in the country, and mosques are found in Hô Chi Minh City, Hanoi and in some provinces in southern and southwest Vietnam. About half of the Muslims are Sunni, while the other half practice Bani Islam, which has strong elements of both Hinduism and Buddhism. This type of Islam is unique to the Cham people, who were originally Hindus, and who today live primarily in the provinces of the south coast. Bani Islam is distinguished in part by having a priesthood called acar. It is only those who have the right to read the Qur’an. Prophet Muhammad and Abraham are as much gods as Allah, the mosques are adorned with dragons and with the Taoist yin and yang emblems, the priests fast on behalf of the faithful during the Ramadan, circumcision is simulated and alcohol and pork are allowed with some exceptions.

In the country there are also small groups that profess to Daoism, Confucianism and Hinduism.

According to Article 70 of the 2001 Constitution, all citizens have freedom both to and from religious beliefs and practices. According to the same article, all religions are equal before the law and all places and premises used for religious ceremonies are protected by the law. Furthermore, it is stipulated that no one has the right to restrict religious freedom or exploit it to violate law and order. In practice, religious freedom is limited by regulations and decrees according to which religious activities that threaten the unity or cultural tradition of the nation are illegal and must cease. According to the decree, the latest from January 1, 2013, many permits are required for a religious organization to be approved by the government agency for religious affairs, which has resulted in both local and state bureaucracy increasing its control over the religious organizations. Full state recognition gives the right to open, operate and renovate premises for religious activities as well as to educate priests and to publish materials. The state directly or indirectly controls all publishing of religious material. The government recognizes 37 religious organizations affiliated with eleven recognized religions. Among these are Buddhism, Islam, Bahai, Catholicism, Protestantism, Hoa Hao and Cao đai.

Religious teaching is prohibited in public schools. Religious affiliation is indicated on national identity documents. Despite all restrictions, the government has recently shown an increased goodwill towards religion and religiosity.

The country does not celebrate religious holidays as national holidays.