On the so-called miombo water, there are, among other things, African elephant, African buffalo, sable antelope, larger kudu, giraffe and common zebra. Rhinos have been hunted hard for the horns and are now very rare. Predators include: spotted hyena, jackals, hyen dog, lion, cheetah, leopard and serval. The large amounts of termites on the miombose water attract termite-eating mammals such as ground pigs and earthworms.

The extensive swamp and flood areas have a very species-specific and individual bird fauna with, among other things. many species migrate and stork as well as migratory birds from Eurasia and parts of Africa. There are also screaming eagle (national bird), hippopotamus and nile crocodile. Among the many snakes are night-worms, black mamba, boom snake, spit cobra, rock surface and blindworms.

In 2010, there were 19 national parks in Zambia, and just over 8% of the country’s area was nature protected. The largest park, Kafue, covers about 22 400 km2. A large number of reserves have been allocated to protect plant life. 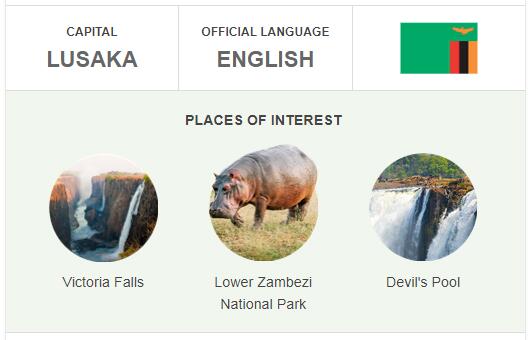 (For the kinship terminology below, see pedigree.)

Most of the peoples of Zambia belong to the so-called matrilinear belt in Central Africa, which is characterized by matrilineal lineage, a prominent role for female maternal spirits, special initiation rites for girls, a strong emphasis on women’s fertility and a relatively independent role for the adult, married, whose interests are safeguarded by her uncle. These elements are particularly strongly emphasized within the bemba-lamba-kaonde group, which also applies matrilocal residence and bridal service, ie. The groom works for the bride’s family instead of paying the bride price. However, some people in the upper Zambezi group have patrilinear features. Lozi differs from other peoples by applying bilateral provenance principle. In addition, a newlywed couple can choose where they want to settle.

The people of Zambia apply settlement in small, compact villages with round huts and in the southern part often a surrounding palisade with room for livestock. In northern and eastern Zambia, however, livestock management is prevented by rainforests and tsetse flies. Instead, agriculture is complemented by hunting and fishing. Agriculture is the main industry in both northern and southern Zambia. Agriculture is managed by women, while men’s efforts limit themselves to burning and clearing new land. The most important crops have traditionally been sorghum, millet and fingerhirs, which, however, are increasingly being forced out of maize. In addition, cassava (cassava), peanuts, peas, beans, sesame and jams are grown.

At Lukanga Lake, there is a Lenin-speaking fisherman population that is classified as lukanga twee (see twee). In the Bangweul outcrop lives another fisher population, also called twee and once studied by the Swedish ethnographer Eric von Rosen. At the moist meadows along the Kafue River, kafwe twee and related groups live, also as fishermen and collectors. Also in the Luapula swamp are two groups that live as fishermen and collectors. In the south-eastern parts of the country there is a small hunter group called kwandu (5,500). There are also san (1,600) in the western parts of the country.

The traditional political organization rests mainly on local chiefdom, although there are still remnants of the sacred kingdom, especially in the northern parts of the country. Like its neighbors in southern Congo (Kinshasa), the people of Zambia have a richly developed ritual life, partly in connection with so-called regional cults, where the soil’s fertility is the focus, and in connection with a variety of spirit cults, which are mainly associated with healing. In addition, rituals with spirit possession of deceased relatives are common. Especially in the northern parts of the country, there is a richly developed wood sculpture tradition alongside a similarly rich musical life, which has its main roots in ritual contexts.