In 1889, the Ndebele King Lobenguela received the English adventurer and millionaire Cecil Rhodes. Against weapons, a lifetime pension and a steamer, the King gave British South Africa Co. (BSA) monopoly on exploration and extraction of the country’s mineral resources. The BSA was Rhodes’ personal property. The colonization of Zimbabwe was thus initiated. The British government gave BSA control over the trade, emigration, communications and police in the country of Matabele. The transfer of such privileges on the part of a foreign government could not take effect until they had been “formally and freely” approved by King Lobenguela, who sat in the capital Bulawayo. On the basis of war list, Rhodes installed himself with 200 British settlers and protected by 700 «policemen» in Shonaland where they created a fortified fortress they called Salisbury. They had only been allowed to “dig a well” there, and, moreover, had no rights, but they were supported by the British Government, who looked closely at where the border was between one and the other people. 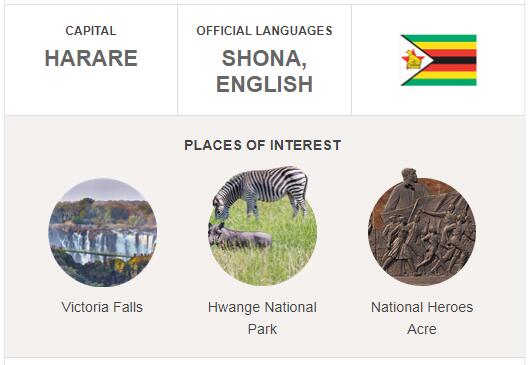 According to Countryaah, Rhodes now organized a military campaign north to submit to new territories. Most recruited to his personal army were mercenaries from South Africa, and their share of the prey became land and mining rights. The occupation was met with fierce opposition from the African locals. Among other things. because Rhodes’s “police” created a number of conflicts. Under the pretext of capturing some ndebeles who had allegedly stolen cattle from some Shona people, they attacked Bulawayo in 1895. The king had to flee into the jungle, and from then on his country was ruled by the BSA under the name of South Rhodesia.

In 1923, the country gained “responsible, internal self-government”, subject to the British crown. In practice, the white minority had free hands, and Britain never broke in to prevent oppression or racial discrimination.

As a “settler colony” based on a direct occupation of land, Zimbabwe had many features in common with South Africa. Until 1980, the economic and political basis was based on the provisions on land distribution and the role of the blacks as low-wage labor in European-owned mines, factories, estates and plantations. Locals were squeezed into reserves and about half of all land was registered as “white areas”. Around 1960, the whites sat on about 70% of the land.

The 1930 Law – revised in 1969 – regulated in detail which areas were “European” – ie. the areas where the soil was most fertile and where mineral deposits, cities and transport centers are located. In 1969, the European share of the population was less than 4%, ie. 250,000 out of 6 million. As the reserves could not guarantee the Africans a reasonable basis for living in agriculture, the male population was squeezed into wages. A comprehensive system of rules and coercive measures was further implemented to prevent African farmers from competing with the settler economy. The laws and state apparatus were built to serve European interests and there was no opening for African political participation. At the same time that the industry was being built, which was done both with foreign capital and with state aid,

In the 1950s, Zimbabwe formed a federation with Zambia and Malawi, and there were some liberal elements, not least during Garfiel Todd’s reign (1953-58). But economically, the period also meant strengthening the power of the white minority. Especially through the development of industrial markets in neighboring countries and the transfer of tax funds from the copper mines in Zambia. In 1963, the federation was dissolved while the most extreme European party – the Rhodesian Front – took over the hegemony of the European people. The party’s immediate goal was to prevent a “decolonization” of the usual model.

On November 11, 1965, the Front issued a unilateral Declaration of Independence (UDI), and Ian Smith’s illegal minority then ruled the country until the late 1970s. This regime was never recognized by any other country, but was instead met with financial sanctions, adopted by the United Nations Security Council in 1968. However, the sanctions were bypassed by both Mozambique (before 1975), South Africa and the United Kingdom. to South African companies strengthening their position in the commodities and industrial sectors. In addition, a number of new laws were implemented to strengthen the apartheid-like system.

At the election of a new national assembly in 1985, ZANU went further, and the party secured a pure majority in all elections for the next 15 years. In 1987, the 20 white seats reserved for the white minority were abolished under the Constitution. From 1988, another constitutional amendment, which abolished the prime ministerial position and made the presidential post, with Robert Mugabe as president. In the fall of 1987, ZANU and ZAPU were merged into one party, ZANU-PF. This was part of an attempt to establish a one-party state, which however was later stated. But in practice, ZANU-PF’s political dominance made the country a one-party state, until new opposition parties were formed in the 1990s.

The Zimbabwe Unity Movement (ZUM), led by the defunct ZANU veteran Edgar Tekere, achieved significant support in the 1990 elections, but was given little room in parliament due to the electoral system. Texans voted against Mugabe in the presidential election, gaining 17 percent of the vote. Several parties voted in the 1995 parliamentary elections, but ZANU-PF retained its support of over 80 percent of the vote. Only one party (ZANU-Ndoga, who was also represented in the 1990 elections) in addition to the ruling party was elected in the National Assembly. In the 1996 presidential election, Mugabe obtained 92.7 percent of the vote; two veterans from the fight against minority rule – Abel Muzorewa and Ndabaningi Sithole – opposed him, but withdrew just before the election.