Dominican Republic, officially Spanish República Dominicana, state in the Caribbean Sea with (2018) 10.6 million residents; The capital is Santo Domingo. The Dominican Republic comprises the eastern part of the Greater Antilles island of Hispaniola.

Like many of the other Caribbean states, the Dominican Republic is densely populated – in 2019 the average population density was 219 residents per km2 – and has a relatively high degree of urbanization (80 percent).

Many Dominicans emigrate to Puerto Rico or the United States annually, usually illegally. At the same time, the country receives thousands of Haitians annually. Many of the Haitians live in difficult conditions. This situation worsened further after the 2010 Haiti earthquake.

According to Countryaah, the country’s capital Santo Domingo (2.6 million residents, 2012) is the most dominant city. Other cities include Santiago de los Caballeros (550 800). 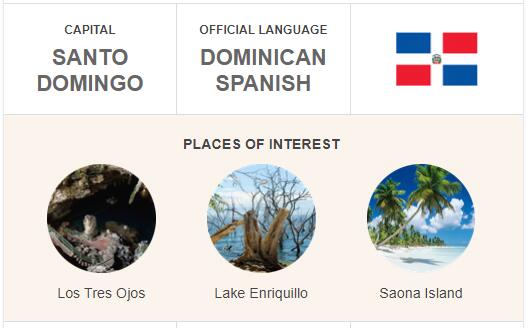 The official language is Spanish, which is also spoken by most of the population. Hundreds of thousands of Haitian immigrants and their descendants speak a French-based Creole language. In the Dominican Republic, a slightly Creole form of English is also used by descendants of freed American slaves who in the 1820s immigrated to the urging of the Haitian Occupation Force.

Christianity dominates and comprises 95 percent of the population. The Catholic Church is the largest among the Christian communities with over 80 percent of the population as members. Protestants make up about 8 percent, and among them, the seven-day Adventists are the most. Various government sources state the number of Muslims is between 5,000 and 10,000. The country also has small groups of Buddhists, Jews, Hindus and Baha’is. Some Christians, however unclear, combine their faith with santería, magic and/or voodoo.

In the current constitution, which is from 2010, in the introduction God is invoked. The country’s constitution and other laws provide for religious freedom, which also works in practice. The constitution does not specify state religion, but in an agreement with the Vatican, Catholicism is established as the official religion, which gives it special privileges, such as state subsidies and customs exemption. By law, Bible reading should be included in school teaching, but this is not followed by all schools.

Santiago de los Caballeros, [- ka  a jer ɔ s], provincial capital of the north of the Dominican Republic, with (most recently collected 2010) 550,800 residents, the second largest city in the country.

Port with a free production zone.